This Chipotle Conspiracy Theory Will Make You Question Our Nation's Sanity

Chipotle, known for its steadfast and outspoken opposition of GMOs and processed food, has taken some major publicity hits over the past few months: E. coli outbreaks, subsequent store closures, a decline in sales, free burrito bribes -- you know all about it. But according to the eternally reliable Internet, its health issues might not be the result of incompetence or bad luck. Something downright dastardly may (allegedly) be happening at the highest levels in Chipotle. Namely, intricate corporate sabotage by evil, faceless biotech conglomerates who support and capitulate GMOs, those genetically manipulated foods that most of us eat every day. And to think, all this just in time for the new X-Files.

So take your tin-foil burrito packaging, fold it into a comfortable hat, place that hat on your noggin, and follow me down this rabbit hole of Chipotle truthers, Dr. Mehmet Oz, and batshit Internet conspiracy theories. It will be fun! I promise.

The rumors stem from the website REALfarmacy, where writer Mike Adams asserts that "Chipotle’s e.coli outbreaks are not random chance. They are the result of the biotech industry unleashing bioterrorism attacks against the only fast food company that has publicly denounced GMOs."

So basically, staunchly anti-GMO Chipotle's meat supply was purposefully spiked with strains of E. Coli by undercover agents of the "biotech mafia," in order to bring lasting damage to the brand and its reputation. Behind the corporate sabotage allegedly lies biotech/agricultural giants like Monsanto.

OK... I mean crazier things have happened, right? They are planning to reboot Full House this summer. By that logic, anything is possible.

Adams is the editor of Natural News, and has made a name for himself by posting the gastronomical equivalent of chemtrail posits, sandwiched between innocuous articles praising the benefits of coconut oil. He also goes by the moniker "Health Ranger" -- I think that's important to note.

Obviously, if there is even a sliver of truth contained in this mess, it would be the most prescient food controversy of our lifetime. And needless to say, the general public is getting a little riled up about the "news."

And this is just the tip of the Twitterin' iceberg.

But Adams' claims get a little sloppy. "How do we know? The CDC has already admitted that some of these e.coli outbreaks involve a 'rare genetic strain' of e.coli not normally seen in foods. Furthermore, we also know the track record of the biotech industry engaging in the most criminal, dirty, sleazebag tactics imaginable against any person or company that speaks out against GMOs," he says.

This is the lynchpin of Adams' argument, and it's based on -- get this -- a story about Dr. Oz. Though I do appreciate his use of the word "sleazebag," this Dr. Oz thing is questionable. 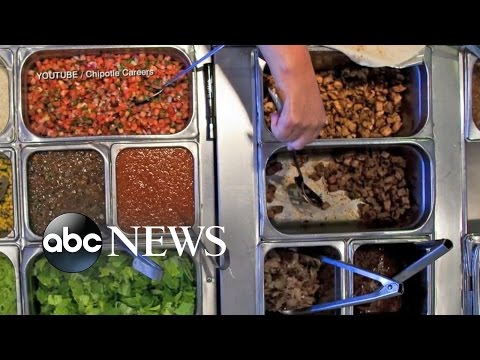 Dr. Oz vs. GMOs: a precursor to Chipotle

"Doctor Oz, for example, was maliciously targeted in a defamation campaign funded by the biotech industry earlier this year. The onslaught against Oz was initiated because he publicly expressed his support for honest GMO labeling on foods," Adams says.

This has some semblance of truth: Dr. Oz -- using his own team, of course -- deduced that some of the doctors that were slandering his name were paid shills "linked to pro-GMO groups." But aside from personal assertions, this is the only example he has to back his claims.

"As the attacks escalated, Doctor Oz had his own team investigate the source of the attacks and found they were all biotech industry shills, some with felony criminal records and long histories of dubious propaganda activities targeting anti-GMO activists," Adams continues.

Basically, people like Adams and Dr. Oz believe agricultural biotech leviathans like Monsanto -- the world's leading producers of GMOs -- paid otherwise-legitimate doctors to claim that the daytime talk show host is a no-good quack. (Like the medical community needed to be paid to think that...)

In Adams' view, if the "biotech mafia" was bold enough to go after America's favorite anti-GMO quack, they obviously would be up for skewering a Mexican chain restaurant.

If you just felt a strange gust of wind blowing across your monitor, it was my exasperated sigh after typing that last sentence.

What does Chipotle have to say about it?

Even the most absurd tasks require some level of due diligence, so I reached out to a spokesman at Chipotle, who politely, but curtly delivered this statement:

"We have seen some of those conspiracy theories, but haven’t seen any evidence to support them."

Weird. That's kind of what I said.

And what does a food historian think of the claims?

Author and food historian Rachel Laudan admitted she hadn't been following the saga closely (shocker!), but still offered some insight. "I think first of all, you have to consider that it would have been a huge risk for any corporation involved in GMO to try and sabotage Chipotle," she said. "Most of the people doing GMO, which of course goes far beyond Monsanto, are actively trying to improve their public image... something like this would be completely against their self-interest."

Is there any historical precedence for something like this happening?

"There are plenty of stories about fraud in the history of the food industry -- meat pie-makers selling pies they know are off (spoiled), or after the industrial revolution food companies using adulterants -- but I can't think of anything where you have a major food corporation undercover sabotaging another one. That doesn't mean it hasn't happened, but I follow food history fairly closely... and I can't think of anything."

Is there any possible way this could be true?

"This is an accusation... an assertion. This isn't 'Deep Throat' here, is it?" Rachel said with a laugh, "Unless (the original author) or one of his associates is willing to do a great deal more work going into this, it seems like we have better things to do than pass on rumors that appear to have no foundation. Of course, if he could come up with names, and dates, and what the corporations were actually doing -- that would change things."

No one is saying large corporations, especially those who peddle GMOs, are free from sin. But such an enormous accusation, that doesn't even discuss theories on how the alleged perpetrators were able to contaminate so much meat in the first place, is silly at best, and irresponsible at worst.

Rachel summed it up, succinctly.

"Before anyone takes it seriously, the burden of proof is on him -- or anyone -- to come up with some actual evidence. Before that, it can't be believed."

After all, if we buy into these rumors... haven't the bioterrorists already won?

Wil Fulton is a staff writer for Thrillist. He would never let the bioterrorists win. Follow him: @wilfulton.