One of the perks of working for a food website is that my colleagues and I are frequently treated to free lunch, courtesy of nearby restaurants looking to get a name out there. Free food is excellent at all times -- heck, I'd be stoked about a stupid soft pretzel if it was free -- but this is usually some top-notch stuff. One day it's a tray of sausage schnitzel, the next it's a pile of nuggets with 12 different sauces, and after that it's pizza topped with those little pepperonis that have the crispy-curly edges.

Recently, everyone was all jazzed up when a local shop sent the office catering trays full of fresh grilled cheeses. I watched as 40 of my beautiful colleagues stuffed their gaping maws with sandwiches, smiling through clacking bites and wiping greasy fingers on the plaid rolled-sleeve button-ups that they weirdly all wear for some reason.

How happy they looked, blissfully chewing away at a sandwich that was, for many, the perfect childhood comfort food, here rolled out to them on a silver platter (erm, chafing dish) as if their latchkey memories had started a hip new restaurant. But I was miserable because the filling betwixt the bread was American cheese. And I fucking hate American cheese.

I don't understand its appeal, or the appeal of its various subsets for that matter. The quesos, the ballpark nachos, the Cheez Whiz -- none of it interests me the way it does others. Even when I was a kid I wasn't into this Gak, which may explain my present aversion. Perhaps the appeal is in the memories the mouthfeel conjures. I asked two colleagues why they like American cheese, and they confirmed my suspicions: "Reminds me of grilled cheese my mom used to make," said one. "I remember Fourth of Julys growing up, eating burgers that were basically charcoal, with a slice of American and a ton of ketchup on a potato roll," said another.

What's to like about it as an adult? Is it the taste? Do you like the taste, Eric? Surely, any normally developed palate cannot think this stuff tastes good. The texture is gummy and the flavor is limp. It smells... sweaty. It feels sweaty. Honestly, it kind of looks sweaty. And yeah, it tastes sweaty, duh.

But I'm not just offended by the taste and the sticky, floppy texture. It's not even real cheese! Everyone should know this already, but it bears repeating: American cheese is not even real cheese. And fake stuff makes people fat. Look, I even sat on my living-room floor with a paring knife and a tripod for three hours to make this stop-motion video about it for a college design class six years ago: 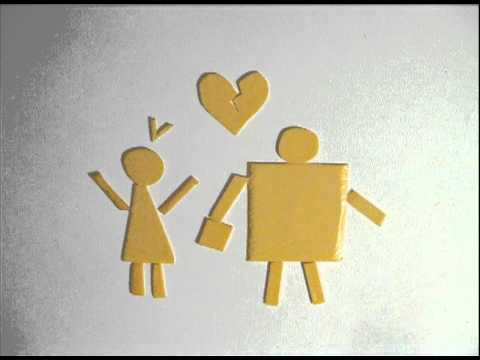 The story is as old as time: man and woman fall in love, dude eats way too many Kraft Singles, lets himself go, and the lady bails. Sad. Why should anyone bother with fake and fattening Pasteurized Prepared Cheese Product when there are so many righteous alternatives that are free of emulsifiers and saturated vegetable oils?

I frequently walk 15 minutes out of my way to the bougie-as-fuq co-op in my neighborhood to buy a brick of real French semi-soft Comte or an aged Gouda. But I also love cheaper cheeses of objectively lower quality. I'm not a cheese purist, this is simply about occasion. And there's never an occasion for American.

There is, however, a special time for every other kind of cheese, even the cheap ones: string cheese is a dope snack, Fine Cut Shredded 4 Cheese Mexican is the only thing that suits Ortega tacos, and the cheddar that sits on the shelf next to the butter in the grocery store is exquisite on Triscuits. But when a server asks me if I want cheddar, blue, Swiss, or American atop my burger, I won't even consider the latter.

"You can't beat the melt and gooey coverage that falls down the burger and even pools on the plate," CEO Rick Tasman, the owner of Atlanta's Flip Burger Boutique, has been quoted. Cheese "pools" sound mad gross, to be honest. What's wrong with Havarti? Or Swiss, or provolone? They might not render down into liquid like American, but they can cement two pieces of toast together just fine.

At the bar, sometimes I just don't feel like drinking for various reasons. I sip a seltzer disguised as a vodka soda to avoid the incredulous "Why aren't you drinking?" queries, but inevitably an effervescent friend offers me and the rest of the group shots, and my fraudulence is exposed. I'll have to reluctantly explain why I just don't want to partake, ashamedly aware of my inability to engage with the moment, to participate in an experience that everyone else enjoys. This is how not liking American cheese feels. But like, all the time, and not just when I don't want to rip a shot of cinnamon-flavored, whiskey-based liqueur.

I wish I could've shared that free grilled cheese lunch with my co-workers that day. They're lovely people, mostly! But as those lunks munched, I sat an outcast, in a prison of my preferences. So go on and enjoy your fried queso sticks, your apple pie grilled cheeses, your Philly cheesesteak donuts. I'll be over here, hiding pills for my dog in mild-flavored, semi-soft processed cheese. And that's about it.