Wingstop Is the Marie Kondo of Chicken 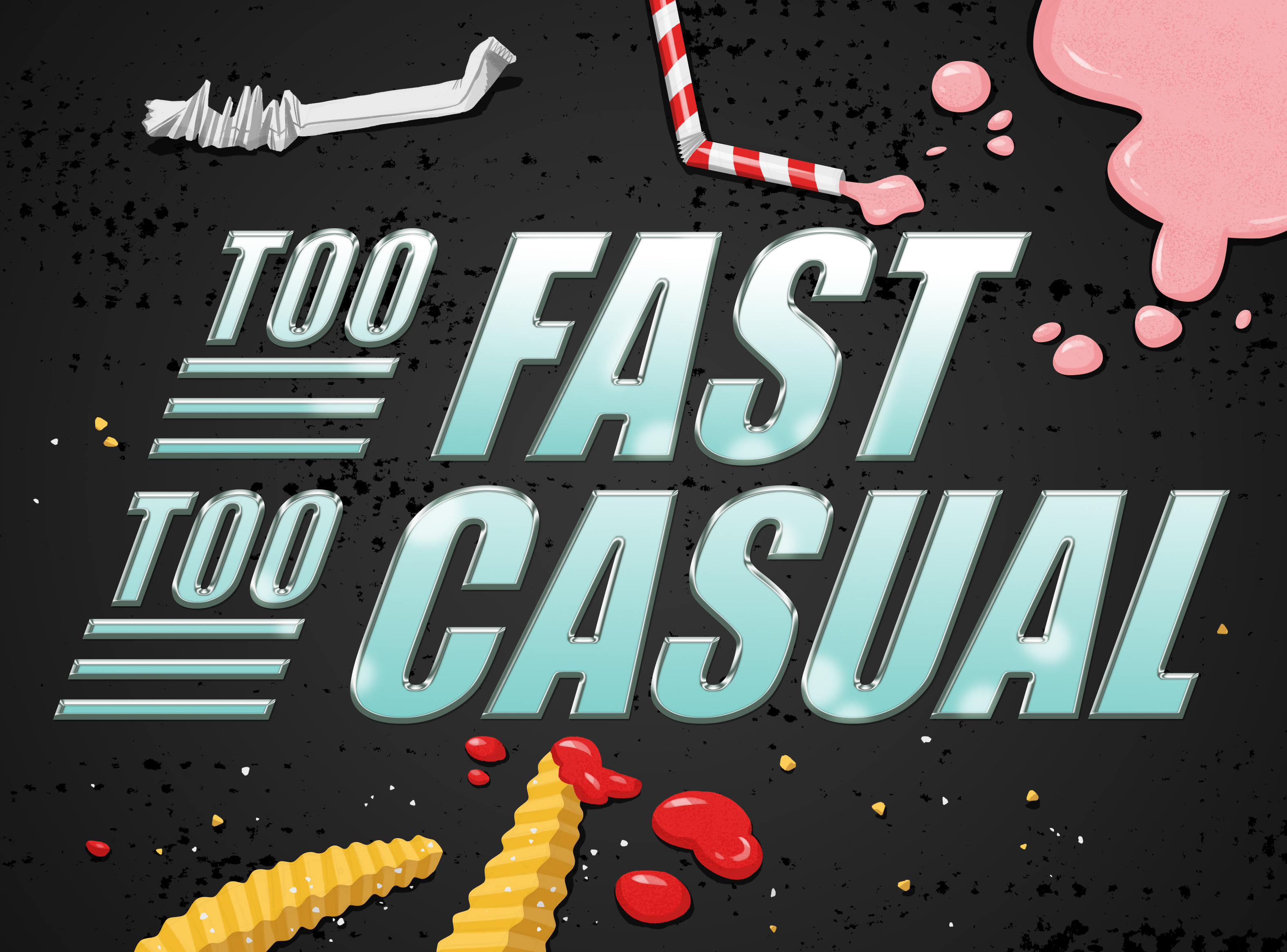 Editor’s Note: Welcome to Too Fast Too Casual, a new review series where our National Writer-at-Large Kevin Alexander takes a close look at both classic and up-and-coming fast-casual chains. The rising fast-casual trend is defining how Americans eat today, and in this series we’ll look at the food, history, decor, and branding of fast-casual chains to see what these restaurants are really trying to do, and where this is all going. Read Kevin's previous reviews of Dickey's Barbecue Pit, Five Guys , Panda Express, Jersey Mike's, Panera Bread, Lemonade, Blaze Pizza, and Chipotle, and check back in every other week for a fresh takes on more chains.

Amidst the orgiastic celebration of plant-based foodstuffs and the farm-to-table sophistry dripping off the lips of nearly every rising restaurant chain currently operating in America today, a place like Wingstop isn't supposed to work.

Wingstop does not concoct its wings from pea protein or wheat gluten or asparagus sorcery. They have not recently released a chicken sandwich to much acclaim and ballyhoo and alarmingly sweaty, breathless press coverage. They don't offer a choice of agua frescas. There is no free Wi-Fi.

They just sit quietly, mostly in small, relatively character-less strip malls, and offer up fried chicken wings and tenders in 11 different flavors with three choices for dipping sauces, and a handful of sides, all for you to take away and eat in the privacy of your own home, mostly during sporting events.

And you know what? It really f*&%ing works.

Where did Wingstop come from?

In the early '90s in the city of Garland, Texas (shout out to the Resistol cowboy hat factory!), pizza shop owner Antonio Swad began giving out samples of wings at his restaurant, and started to notice folks being more enthused about those samples than the pizza. Enlightened, he created a wing-centric spot in 1994.

Within three years, Wingstop began offering franchise opportunities, and by 2002 had allegedly sold one billion wings. As of now, Wingstop is a publicly traded company that has nearly 1,300 restaurants in nine countries, 28 of which are owned by rapper Rick Ross, aka Rozay, aka Teflon Da Don, aka A Chicken Wing Shop Entrepreneur Based Out of Florida.

Wingstop finds itself in the unique position of having lots of sort-of competitors but very few apples-to-apples competitors. Buffalo Wild Wings, for example, is primarily a sit down restaurant and sports bar franchise. Wingstreet, Pizza Hut's wing-based spinoff, exists mainly in tandem with Pizza Huts. Anchor Bar, the originator of the Buffalo wing, recently franchised but only has about 15 locations, and three of those are in Canada. Wing Zone, started in a frat house kitchen (no joke) at the University of Florida, is probably the closest thing to a one to one competitor. They have fewer than 70 locations, 13 of which are in Panama. Hooters is, well, Hooters.

What is Wingstop trying to do now?

As the dominant force in the fast-casual wing game, Wingstop knows its audience better than most. For one, no one eats in a Wingstop. During three separate visits, not a single person (except for me) ever took their wings and sat and enjoyed them in the Wingstop space. Employees don’t bother to ask whether you're going to take the food to go, or eat it there. Everything is handed to you in a big-ass brown paper bag. But that speaks to what they're doing right.

Rather than spend extra money trying to attract the roaming millennial Wi-Fi hoarders, they've doubled down on technology that'll get you in and out efficiently AF, like their "Wingbot", which you can use over Facebook Messenger, Twitter, text, or Alexa to order wings.

They do subtle ad campaigns, like sponsoring gamers to eat wings on Twitch while playing video games. And they tapped comedian Anthony Anderson to star in a spoof of Jerry Seinfeld's "Comedians in Cars Getting Coffee" called "Carpooling with Cool People Eating Wings." Anderson picks up folks like, say, Real Housewives Dallas's Stephanie Hollman and implores them to eat wings while they drive around in an American sports car and quickly run out of things to talk about.

How I Did It:
Over the course of three unannounced visits to two Northern California Wingstop locations, I tried every flavor of wing, tender, fries, and sides. I did not try the brownie, though, and frankly, I feel fine about that.

The Good:
Before I get into the specifics here, a general note: In almost every instance, the dry rub flavors were far superior to the wet sauces on the wings, but the wet sauces shone brightly on the tenders. Most of this has to do with the fact that the heavily breaded tenders are just able to absorb more sauce and stay crunchy, whereas the wing in the wet sauces tends to get soggy and soft. This was especially true for the "flats" (see below).

With that said, the dry Lemon Pepper wings were by far the best. The combination of the bite of the black pepper and the acid from the lemon with the fatty crunch and saltiness of the fried chicken wing created some sort of victual alchemy in my mouth.

Not far behind was the dry Garlic Parmesan. Before I tried these, I had little interest in eating a wing that tastes like an Olive Garden appetizer, but my, how wrong I was. This combination dramatically improves when it jumps off bread as the bite and pungency of the garlic and the nutty, fatty Parmesan flavors are elevated by the satisfying crunch of the wing. If you’re opting for chicken tenders, the best flavor is Atomic.

The wet sauces hold up better on the chicken tenders. | Cole Saladino/Thrillist

As you'll see, the Wingstop traditional Buffalo sauce did little for me, but the Atomic Buffalo sauce was an entirely different story. Atomic sounds troubling (not the least because of the historical connotations) but it was actually just sort of in the "hot" category. There was no running to the fridge for milk, or not being able to touch my skin, or any of the other warnings you might get with stunt heat chicken.

For whatever reason, with the extra heat, the Buffalo flavor gets augmented, and the chicken tenders, with their thick crust, are better able to handle the sauce and remain crunchy. Dipped in either their blue cheese or ranch (as a Texan/New Englander hybrid who has spent a lot of time in Chicago and California, I am the Switzerland of wing dipping sauces), both do a great job dousing the heat in cooling fat and tang.

Now before I get to the sides, please pause for...

A Drums vs. Flats Interlude: A Brief, Measured Opinion
Drumsticks are so far superior to "flats.” First of all, they have a natural handle. Second, the bulb shape maximizes the amount of chicken per bite, and you aren't stuck trying to push a measly amount of chicken out between two bones. Third, drumsticks skin tends to cook more evenly and in a more crisp manner. I would never generalize about people by their wing preference, but folks who prefer "flats" are the same types of people who pick Luigi in Mario Kart.

The Best Sides:
This is where Wingstop truly elevated their game. Almost every side I tried was good to excellent. The flavored fries, which are hand cut at Wingstop locations, are a revelation when ordered "extra well." The best flavoring was the Parmesan, though honestly, both Lemon Pepper and Cajun were also good. In fact, the fries actually proved to be a better vehicle than the wings for dipping sauces. Did I think I would spend a day dipping Lemon Pepper fries in honey mustard in a public park as bees troublingly amassed around me? No, I did not. But the fries were just the beginning.

Winsgtop makes sure you eat your veggies with their Cajun Fried Corn. | Cole Saladino/Thrillist

I certainly didn't think the Fresh Baked Rolls would be anything but a side note. I got one just to check the box, only to find that it was drizzled in butter and had a crunchy exterior and a pillowy warm interior. Now we're not talking Tartine-quality baked goods here, but the execution and simplicity were excellent.

A true legend in the group was the Cajun Fried Corn. Each order is essentially one cob of corn, cut into four slices, each of which has been seasoned  with their cajun seasoning and fried. It's spicy and satisfying and salty. But it also kind of feels healthy, as if your brain is still like "Oh, this is a vegetable. Well done."

Get saucy with your choice of ranch, bleu cheese or honey mustard. | Cole Saladino/Thrillist

The Not-So-Good:
Honestly, Wingstop didn't have a ton of slip-ups. As you can see from above, the worst flavors were the Mango Habanero, which didn't have nearly enough spice to counter for the cloying sweetness, and the Hawaiian, which lacked any of the redeeming spice, but fell into the same camp.

Though better than those, the traditional Buffalo was perhaps the most disappointing. A bright, nearly pastel orange, the ratios of butter to vinegar to spice seemed off, and in each visit, the wings, especially the flats, tended to be more soggy and underwhelming. In the spectrum, they were *fine*, but for a place called Wingstop, I think nailing the original Buffalo wing sauce likely should be a priority.

From a sides perspective, the smothered fry options like Louisiana Voodoo (ranch, cheese sauce, cajun seasoning on fries) and Buffalo Ranch (buffalo sauce... plus ranch) ended up too soggy to really be satisfying, even when cooked extra well. And the cheese sauce lacked the tang and bite I was looking for, but these are honestly nitpicks. Wingstop's side game is on point.

But Wingstop exceeded all my expectations. They've managed to walk a business tightrope and focus in on a food subgroup that ordinarily gets mere lip service. And they do it in a hyper-efficient way that seems to know exactly what its audience wants: a variety of flavors served to you on the vehicle of your choice (wings, tenders, fries... corn!) quickly and with little fuss.

So while the other fast casual chains smash chairs over each others’ backs in a plant protein wrestling match for millennial attention, Wingstop will be over in the corner of your local strip mall, quietly waiting to hand you a dozen dry lemon pepper wings with parmesan fries and cajun corn, whenever you're ready.