Restaurant Customers Who Deserve a Table in Hell 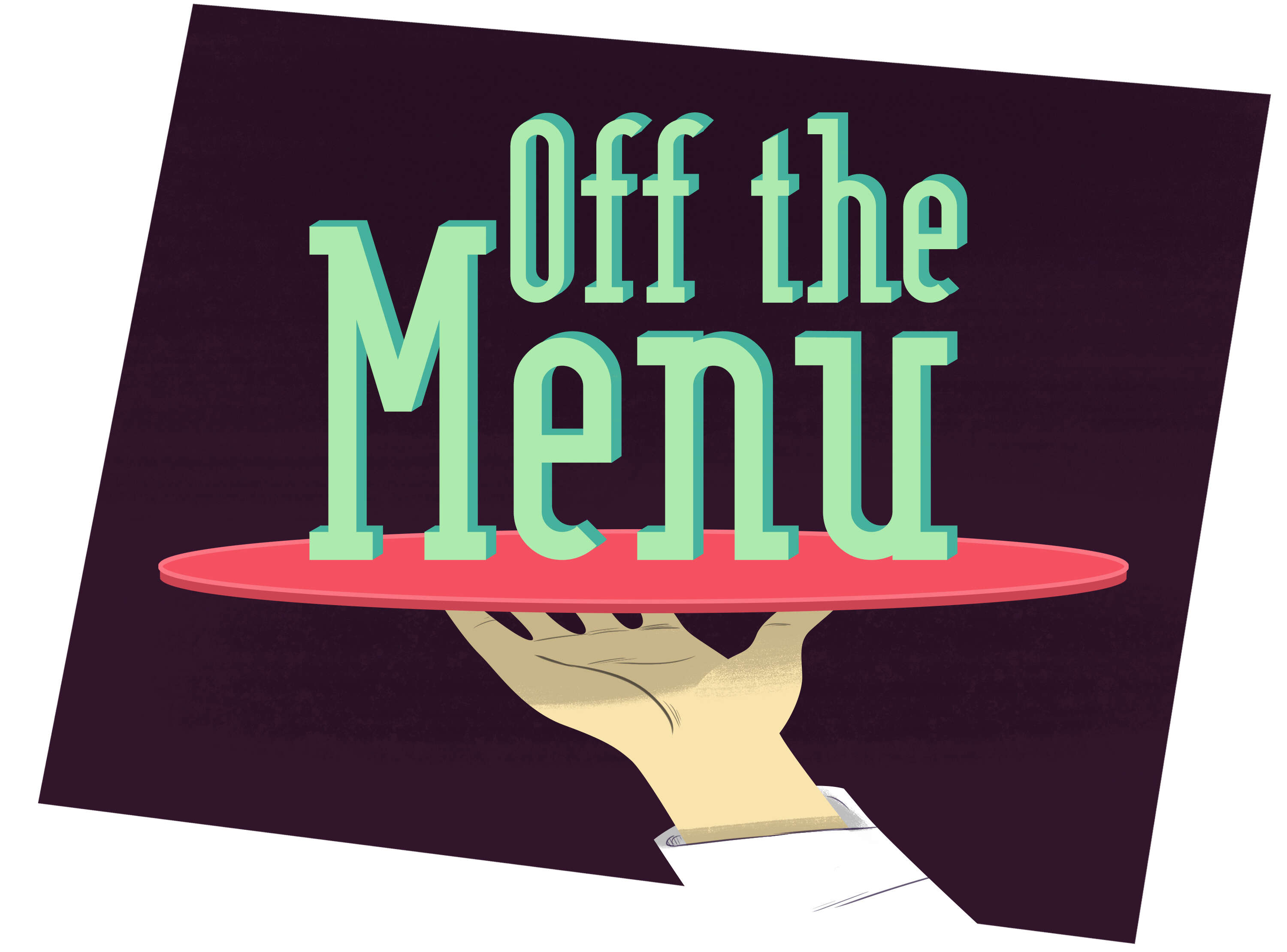 Welcome back to Off the Menu, where we bring you the best and strangest food stories from my email inbox. This week, we have our old standby: horrible, horrible customers. As always, these are real emails from real readers, though names have been changed.

"I work as a bartender in a neighborhood bar in DC with really good food. One weekend there was a massive snowstorm that conquered the streets. It did not conquer our bar though, and we were open the whole time -- 'til 2am every night. We even opened for brunch Saturday and Sunday.

"These girls walked in and asked for a table for four. We were already pretty busy by this point, so it would take some shifting. The waitress downstairs told them that if they could hang for like 10 minutes, a group was about to leave and she would rearrange some tables for them.

"They agreed and came upstairs to occupy four seats at my bar. The lead girl started talking to her friends about bottomless mimosas and chicken & waffles from our brunch menu. I let them know that because our main kitchen staff lived a ways away and there was no public transportation, there was no brunch menu -- and because there were no liquor deliveries Saturday morning, management said no bottomless that day. I could serve mimosas, but at normal price.

"They were immediately huffy. The lead girl said they had a brunch menu downstairs. I called her bluff and said it wasn't out that day. I helped open, so I know they didn't put out brunch menus. She relented and sayid she'd had it before and knew it existed. These are different concepts: 'out' vs 'exists.'

"Then she asked, 'Well, like, can't we get brunch anywhere?' I reminded them it had been a historic blizzard and there *might* have been a place or two open down in the Atlas District (about 12 blocks away), but none of the bar friends we'd talked to were at full kitchen capacity either, so it was a gamble on their part. She complained again that she just wanted bottomless mimosas and chicken & waffles, but they'd settle. They ordered three mimosas.

"After I put the three mimosas down they wanted to leave. At that point, the waitress came up to tell them their table was ready, but they were upset and said they were leaving. And they refused to pay for the mimosas. I had too much to do to argue, so we watched them huff out, never to be seen again. Hopefully one slipped in a snow embankment and got a brunch of snow." -- Nate Canalotto

"I'd been working in the same downtown pub for five years (great little hole-in-the-wall... so fun, but super-dodgy sometimes) and had somehow managed to be the only server there who'd never been assaulted. Never shoved, bitten, spit on, hit, etc. Like I said, dodgy.

"We'd get a lot of good ol' boys (read: crotchety old assholes who think it's super-cool to be leering, gross misogynists older than my father) and one of them was a million years old, tiny, and frail. On this occasion, he wanted to pay for his pint with a credit card but didn't want to get up, so I ran it through and brought back the slip for a signature.

"Twenty minutes later, he called me over and told me that I'd stolen his Visa. Of course assuming he'd checked his wallet, I panicked for a second and checked my apron and the machine to see if it was there, but no luck. When I went back over to tell him I couldn't find it, his wallet was open on the table with the Visa peeking out. I pointed it out to him and he started yelling at me that it wasn't there.

"I had other shit to do so I tried to walk away, but he grabbed my arm so hard I yelped (left a MASSIVE bruise) and kept screaming at me about my thievery. Long story short, I finally got away from him and he called the cops on me. They showed up (I was still on shift and everything), I told them the Visa was visible in his wallet, which they verified and kind of scolded him about. He threw his pint on the floor and left. I never saw him again." -- Regina McAllister

"A few years ago I was out to lunch with a number of co-workers at this local sandwich shop in the bitter white north. Not a hugely extensive menu, just a handful of sandwiches and salads with bags of brand chips as a side option. We didn't have a waiter/waitress -- just a food runner in charge of bringing our order out, and maybe refills if they were feeling extra helpful.

"Now, one of my co-workers was… tough to get along with. He was friendly, but in the way that he thought he was the edgy guy with the crass sense of humor. He also had a short fuse and was a loud man. In fact, he could have easily served as the understudy for Farva from Super Troopers. Another thing to note is that he was particularly short with those in the service industry... unless his server was an attractive woman. So, in summation, he was scum.

"He ordered a grilled chicken sandwich and sat down with the rest of us to wait for the food to come out. After a few minutes our server set our plates in front of us, did the usual "anything else?" speech, and left. It was only after that Farva realized his sandwich consisted of lettuce, tomato, honey mustard, onion, and bread. No chicken.

"To be fair, that's a significant oversight, especially considering we were the only ones in the restaurant, but it was lunch. We were in no hurry, there was more food available, we'd all be OK. Everybody remain calm. But calm was not to be remained that day. Farva was seething.

[Editor’s Note: OK, yes, this is a pretty large -- albeit hilarious -- mistake. This does not make Farva less of an asshole for what happens next.]

"As soon as the runner came into view, he snapped his fingers to get her attention. She sweetly approached the table from behind his seat and asked if everything tasted OK. No, ma'am. Farva did not turn around, but instead hoisted the open sandwich over his head a few inches from her face and said, 'Where's the fuckin' chicken?'

"Our server laughed (nervously, or because it was kind of a funny mistake) and offered to remake it. Not without a few lines of lecture from our dear friend about what was supposed to go on a chicken sandwich. Namely, chicken.

"This next part made the server the real hero of the story when she came back and, sweet as ever, apologized to Farva and said that there were no more chicken fillets, and if there was anything else she could get for him. In my imaginary scenario the kitchen had loads of thawed to frozen fillets, and it was only Farva's behavior that earned him a little white lie. He was piiiisssssssed, and ultimately decided he wasn't ordering anything, so he went hungry.

"We heard a lot of bitching the rest of the day about how shitty that place was and how we should never go back there, and that it was probably going to go out of business soon. If you ask me, the chicken sandwich was pretty bangin', and eating it in front of him that afternoon with (presumably) the last chicken fillet, was enough to make me a repeat customer." -- Casey Hollister[Editor’s Note: Farva’s just unhappy the meal wasn’t at Shenanigans.]

"Back in the late '90s, I worked at an Italian fast-food restaurant that was known for free breadsticks. I always dreaded being scheduled for Sunday afternoons because the post-church lunch rush always brought in huge, loud, messy family groups.

"This particular Sunday I was stationed at the cash registers. The rush had started to die down and most of the families were sitting and eating. I saw this elderly guy walking up with a fistful of forks and knives. A co-worker who was running food orders leaned over to me and said, 'Oh man, get ready. This guy is gonna complain about the plasticware,' and walked away. I really had no idea what to expect and wondered what he was going to say.

"'Well you need to use white forks. We need to keep the (REDACTED RACIAL SLUR) down.'

"'You should use white forks. We don't want to give the (REDACTED SAME RACIAL SLUR) too much.'

"I was completely dumbfounded how the color of plasticware would be an issue to anyone, even a racist. I had no clue what to say. I told the guy, 'OK, I'll let the manager know.' That seemed to satisfy him and he walked away.

"A couple of months later on another Sunday rush, I'm running food orders and I see Mr. 'Whites Only' Guy walking up with a fistful of forks and knives. I lean over to a new-ish co-worker on the register and tell her, 'This guy is gonna complain about the plasticware,' and walk away.

"Apparently, he would do this every couple of months." [Editor’s Note: Customers like this became less amusing and more abjectly horrifying starting about two months ago. I can't think why.] -- Ken Carlyle

"I work in what is best described as a hipster diner in Detroit. My shift is 9pm to 4am on the weekends. We only seat 12, so it's mostly people ordering to-go on the way home from the bar.

"We have one 'customer' named Clarence. Clarence is a public masturbator. I could not go a week without seeing him jacking off somewhere. Behind the dumpsters. Across the street. IN THE BUSHES BY MY CAR. Cops? No help. I think they thought I was exaggerating -- or maybe they just didn't want to deal with it, I don’t know.

"The weekend of Detroit's Big Stupid Electronic Music and Drug Festival, we were predictably slammed around 2:30am. Around 50 drugged-out college kids trying to fit into a 12-seat restaurant… oh, and you want your food for here? Total nightmare. This is when Clarence pushes his way in and starts… you know. All the customers are too dazed to realize what's happening, and I don't want to alert them, because if anyone fell trying to get out, they could get seriously hurt. I keep trying to sneak away to call the cops without making a scene, but this girl is screaming her order at me and Clarence keeps edging closer and closer to her. Finally, I just scream, 'YOU NEED TO GET THE HELL OUT OF HERE BEFORE I CALL THE COPS.'"

"Clarence runs out and somehow the crowd is still oblivious… except the girl he was creeping on who thinks I'm gonna call the cops on HER... she later wrote a now-removed Yelp review stating so and calling me a dumb c***." -- Katie Simmons

Do you have a restaurant, home-cooking, or any other food-adjacent story you’d like to see appear in Off the Menu (on ANY subject, not just this one)? Please email WilyUbertrout@gmail.com with "Off the Menu" in the subject line (or you can find me on Twitter @EyePatchGuy). Submissions are always welcome!