Grab a Slice at One of These New Orleans Pizza Shops

By Missy Wilkinson, and Carrie Murphy 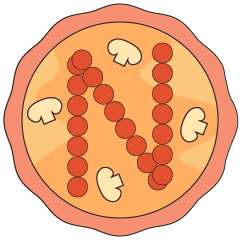 New Orleans isn’t really known for its pizza. Though, you’d think with all the alcohol consumption in the city, that booze-soaking pies would be more prevalent in the Big Easy. That being said, it is known for its food, and a city that invented an entirely new cuisine (Creole, cher) can definitely sling a ball of pizza dough or two. But whatever you do, don’t eat the pizza at Bourbon Street daiquiri shops. Try any of these places instead.

Est. 2011 | Freret
Upscale Italian spot with Neapolitan personal-sized pizzas
Considering Naples is the birthplace of pizza, the most “authentic” pizza you’ll find in New Orleans is at Ancora. It’s Neapolitan to the core, down to the wood-burning oven, the crust recipe (only flour, water, and salt), and the southern Italian wine list. All of the ingredients local or directly imported from Naples. Pizzas are small -- think “personal pan pizza” -- and feature limited toppings. Also known for its salumi (Italian cold cuts made from pork), Ancora has a well-curated menu of non-pizza options, including gnocchi, salads, and meatballs.

Est. 2015 | Mid City and Uptown
Thin-crust pies and po’boys with an outdoor deck
An amiable neighborhood pizza joint, Mid City Pizza is a stable stop for a solid slice or a hefty calzone, served up with a cold beer. The margherita is particularly tasty, but locals love the specials, especially the red beans and rice pizza or taco pizza. If you’re  dairy-averse, there is vegan cheese, but unfortunately, you’ll find no gluten-free options for the wheat-intolerant in your party. Hit up the original location in (you guessed it!) Mid City to hang on the cute deck, people watch along tree-lined Banks Street, and enjoy the murals painted on the building.

Est. 2019 | Central Business District
Roman outpost where pizza is cut with scissors and sold by weight
New to the scene, this Roman-style pizzeria is one of only three locations in the world  -- and two in the US (the flagship is in Rome, natch). You’ve probably never had pizza done this way before -- a dizzying array of choices and flavors, and employees cut you off a portion with scissors (yep, scissors). Portions are by the pound and kind of tapas-style, so you can try a few varieties. There’s a muffaletta variety, of course, but we especially dig the potato mozzarella and meatball.

Est. 2012 | Bywater
The best Big Apple-style pies you'll find in the Big Easy
You wouldn’t set yourself up for failure by putting the word “delicious” in your restaurant name unless you were really, really confident. And Pizza Delicious’s massive, foldable slices deliver on the implicit promise in the pizzeria’s name. Get classic or vegan pizza by the slice or whole pie at this casual counter-serve joint in Bywater and wash it down with a pitcher of PBR.

Est. 2015 | Marigny
Fancy California-style pies in an industrial-chic warehouse
People of the crust-punk persuasion and their ilk are still pissed that a fancy pizza restaurant opened in this warehouse, which formerly housed a community bike shop and anarchist book collective. (“New Orleans is over,” sniffed a friend upon learning a neighboring squat was being converted into pricey lofts.) There’s not much of the collective to recognize in Paladar 511’s high wood-plank ceilings, crystal chandeliers and lath-wrapped counters, but these elements do make an appropriately bougie backdrop for New Orleans’ fanciest pizza: thin-crusted, dinner plate-sized, California-style pies, including one with house-made lamb sausage and pine nuts.

Est. 2014 | Central Business District
Caviar-caliber pies at anchovy prices in a sleek hotel space
Yes, this James Beard Award-winning restaurant is upscale, but its legendary happy hour boasts some of the cheapest (and most delicious) eats in New Orleans. The restaurant’s wood oven-fired gourmet pies all are half price from 3-5pm daily, as are well drinks and select beers and wines. Just don’t slip up and order sparkling water when the preternaturally attractive server offers that option -- it’s expensive! Take note: Pizza Domenica is the more casual Uptown sibling of the CBD original.

Est. 2006 | French Quarter
Cheesy, greasy slices to satisfy late-night munchies
You know that saying about how there’s no such thing as bad sex or bad pizza? Well, file Vieux Carre Pizza in the same inadvisable-but-irresistible category as that one-night stand you met at Snake and Jake’s. You can grab pizza by the slice or whole pie until 4:30am on weekends (3am weekdays) at this casual French Quarter spot. Basic toppings range from pepperoni to chicken pesto, and the crust is Pizza Hut-thick. But you could do far worse when it comes to drunk food.

Est. 2004 | Garden District
Homegrown pizza joint with dim lighting and cozy booth seating
When Slice opened, New Orleans’ pizza scene was limited, to say the least. Slice was one of the first local purveyors to sell pizza by -- yep -- the slice. It’s since been eclipsed by the newer, flashier pizza joints on this list, but with hand-tossed crusts, cayenne-laced tomato sauce, and Wisconsin mozzarella cheese, Slice pizzas can still give any artisanal pies a run for their money.

Est. 1980 | Uptown
Dive bar with greasy, thin-crust pizza and cheap prices
Yes, there’s a corny miniature Statue of Liberty outside. Yes, there may be gruesome and disturbing nature documentaries being shown on the flat-screen TV. But New York Pizza turns out a pretty decent pie and has a cult following, thanks in part to the fact the $5 gets you both a slice and a pint of beer. Dinner doesn’t get better than that.

Carrie Murphy is a freelance writer, doula, and poet currently residing in New Orleans. Her work has appeared in or on ELLE, Women’s Health, Glamour, Apartment Therapy, and other websites and publications. Follow her on Twitter.
Missy Wilkinson is sick of hearing transplants bitch about NOLA’s pizza. SHUT UP AND EAT YOUR PIZZA OR SHE’LL EAT IT FOR YOU. Follow her on Instagram @nowlistenmissy