The Best Lobster Rolls in the Northeast

It’s not summer in the Northeast until you’ve had a lobster roll and a cold beer on a dock in some quaint harbor (possibly with “Summertime” by DJ Jazzy Jeff and The Fresh Prince playing softly in the background). So to help you live your best summer, we’ve compiled a list of some of the most outstanding lobster rolls in the region, from NYC to Maine -- where lobster basically defines the cuisine (more on that here). Whether you’re a devotee of the warm, butter-doused, Connecticut-style roll or the cold, mayo-dressed, Maine-style roll, you’ll find the very best below. 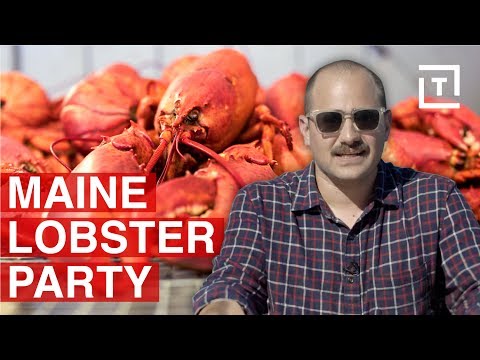 Conveniently situated right off the bridge between Kennebunk and Kennebunkport, the Clam Shack (featured in the video above) has become a waypoint for many traveling up the Maine Coast. It’s a simple takeout window and picnic table setup, perfect for lunch on the road, and though the clams (steamed or fried) are great, the lobster roll can’t be missed. It’s a unique sandwich, with the fresh-picked meat of a 1-pound lobster served on a homemade hamburger bun instead of a roll, and you can order it with mayo or butter or both.

From the exterior alone, you can tell Lobster Landing serves a great lobster roll. It’s a battered little shack perched out over the Long Island Sound, with a wooden deck full of plastic tables and chairs, and the menu offers just three things: sausage grinders, hot dogs, and lobster rolls. The latter is one of the best in the state, served on a grinder roll (aka a sub, so far bigger than your average roll), piled with fresh-caught, fresh-picked lobster, spritzed with lemon, and generously doused with melted butter.

The rather upscale lobster roll (typically hovering around $30) at this elegant and hugely popular North End oyster bar is a Boston legend. It’s served one of two ways, either cold with mayo or hot with butter, but most people agree the latter is the way to go. This a monster of a roll -- a soft brioche bun overflowing with big chunks of lobster -- and it arrives with a big pile of perfectly golden fries -- so, in other words, don’t be put off by the price.

This bright, modern, all-day oyster bar doesn’t serve your typical Maine lobster roll. For starters, the chunks of lobster meat are tossed in brown butter rather than the standard mayo, which helps add depth and brings out the sweetness. And instead of a regular roll, Eventide uses a small, squishy Chinese steamed bun (which is a little on the dainty side, but still arrives well-stuffed).

Many consider the lobster roll at this roadside seafood shack to be the best in Cape Cod, thanks to the fresh lobster salad, which is generously loaded with enormous claw pieces and lightly dressed with mayo before being piled into a lettuce-lined bun. The roll comes with a side of fries, but if you want a beer to round out your meal, make sure you bring your own (the place place is BYOB).

Red’s Eats has a reputation for being a bit of a tourist trap, but it’s one of those great institutions where the perpetual long line is totally justified. If you go in the summer, you’ll have to wait, but you’re also guaranteed not to regret it once you have your hands on one of the buttery rolls stuffed with more meat than you’d get in a single lobster. These rolls are as simple as it gets: enormous chunks of ultra-fresh lobster served with a cup of either mayo or melted butter on the side. Though it’s a Maine joint, Connecticut-style is actually the way to go here, since it’s easier to just douse the whole thing with butter than to try to slather on mayo.

This industrial-looking waterfront seafood spot has both fantastic views of the Boston skyline (plus the planes taking off from Logan Airport) and an Anthony Bourdain-approved lobster roll. It’s a fat, Maine-style roll (i.e., mayo-dressed) packed with so much meat you can hardly see the bun, and it’s completely worth the trek from downtown Boston, especially if you can grab a picnic table outside.

Technically the specialty at Bob’s is fried clams, but that doesn’t mean the lobster roll should be overlooked. The Maine-style roll here is long and lean but generously stuffed (you can also order a jumbo size!), and made only with claw and knuckle meat, which is more tender and sweet than the tail. Throw in an order of those golden fried clams on the side, and you’ve got the perfect Maine meal.

This New England-style seafood spot is a longtime neighborhood favorite in the West Village, and the lobster roll is undoubtedly its best dish. It’s a Maine-style roll, featuring a heaping pile of lobster generously dressed with mayo and a little chopped celery inside a buttered roll that’s so full you can barely pick it up. At around $30, it tends to be a little pricier than some of the more casual lobster spots in the city, but for the charming bistro vibe and the enormous pile of shoestring fries you get on the side, it’s worth it.

At this stylish, sustainable seafood market that doubles as a tiny restaurant, the lobster roll is a refined but straightforward version of the Maine classic. It comes lightly dressed in mayo, with a little chopped celery, fresh tarragon, and lemon to dress it up, plus citrus slaw, house-made pickles, and thick-cut fries on the side.

This sprawling seafood restaurant, which dates back to the 1940s, overlooks the harbor where Rhode Island’s largest fishing fleet brings in its daily catch. That includes the sweet, fresh lobsters that end up in the lobster roll, a mayo-dressed sandwich so full of meat that it’s served with a knife and fork.

Abbott’s Lobster in the Rough

This 70-year-old seafood spot has plenty of outdoor seating overlooking the ocean, and a whole lineup of lobster rolls ranging in size from standard and satisfying to big enough to feed a family. You can get yours either Maine-style or Connecticut-style, but given the location, you’ll want to opt for the latter. The regular-size roll gives you a quarter pound of meat (which more than a small lobster) on a hamburger bun, but you can also upgrade to the OMG roll, which has a half pound of meat, or, if if you’re ravenous, the LOL roll (that stands for “lots of lobster,” obviously), which includes a full, towering pound of lobster.

Red Hook Lobster Pound gets bonus points for serving the biggest variety of lobster rolls out of any place on this list. Besides Connecticut-style and Maine-style rolls, it also offers “Tuscan-style” rolls, dressed with a lemon basil vinaigrette, and a BLT version. But what really makes it stand out, no matter what roll you order, is the attention to detail. The lobster is fresh from Maine, the mayo is homemade, and the sprinkle of paprika and scallions on top add just the right punch of flavor.

This enormously popular chain, which started in 2009 with a tiny, eight-seat spot in East Village, now has locations all over Manhattan and Brooklyn, not to mention other locations all over the country, from Miami to Vegas. That’s a testament to the greatness of this lobster roll, which uses a generous quarter-pound of fresh, sustainably sourced lobster meat dressed in both butter and mayo. At $17 for a roll, it’s also one of the more affordable options in the city.

Marguerite Preston is a writer and editor based in Brooklyn. She drives past Red’s Eats every summer, but has only convinced her family to wait in line once.