After shuttering the original East Village location due to COVID-19, their legendary menu returns.

For Maribel Araujo, the arepa was always more than a cornerstone of her native cuisine–it was the gateway to creating a community.

“Venezuelans eat arepas for breakfast, lunch, dinner, and at after parties,” explains Araujo, who opened the original Caracas Arepa Bar in the East Village in 2003 with her partner (and then husband) Aristides Barrios, whom she praises for being the counterbalance of pragmatism to her more impassioned approach. The seed for Caracas was planted when Araujo—who had arrived in NYC in 2001 initially intending to work in film production—happened to stop into a juice bar and witnessed the friendly interactions between neighborhood regulars. 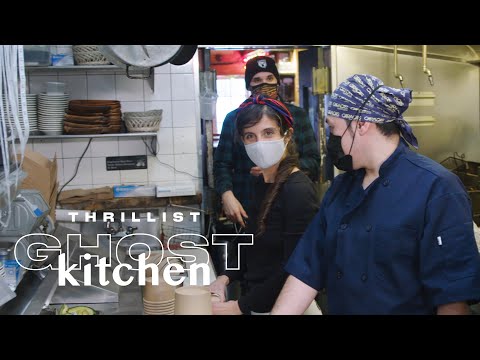 She realized this was what she was searching for—to have a place just like the bakeries and shops she had frequented with her mother while growing up in Venezuela, where people knew each other by name and there was a true sense of community and closeness. So, she asked herself, what better way to create a circle of her own in her adopted homeland of America, than with the versatile arepa? Made with milled corn, salt, water, and oil, it was both familiar as a staple and adaptable all at once—with fillings for every taste from meat to veggies.

For Araujo, who is vegan, the ultimate driver in creating these neighborhood havens was simply having a space to share—whether it was for a moment, an experience, or a good time. Thus, creating balance in the menu was very important, with options for vegans, vegetarians, and meat-eaters alike to satisfy every type of taste. “We always wanted to create a place that was absolutely inclusive for everyone,” she says.

It is this New York community which she has cultivated and served for nearly two decades—through fire, flood, and even a global pandemic—that has thrived and endured. “It’s a combination of my own DNA, where I come from, and my ancestors,” says Araujo. “I’ve always been very community oriented, wanting to protect others and help them in any way I can—so it became apparent that’s what I would be focusing on in my life.”

Success for the first tiny East Village location soon meant expansion into a larger storefront in 2006 (two doors down from the original), where the beloved arepas and empanadas gave way to a larger menu including desserts and mains. Araujo and Barrios then headed south to Williamsburg, opening Roneria Caracas in 2009, a specialty rum bar featuring craft cocktails, which they housed within the larger Brooklyn Caracas restaurant. Then in 2011, Araujo expanded into Queens—opening a seasonal summertime outpost, Rockaway Caracas, to offer beachgoers a taste of the much sought after savory corn cakes which soon became a favorite in yet another borough.

But expansion didn’t come without setbacks. Caracas has been through a number of disasters that might have sunk any other restaurant empire that didn’t embody Araujo’s family-taught resilience. Hurricane Sandy destroyed her beachside arepa outpost in 2012, and a fire badly damaged her East Village restaurant in 2016, inspiring her to innovate the space with a takeaway window. So when an unprecedented global pandemic hit in March of 2020, Araujo was all too familiar with disaster-induced pivots. With practically no assistance from the institutions who should have bolstered small business owners and unwavering community pillars like herself, Caracas soldiered on.

But endurance has been an ally of Araujo’s since her days training as a flamenco dancer, and it has helped her persevere even in times of loss. After more than 17 years, the original East Village location of Caracas closed its doors in November of 2020, a casualty of the destruction unleashed by COVID-19. “After doing this for so many years and trying to be a very responsible operator and taking care of our staff with the love and passion that we do, it was inevitable. We tried everything that we could, but COVID-19 definitely pushed us over, and it was irresponsible of us not to make that decision at the time we made it,” says Arajuo.

And even more recently, after a decade of serving the Rockaway Beach community, she rallied with fellow New Yorkers after yet another setback two weeks ago—the rejection by the city to extend the Rockaway Beach Club contract (a trio of food operators of which Caracas is a longtime member).

“We showed our discontent publicly at the hearing that took place. Now we’re waiting to see if there’s any reconsideration, based on the number of New Yorkers and Rockaway residents who showed up in support of not removing the people who have been there for 10 years, through two hurricanes and a massive amount of restoration and renovation,” says Araujo.

She points out there are no complaints of record against any of the operators. Rather, they are well supported by the local community, valued as good partners who have made genuine efforts, be it for the environment (cutting out straws and plastic bottles) or rebuilding (post-hurricane). “The only thing that is against us is the money that was offered [by the other side] for the agreement to start in 2021.”

So once again, her community has shifted—now the Williamsburg spot is the sole location still open, where they were able to retain and bring over some of their staff. Sidewalk dining, delivery, and takeout are all available. But now, in partnership with Thrillist Ghost Kitchen—Caracas will once again return to Manhattan during its two-week residency. And now, with expanded delivery from downtown Manhattan to 96th Street—from January 27 - February 5, Caracas will be available for the first time ever to Uptown fans. They’ve also prepared a special lineup of arepas, famous housemade sauce (for which plans are in the works to launch nationwide), and their popular take on the michelada, the Mexican beer cocktail. A fun addition to the package is the inclusion of a custom Caracas playlist, because as Araujo says, “Let’s just pretend that we are at the restaurant.”

For Araujo and her dedicated team of nearly 20 years, after initially closing their doors last March due to the lockdown because of COVID-19, the most precious aspect of operating a small business—interaction—was removed. But since reopening, she reflects that the continued support from her community and regular patrons helps inspire her daily, with their generosity and kindness shining through from behind their face coverings. “They give me hope that we can be creative and find ways that might even be more sustainable in the long run in the hospitality industry. And our partnership with Thrillist Ghost Kitchen is more proof of that."