25 crazy dishes you can order in New York City

The best part about the sustainability movement is that it's brought the "every part of the buffalo" philosophy to the forefront of dining, allowing you to do your part to save the planet by feasting on random parts. We rounded up 25 kinda nuts New York City dishes whose main ingredients have made the journey from afterthought to entree. Eat the hell out of them, and tell us your favorite bizarre dishes in the comments -- hopefully one of them will actually involve buffalo.

After separating the tongue to be brined for a week, chef Michael Toscano roasts the head for eight hours. Then things get bat****: the cheeks are served simply, but the jaw meat is made into patties and grilled, and the brain is trotted out as a spread with mascarpone, olive oil, and champagne vinegar.

James Beard winner Jamie Bissonnette has three double consonants in his last name. He's also just released The New Charcuterie Cookbook for aspiring whole-animal cooks, though you'd have to be pretty advanced to have a cauldron in your kitchen with which to boil pig's heads before pinching off the meat and deep frying them into golden brown sticks.

Growing up in Boston, chef Doron Wong's food focus wasn't exactly targeted at fish heads, but after traveling extensively in Asia he returned with a broadened perspective that's been pushed even further at this restaurant specializing in the cuisine of a southwestern province of China overflowing with influences from Vietnam, Burma (Myanmar... or is Burma supposed to be in parenthesis?), Tibet, and Laos.

Recent "best brisket in NYC" winner Will Horowitz loves working with farmers to use the parts they have a hard time selling -- partly because it sets up a more sustainable food system, and partly because those parts are freaking delicious. "It just so happens that the neck is one of the best parts of any animal; the muscle is well worked and packed with flavor," says Horowitz. His neck is marinaded 48 hrs, smoked for 10, and braised for another five. "The fat cap on top just slowly melts into the meat, by the time we bring it to the table each mouth watering bite becomes a euphoric experience." Take that, rave culture.

The original version of Sean Telo's menu special involved goat heart, charred eggplant, and squid ink, but here he's changed it up to a calf variety with charred eggplant, quail yolks, bottarga & chervil, who you probably remember from a Three Musketeers novel or something.

Cured and brined for 24hrs and then braised in a lemon broth, rolled in pig skin and seared golden brown, this head is David Standridge's favorite part of Market Table's Stony Brook Farms-sourced Berkshire Whole Hog Program. (Note: the head has been sliced. This is not what heads look like when still on hogs.)

Chicken and turkey stand no chance against this new potpie of veal neck and sweetbreads, sided by a cold-braised tongue served on a potato pancake. If Bender from The Breakfast Club's dad had tried one of these maybe he wouldn't have been such a jerk.

It's served with wax beans, but you won't be waxing about beans when you're eating LAMB HEART PASTRAMI.

We're kind of jerks for ruining the surprise here, but that chicken foot is not actually listed on the menu -- it just shows up with your fried chicken, causing you to exclaim "WT Fried Chicken!?". For something less overtly insane, but still insane...

Egg in a Hole (also with special bonus) at Fedora

Besides the traditional egg and some tasty cheddar, this comfort classic also comes with a ragout of tripe. Just like your mom used to make, if your mom is chef Mehdi Brunet-Benkritly. (Note: Chef Mehdi is not your mom.)

This wonderfully simple preparation really highlights how far beef tongue has come from its days of exclusively living in your grandmother's refrigerator. The beet-pickling is the ultimate complement, since 15 years ago, young diners would have never considered eating beets either.

It's not just cow tongue anymore either. Using hyssop and pommes puree, Executive chef Shaun Hergatt has created an artistic masterpiece out of something you once only saw when a lamb was messing with you and knew you couldn't do anything about it.

You'll be delighted to know that shiokara are squid guts, served at Yopparai on the "rare taste" section of the menu. Significantly more substantial than you'd think, chef/co-owner Gaku Shibata says these bar snacks are best consumed with sake, which offsets both their brininess and your squeamishness.

Bruce and Eric Bromberg's basket of spare parts -- whose name kind of sounds like a genre of adult poultry videos -- includes crispy necks, backs, hearts & gizzards drizzled with hot sauce and sprinkled with pickled peppers. We probably had you at "crispy".

"Queso de puerco" is a traditional foodstuff in Mexican markets, so it's fitting that chef Alex Stupak slid them into the last slot in his menu's taco lineup with little fanfare (it just says "with refried lentils", as opposed to "we were sitting around thinking 'what could we put on a tortilla that would totally freak people out?' and then somebody said 'head cheese!" and we were like 'yeah!'").

The Cow Experience at Takashi

If you've tried everything else, go to Takashi. Their Cow Experience presents 16 cuts drawn from every single part of the cow, while their famed testigargots presents a single cut from a very, very tender part of a calf. The tenderest part, really. If that's not up your alley...

... then you're definitely a brain cream guy. It's made with blue cheese and butter, and you squeeze it out of this tube. Then when you get home and open your medicine cabinet you totally freak out because you think your toothpaste might also be brain cream, and pretty soon you start thinking "could it be brain cream?" every time you see a tube. That is the power of brain cream.

Chef Tibor Kogler's recipe calls for white wine, onion, carrots, celery, leeks, a sprig of thyme, a hint of chili, and the thrilling uncertainty of not knowing if you might actually be eating an anaconda's head. 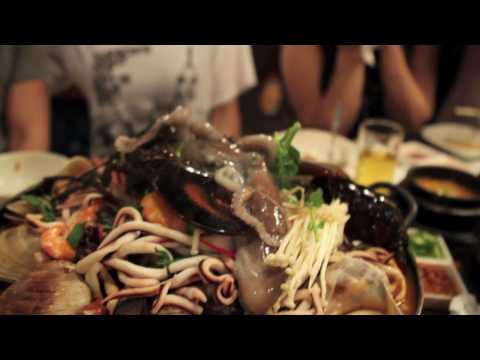