How I Transformed My Restaurant Into a Food Bank

What one chef/owner is doing to support NYC restaurant workers in the era of COVID-19.

If you said to me a month ago that my career as I’ve known it for the past 18 years was about to go up in smoke, I wouldn’t have believed you. I’ve been running my restaurant, Olmsted, for the past four years here in Prospect Heights along with my partner Max Katzenberg, and recently we opened the French-Japanese inspired Maison Yaki down the street. We’re lucky enough to have gotten a lot of positive press over the years, and things were generally going well.

Cut to a few weeks later, I’m forced to lay off my entire 60-person staff because of COVID-19. And now I’m using my restaurant space to operate a food bank, providing meals to furloughed restaurant workers. No one could have seen this coming, but here we are. 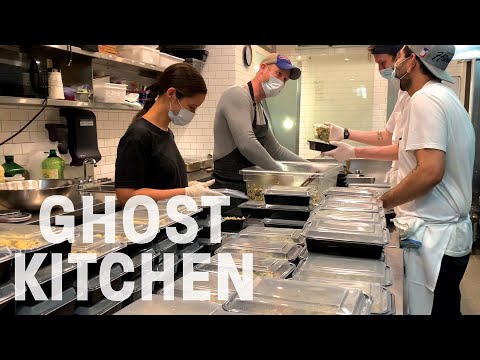 The changes started happening slowly. In early March, business started getting spotty. Winter is already a slow time of the year for restaurants in the city and then compounding that, we started losing 10-20 reservations per evening because of the intensifying situation with Coronavirus. You could feel it in the dining room -- people were anxious.

Then two weeks ago, De Blasio was telling all of us there might be a shelter-in-place mandate. Sales were down, so at Olmsted I came up with a whole new menu without having to order any more food, some cheaper tasting menus using what we already have on hand. That was when we were still allowed to have reduced capacity in-house. At Maison Yaki, we canceled the menu -- we figured we didn’t need to do fancy dishes right now so we’ll just do burgers and onion rings. And after no more than three days, we had to pivot again.

We went from operating as normal to pivoting to something else every 12 hours. After I write new menus, the situation changes again. So then we have to stop. Maison Yaki is going to takeout- and delivery-only and Olmsted we’re going to offer meal kits with some of our sauces and raw ingredients.

A lot of people might be thinking: “At least restaurants can still deliver, it will help them get through this period.” It’s just not the case. At Olmsted we would maybe make 10-20% of our revenue if we switched to just delivery. That means we can only retain 10-20% of our staff, not factoring in all of our bills. It’s a drop in the bucket.

But I thought to myself, if I can still employ some people I should. I don’t care about forgoing my own income right now. The problem is -- some of our longest and dedicated staff does not want to get on a train to come to work. I started reaching out to some of them and they’re avoiding some of the things I’m saying. They’re like: “I just live too far away.” I was putting them in a weird spot by asking them to work, even though I thought I was helping them. So we save a few people's jobs but we’re forcing them to get on a train for 45 minutes and put themselves in danger. So then I basically said: “Shut it all down, it's not worth it.” We have to reevaluate.

So, I was faced with the most gut-wrenching decision I’ve ever had to make: lay off my entire staff. If I could have used my own money, I would have to give them one more paycheck. I don’t have that. So we started a GoFundMe. We ended up getting $75K or so at this point which is amazing. But that’s only a week’s payroll. We have 60 employees between two small restaurants. Some of the big guys, the Danny Meyers of the world, have to put in a couple hundred thousand down to get a loan so they can finish out the rest of their $2Mil payroll. It’s nuts.

I'm lucky enough to have what I have. If I’m not going to use that platform to try and help people, then I don’t deserve it.

Realizing that this was not only affecting us but every single restaurant in the country, my partner Max and I decided to start a coalition to collectively unite all restaurants that were all sharing this tremendous financial burden.

Our first goal: Can we put enough pressure on the government to cancel sales tax for this month (due on March 20)? Governor Andrew Cuomo ended up forgoing interest and penalties on sales tax for the next 90 days. So that’s something.

We’re trying to use our network to reach as many people as we can. I'm lucky enough to have what I have. If I’m not going to use that platform to try and help people, then I don’t deserve it.

But I wanted to go a step further. So when I saw that Edouardo Jordan in Seattle had partnered with Ed Lee and the LEE Initiative in Louisville to start a food bank, I immediately called him and said “I want in.” Ed went to Maker’s Mark and brought them in as a sponsor. Since some of these big brands aren’t able to use all of their marketing budgets right now, they’re injecting some of these restaurants with some cash to get back open. So that’s how we’re funding our food bank which is open seven days a week.

Right now it’s really just me and Kathryn Stapleton, our Director of Operations, running it along with some volunteers. We’re cooking and packaging up meals for furloughed restaurant workers, and placing them in our vestibule for safe pick-up. We don’t want more than six people in the building because we want to keep it as safe as possible. I’m having to turn volunteers away because of that. The employees that are here all live within walking distance from the restaurant as well.

We’re feeding about 150 people a day, but this is only our fifth day. The truth is, we can do more, we can do double. So I want to make it work so we can almost feed 300 people a day.

Billy Durney from Hometown BBQ got involved with it just this week. He’s going to smoke two whole pigs a day for us and drop them off, and so we don't have to deal with the proteins anymore. We’re just going to make tons of sides, using the money that Makers gave us to buy produce from some great purveyors like Norwich Meadows Farms. Pain D’Avignon is making fresh bread for us. And we’re including other items like toilet paper, baby food, and toothbrushes in the kits as well.

The other day, Plant Love House, my favorite Thai spot, dropped off what was left of their walk-in. I’m worried about them. It’s all the guys that don’t get a ton of press that I worry about. They don’t even know what James Beard is or frankly care. That’s who we have to look out for. When this is all over, we’re only going to have 10 chefs and restaurateurs who are even able to reopen. We have to do what we can to protect everyone else and what we’re doing this week is only the beginning.

As told to Kelly Dobkin.

Greg Baxtrom is the chef/owner of Olmsted and Maison Yaki in Brooklyn.