Sylvia’s continues to feed, love, and nourish their community.

There’s an unspoken family rule among the relatives who operate Sylvia’s together: the iconic marquee of their landmark Harlem restaurant must stay lit as a declaration of business as usual. Their matriarch, Sylvia Woods, the restaurant’s founder and culinary legend, had always made sure of this when she was still alive—and four generations of her descendants continue the legacy today in 2020. “My grandmother would always say, ‘we’re a beacon of hope in the community,’” says Tren’ness Woods-Black, one of Sylvia’s 18 grandchildren and the company’s VP of Communications. “If that marquee is lit, it gives out that energy, that vibration, that soul that is Harlem.” And for the past 58 years, it’s done just that, seven days a week and without fail.

Opened in 1962 by Sylvia Woods, a South Carolina native who moved to NYC as a teenager, Sylvia’s popular soul food dishes established her as “The Queen of Soul Food.” At work, her staff lovingly referred to her as “mom,” and Mrs. Woods loved interacting with guests, often extending her own personal touch of hospitality by pulling up a chair or holding babies to allow their parents a moment to eat. The Lenox Avenue restaurant is located near Harlem’s main thoroughfare of 125th Street and sits a block away at 126th Street, which the city designated Sylvia P. Woods Way in 2014. In its nearly six decades of business, the restaurant has been an uptown epicenter for Black culture and social life, and remains popular with celebrities, former presidents, Vice President-elects (we see you Kamala Harris), and hungry tourists alike, all the while functioning as a community stalwart that never turns away people experiencing food insecurity. “We feed everyone,” says Woods-Black. “If someone comes into the restaurant and says ‘Hi, I’m hungry,’ they’re going to get food.” 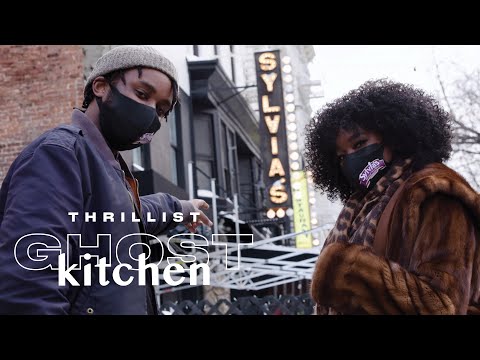 Feeding those in the community, whether they could afford it or not, is a tradition started early in the restaurant’s history by Mrs. Woods, and an ethos upheld during COVID-19 with the help of grocery distributions and newer initiatives like Sunday Supper Club. As a joint program between the restaurant, Reverend Al Sharpton’s National Action Network, and the CARE organization, Sunday Supper Club hands out up to 1,300 free meals every Sunday to a line that appears to grow with every passing week. But since the onset of COVID-19, increasing their community outreach has just been one of the many pivots Sylvia’s has had to navigate.

Earlier this year in March, when NYC restaurants were forced to close their dining rooms for the first time and shift to takeout/delivery only, the Woods family was determined to keep the restaurant running and open everyday, just like they know how Mrs. Woods, who passed away in 2012, would have done. However, their biggest concern was for the well-being of their 117 employees, some with over 30 years at the restaurant, and their regular customers, many of whom are elderly and dine at Sylvia’s as part of their daily routine. The Woods consider both groups as extended members of their family, even maintaining a roster of emergency contacts of regulars’ extended relatives to notify them in case something ever seems amiss. With all of the unknowns and uncertainties during the spring, the Woods family had no choice but to lay off the majority of their staff, and were forced to partition off the heartbeat of the restaurant, its famous luncheonette counter.

Other necessary changes to adhere to new safety guidelines and maintain daily operations at Sylvia’s were soon implemented. A new takeout/pick-up window was installed, compliance training increased, and technology like QR code menus and added partnerships with takeout/delivery platforms were integrated to make the ordering experience as easy and safe as possible. When the city allowed outdoor dining to resume in June, 13 tables for leisurely picnic-style seating were installed in the restaurant’s front sidewalk as well. And now, in partnership with Thrillist Ghost Kitchen, a special series of restaurants hosting two-week residencies from a ghost kitchen in SoHo, from January 6 - 15, Sylvia’s will offer a special menu of their world famous fried chicken and bar-b-que rib combo, baked macaroni & cheese, traditional collard greens, corn bread, and peach cobbler available for takeout and delivery in downtown Manhattan to 96th Street.

Before the pandemic, takeout/delivery orders accounted for 29% of Sylvia’s sales, and overall, the restaurant has currently returned to 50% of sales pre-COVID, which was no easy feat to achieve. And while Sylvia’s was able to secure a PPP loan, according to Woods-Black, with margins already so slim, it “definitely wasn’t a saving grace.” As a board member of both the NYC Hospitality Industry, NYC & Company, and numerous other organizations, Woods-Black has deep concerns for the future of restaurants, declaring it “a complete S.O.S. for the entire hospitality industry right now.” In addition to a strategy from Governor Cuomo and Mayor de Blasio for reopening indoor dining, as an industry that employs more people than the airlines, Woods-Black views a government bailout as also being imperative. “Without one, it’s going to change the complexion of our neighborhoods and our cities,” she adds. “And when the smoke clears, we deserve to still have our businesses be there for our community.”

This isn’t the first time Sylvia’s has seen Harlem through a crisis with nourishment, love, and advocacy. In fact, Mrs. Woods had been doing so since she first opened her doors more than half a century ago. From the Civil Rights Movement of the ‘60s, to the health crisis of the ‘80s and ‘90s—when racist policies disproportionately criminalized the Black community for drug and addiction-related issues—Sylvia’s has remained a source of strength for the neighborhood. After the assassination of Martin Luther King Jr. in 1968 led to civil unrest, buildings to the left and right of the restaurant were burned down, yet Sylvia's remained intact—a testament to its importance in the community. From the mother of Emmitt Till, who The Queen of Soul Food cried with after embracing in their first meeting, to the mothers of Amadou Diallo, Trayvon Martin, Eric Garner (who can be found volunteering during Sunday Supper Pantry), and other victims of racially-charged police brutality, Sylvia’s has also been a place of gathering and comfort for the Black community. And Sylvia’s has unfailingly been there for all the joyous, everyday moments as well. They’re the ones buying raffle tickets for local fundraisers; feeding school events and PTA meetings; catering weddings, birthdays, anniversaries, and churches; and behind important milestones for members all over the community.

Before the events of George Floyd, Woods-Black didn’t think 2020 could get any worse. But then she was devastated by the video of his death. In the wake of traumatic events like this, the Woods family was accustomed to providing Sylvia’s as a safe space for civil rights leaders to convene behind closed doors and discuss an action plan. But with social distancing practices in place due to COVID-19, the restaurant instead put on a special, socially-distanced celebration dedicated to George Floyd on Juneteenth. It was the first time Sylvia’s had observed the holiday, and they marked the occasion with food, performers, a table for voter registration, and a moment of silence in honor of George Floyd. For 8 minutes and 46 seconds, staff and event goers kneeled with a fist raised in the air.

“Passersby joined us and they kneeled, too,” recounts Woods-Black. “They didn’t even have to ask what was going on. They just knew. That moment was so powerful. All you heard was sniffling from people releasing their frustrations and sadness. Hands down, it was one of the most beautiful moments that the restaurant has been a part of.”