Where to Find Seattle’s Best Pizzas and Slices 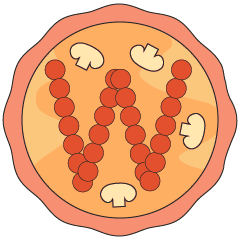 When most people think of a sequence of infinite numbers they likely think of pi, but given the sheer number of excellent pizzerias that have opened in Seattle over the last decade, you may actually be thinking of pie -- as in pizza places that are serving up pie’s so delicious you can't possibly choose between them.

Luckily you don't have to. You can create your own pizza quest and try 'em all, eating pizza everyday for the foreseeable future, or you can check out our list of Seattle's best pizzerias below to help narrow it down.

Multiple Locations
A dive-y NY-style slice spot with two locations
Opened by Seattle's beloved fried chicken purveyor, Mark Fuller, these supremely good pie spots in West Seattle and the U District are done up in red vinyl and neon that serves as a backdrop for a long list of often ironically named pizzas with either red sauce (the Bomb As Sausage with cherry bomb peppers, swiss chard & ricotta), or white (The Jabroni with pesto, artichokes, feta & arugula). Oh, and if that's not enough they've got boozy slushies, ice cream sandwiches and more.
Windy City Pie

Phinney Ridge
Seattle's best Chicago-style pizza
After a stint serving their thick, delicious pies from behind a counter at Batch206 in Interbay, Windy City finally has its own location, where they serve 12" pan pies with a caramelized, cheesy crust. You're welcome to build your own, but the pro move is picking one of their specialty pies, like the Meatza with pepperoni, sausage & candied bacon, or the Mamma Mia with meatballs & peppers.
Bar Cotto

Capitol Hill
New owner, same great pizza
The sweetest of Ethan Stowell's myriad pizza places is now owned by a long time Via Tribunali vet who's still turning out excellent pies, including their version of a Hawaiian called the Tropicale, which comes with prosciutto cotto, pineapple, calabrian chili, mozzarella, pecorino & tomato, as well as more classic options like a margherita, pepperoni, etc.

Madison Park
Tiny beachside spot with epic Neapolitan pies
The pies here, with their perfectly charred crust, and artfully assembled toppings are almost too attractive to eat, but look past this and sate your appetite with something like their prosciutto, Grana, fiore di latte number, which gets a crisp, summery feel from the mound of rocket they put on top. And, given the Indie’s beachside location, makes it the perfect choice for coastal dining.
Ashley Rodriguez/Dino's Tomato Pie

Capitol Hill
Can't miss Jersey-style square pies and booze
Opened by the minds behind Delancey (and blessed with a hilariously retro '90s-inspired website), this trapezoidal bar/pizza on Olive doles out traditional round pies, but you're going to want to go for the square cut pieces of New Jersey-inspired Sicilian-style thick crust, as only so many pieces of it are available each day.
Delancey

Ballard
Every foodie's favorite artisanal pizza spot
Delancey is included partly because we don’t want this place’s passionate fans coming after us, but mostly 'cause this Ballard pizzeria is home to some pretty fantastic tasting (and looking) pizzas. Pro-tip: Get the bacon & onion pie and follow it up with some of the D’s bourbon-roasted peaches.

Capitol Hill
Authentic NY-style slice spot that also sells 40s
This late-night destination is one of the city's only New York-style slice spots, and definitely the only place where you can drink ironically cheap beer (PBR, 40s of Olde English, etc.) unselfconsciously.

Multiple Locations
Famed festival pizzas anytime you want them
What started as a mobile pizza operation making pies at farmers markets and festivals has transformed into a mainstay pizza destination at the eastern edge of Ballard, as well as a location in Wedgewood, where the wood-fired Neapolitan-style offerings include the can't-miss-but-limited-availability Molé topped with salami from Salumi, Beecher’s Flagship, fresh mozzarella, green onions & roasted garlic on savory red sauce.
Bradley Foster/Thrillist

First Hill
New York pies topped with some of Seattle's best sauce
The hand-tossed pizza at this charmingly kitschy counter service spot (now located on Pill Hill) is made to order from a sparse list of classic toppings (pepperoni, sausage, anchovies, mushrooms, etc.), and cooks in about the same time that Roger Bannister was first able to run a mile in 1954, but probably only because the guy never ate pizza.

Downtown
Oyster topped pizza from Seattle's OG super chef
Super chef Tom Douglas perfected SP's slightly sweet, almost pastry-like crust at his bakery around the corner, and it's so good that almost anything would taste amazing on it. But you'll want to spend your clams on the pie topped with diced, fresh-shucked ones from Penn Cove, one of the Puget Sound's premier bivalve purveyors. Seriously, this pizza cannot and should not be overlooked.
Jenny Jimenez

White Center
Pizza that makes the trip to White Center worth it
Posted up on a block bursting with specialized grocery stores, tattoo parlors, and smut vendors, this unassuming, cafeteria-style joint uses hand-mixed dough and largely local ingredients to produce RAT-City's best pizza's including one with Mondo & Sons Italian sausage, fresh garlic, and Mama Lil’s peppers that's called The Favorite… and is the favorite of, well, everyone presumably since that's its name.

West Seattle
VPN-certified wood-fired pies in the Admiral
From a guy who helped launch places like Via Tribunali, this narrow 40-seater with a dark wood bar takes Neapolitan pizza traditions more seriously than most places, as evidenced by the red tiled wood-fired pizza oven that was handmade in Naples and weighs 2,500lbs, or how heavy you'll be after eating as many of their deliciously simple pies, highlighted by two different margherita pizzas, a four cheese, and a pancetta with mushroom & onions -- all of which can be topped with a perfectly runny fried egg.
Primo Pizza Parlor

First Hill
Historic space where it's almost always happy hour
This underrated spot in what used to be the lobby of a (still) gorgeous old-timey hotel is serving a grand selection of classic pies, like the Italian fennel sausage with peppers & mushrooms or a prosciutto-topped pie, which gets a mess of arugula, cherry tomatoes, and oil piled on it when it comes out of the oven.

International District
Vegetarian pizza you'll actually enjoy
Fifteen years after closing, this grunge-era Belltown mainstay reimagined itself as a salvaged, wood-heavy Chinatown pizzeria with seats for 20, and tons of touches from the old space including the vintage signage. They've also got a selection of pies that do something almost impossible: make you forget they’re vegetarian. We're not kidding. Just try the veggie pepperoni and see what we mean.

Sign up here for our daily Seattle email and be the first to get all the food/drink/fun in town.

Bradley Foster is a former Thrillist editor whose favorite pizza place (Primo) is a little too far away, so he usually just gets Pagliacci.
Our Newsletter