Amsterdam seems to wear it all on her sleeve, from the (ahem) coffee shops, to the sex shows, to the ordinary locals who just say NO to closing their curtains at home. But underneath even this showy openness lies centuries of secrets... Until now.

The Old Church is a graveyard

If you've ever been inside the Red Light District's Mama “church” (now more likely to be filled with partiers or art and music lovers than worshipers), you can't help but be awed by its, well, awesomeness. For a Calvinist joint, it's sure got some ornate pulpit swag. So, it can be easy to miss the floors, full of carvings. Carvings of names. Of dead people. 2,500 grave stones, to be precise, with 10,000 bodies buried beneath.

Located in the foundation of the bridge crossing the top of the park, the Vondelbunker is a product of post-WWII paranoia turned '60s hippie hangout. Now it's the home of the Schijnheilig creative collective, which hosts (literally) underground gigs and art events (usually for free). Check its website for events... or just try the door when you're walking by if you're feelin' lucky. Punk.

There are free classical and jazz concerts every week

In addition to the free lunchtime concerts at The Royal Concertgebouw in Museumplein every Wednesday, the Muziektheater in Waterlooplein, better known as the Stopera, also offers free concerts every Tuesday at 12:30pm in the foyer (next to the awesome, floor-busting violin man). There's more, music fans: the Badcuyp, Muziekgebouw aan t’ IJ, and Bimhuis all also offer the occasional free show. Just check their schedules. And get there early, wherever you're going.

Across the narrow Raamsteeg from the original Café Gollem is a pastry bakery called Traiterie Chef. Above this bakery is a weird little room you won't find by accident: a teapot museum. Naturally they serve high tea here. You can even play dress up. And then go for a Belgian beer across the street and pretend that never happened.

The Vrankrijk squat has a public bar in it

Just up the street from the teapot museum is one of the city's oldest and best-known squats. (Where people live in abandoned buildings in a legal gray area.) The building dates from 1875, the squat from the '80s. (Between it was used as a carpenter's studio, printing office, and document-forging base for the Resistance.) There's a bar behind a checkered door off the Spuistraat, which was closed for a couple of years after a bad brawl -- but now it's open again. (Yay!) You can guzzle down its cheap beer to punk music or show up for one of its frequent queer nights.

There's a free hallway of art next to the Amsterdam Museum

Head into the Schuttersgalerij off the Kalverstraat (well, actually, via the St. Luciensteeg or museum courtyard), and exit next to the Begijnhof. On the walls you'll find Golden Age civic guard portraits, head-scratching modern spoofs of those, a view of the Dam Square before everything changed, and a whopping portrait of Napoleon a-conquering. Dominating the space at one end are two life-sized statues of David and Goliath, which once amused Golden Age peeps in a labyrinth that used to exist in the Jordaan. (Sorry, the labyrinth's long gone. Yeah, we're bummed too.)

They were dug up in the'90s in the prep to build the Golden Tulip hotel and parking garage. It could be the legendary Heren van Amstel castle, home to Amsterdam's earliest lords, that was supposed to have stood on this spot... but most archeologists think it's not that. Whatever it is, as anyone who walked past the excavation site in the '90s or '00s can tell you, it's old and it's cool -- unfortunately ABN Amro pushed to get it filled back in so the building project could continue. But it's still down there. So, there's still hope it could be made into an awesome exhibit yet. (Right???)

There's a hidden tunnel under the bar Papeneiland

Just ask a bartender to point out the entrance at the top of the stairs. One of the city's oldest cafes, the “Papists' Island” dates from the days when Catholicism was illegal and the city's Catholics worshiped in hidden churches. One of those, the Posthoornkerk, used to be across the canal. (There's now a very un-hidden church by that name around the corner.) The tunnel from the church under the canal into the bar's basement was there in case the fuzz decided to care what people were getting up to there. The hidden church is gone, but the bar is still a pretty awesome place to wet your whistle in Golden Age style. Even Bill Clinton hung out there once. 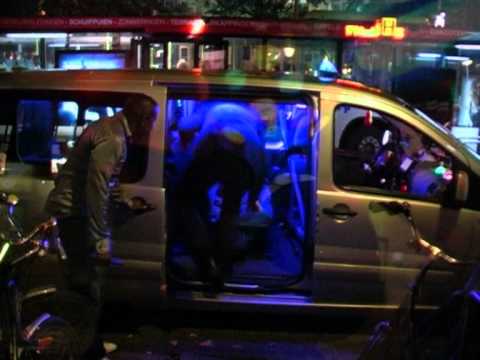 The number of the disco taxi

The best way to discover the disco taxi is to have it roll up unexpectedly to pick you up when you're haplessly trying to get from point A to B. Trust us, you will forget all about point B once you get in and the bedazzling Maroni Sonelli karaoke party cab adventure begins. Since we can't all be that lucky by chance, though, we'll just go ahead and give you the number: 0654698187. Make this happen.

You can ice skate on a roof in Rembrandtpark

On top of the Ramada Apollo Hotel in Rembrandtpark is Floor17, a wine bar with a big terrace. That big terrace has been transformed into a skating rink, called “Zell am Rembrandt” -- with plenty of terrace heaters, mulled wine, and hot chocolate on the side. Hurry up, though: you've only got until the end of the month to get in on this secret.

There's a farm behind the Westerpark that gives away free stuff

The Buurtboerderij Ons Genoegen (“Neighborhood Farm Our Pleasure”) saved the 19th-century fields that the encroaching train tracks almost killed and have transformed them into sheep pastures, chicken coops, and a cheap, fresh restaurant. The idyllic space (you will forget that the city exists, let alone that you're technically still in it) hosts regular events, from record-spinning sessions to live music to food festivals. And, yep, there's a weeggeefwinkel (“giveaway store”) where other people's trash can become your treasure, and (ahem) vice versa, for the low low price of nothing.

There's a party at the Van Gogh Museum every Friday

The events held every Friday until 10pm might be art based, music based, crafts based, or just completely random. Whatever it is, the cocktail bar and DJs will make sure it's interesting. Try to make it on the first Friday of the month, though, when they tend to amp up the offering.

There's a bar in the horse stables next to the Vondelpark

The 19th-century Hollandsche Manege riding school looks pretty amazing. Good thing you don't have to be a student to enjoy the view: you can munch on high tea (with a reservation) or just sip a (free with entrance) coffee or (not so free) cocktail and watch other people try to tame horses from above. Want some equine affection of your own? The stables out back are open. And there are ponies. (Entrance to the “living horse museum” is €8 and comes with a 10-minute movie.)

In the 1670s, Amstel 216 was the home of diplomat and six-time Amsterdam mayor Coenraad van Beuningen. Then he had a very bad year: four armies attacked the Netherlands, he got on the wrong side of the Dutch king, lost all his money to misplaced speculation, and his wife left him. Coenraad went a little bit crazy. Accounts say he opened his veins to scribble on his house's white exterior walls: his name, the name of his wife, a ship, Kabbalah verses (he got a little obsessed with the apocalypse), and more. The stories that say the blood cannot be washed off even today are at least partly true: when they tried power-washing the place in 1937, they only revealed more writing...