Home Alone is unquestionably a Christmas classic, along with being one of the most financially successful movies of the 1990s. Released 25 years ago today on November 16, 1990, the Chris Columbus-directed family comedy is fondly remembered for its slapstick humor, its unapologetic sentimentality and a star-making performance from Macaulay Culkin as young Kevin McCallister, a boy left behind in the Chicago suburbs by his rich, negligent parents who fly off to Paris and forget their spawn in a million dollar mansion. You probably remember the aftershave, the lovable shovel-wielding neighbor and the cruel dismissal of Buzz’s un-photogenic girlfriend (Woof!). What you might not remember? The film’s utter brutality.

That’s right: this is a sick, twisted film. After setting up McCallister as the film’s charming, impish protagonist, Columbus and co-writer/producer John Hughes encourage the audience to laugh along with our blonde-haired vigilante as he deals out violent bodily harm and psychological torment to the two incompetent thieves who show up at his house. While others have pointed out the many alarming parallels between young Kevin and Jigsaw, the sadistic anti-hero of the Saw franchise, there’s another movie that Home Alone has occasionally reminded me of: Sam Peckinpah’s brutal 1971 revenge film Straw Dogs. But surely, there couldn’t be a connection between innocent Kevin McCallister and mild-mannered David Sumner, the neebish mathematician played by Dustin Hoffman--or could there be?

According to an excellent Slate feature on the filming of Home Alone’s booby-trap-filled final act, Straw Dogs was at least a common reference point for one member of the film’s production staff. In the article, the writer speaks with the film’s production designer John Muto, who says, “I kept telling people we were doing a kids version of Straw Dogs.” He actually said that. “A kids version of Straw Dogs.” If you haven’t seen Straw Dogs, here’s a taste of what Muto is referring to: 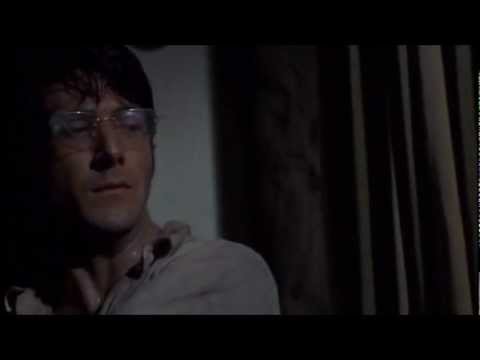 Look’s pretty familiar, right? The creepy invaders trying to make their way into a dark home, the nervous protagonist lurking in the shadows and the brutal justice doled out to the goons. This is proto–Home Alone style chaos. While the actual plot of Straw Dogs is quite different than Home Alone’s more kid-friendly hijinks -- Hoffman moves to Cornwall, England with his wife and finds himself threatened by her ex-boyfriend and his townie friends--the final act of each film is pretty similar. Let’s compare: 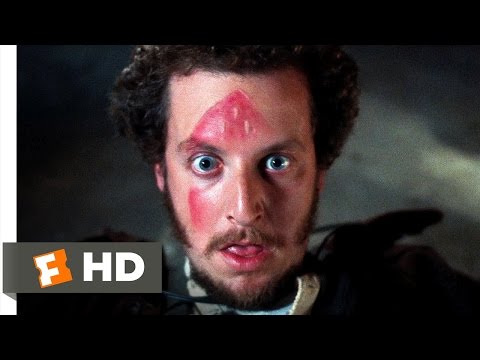 If anything, the relatively light, jovial tone makes the violence in Home Alone more disturbing than in Straw Dogs. John Williams’ springy score, the real agony of Joe Pesci and Daniel Stern as the thieves, and the gleeful mugging of Culkin really makes the images stand out. For example, take a look at this:

How about that one? Is that Joe Pesci or an angry British man from Straw Dogs? OK, fine, the sideburns kinda give it away. It’s Straw Dogs.

Things got even more violent in Home Alone 2: Lost in New York, where Daniel Stern sticks his flaming head in a toilet filled with some sort of flammable liquid. There’s surely a defense to be made of the series’ absurd violence by saying that it’s merely a live-action cartoon, a Wile E. Coyote–style explosion of kinetic action. As a child, it’s easy to be sucked in by the violent fantasies peddled by these movies -- don’t act like you’ve never wanted to toss a paint can off a banister at some distant relative -- but at a certain point, the film’s constant violence starts to wear you down and you leave these movies behind. And when that happens, Straw Dogs will be waiting for you.

Dan Jackson is a Staff Writer at Thrillist Entertainment and he has cried while watching five minute increments of Home Alone on cable. He's on Twitter at @danielvjackson.