While April's Avengers: Endgame was framed as the grand finale for many square-jawed faces in the Marvel Cinematic Universe, with long-running heroes saying goodbye forever, it was also a quieter conclusion for the two directors behind some of the studio's biggest hits. The Russo Brothers -- who in addition to 2017's Avengers: Infinity War, 2016's Captain America: Civil War, and 2014's Captain America: Winter Soldier, also made their names on television comedies like Community and Arrested Development -- lived and breathed all things Thanos for a long stretch of their careers. Now, they're venturing out from comic book blockbusters with AGBO Films, a production company they launched with a reported $250 million investment from Chinese investors and an eye toward building their own empire.

The company's first major theatrical release is 21 Bridges, a cop thriller starring Black Panther's Chadwick Boseman as an officer leading a massive manhunt through Manhattan. It's part of an upcoming slate that includes the Iraq drama Mosul and the brothers' post-Endgame directing project, Cherry, an adaption of Nico Walker's acclaimed novel about a PTSD-rattled opioid addict who turns to robbing banks. The two Ohio-born filmmakers view 21 Bridges, which was directed by fellow television veteran Brian Kirk (Game of Thrones), as indicative of the type of "elevated genre" film they want to make. "It's set in the world of this classic cinema form that many of us have come to know and love over the years," explains Anthony over the phone. "That's kinda like a sweet spot."

I spoke with them about their work on 21 Bridges, their new chapter as producers, and one of the most incendiary topics of online commentary in recent months: the meaning of the word "cinema." Director Martin Scorsese ignited the fire when he described Marvel movies as "not cinema" and compared them to theme parks, later clarifying and explaining his remarks in an essay for The New York Times. Though some Marvel directors like Joss Whedon and James Gunn responded on social media, the Russos largely stayed out of the fray before sharing their thoughts with me here. 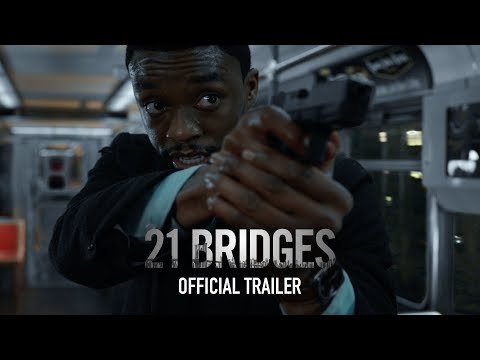 Thrillist: When did 21 Bridges come across your desk and what made it a project you wanted to do?
Joe Russo: About two years ago during Infinity War, we just thought it was a really compelling concept that a crime so egregious was committed and Manhattan had to be locked down for a manhunt. We have an emotional connection to elevated genre films. Our father was a huge genre buff when we were kids, and a big treat for us was watching movies with him where we would digest films like The French Connection, ...And Justice For All, The Taking of Pelham 123, and Dog Day Afternoon.

These were movies about crime in New York City that were compelling and propulsive to watch, but also had social context and compelling themes to them that made you think when the movie was over. We just felt like we hadn't seen a hard-hitting New York police story like that for some time on the screen and we felt like this was a great concept to build a movie around.

How do you two approach your roles as producers on a movie like this? How often are you on set? Are you watching footage every day?
Joe Russo: It's a little bit of everything. Our job is to be creative godfathers to everyone working on the project and guide it to a place that's artistically fulfilling to us as producers who are putting our names on a project. We're very hands on from the execution of the rewrite of the script to finding the director and hiring the crew to the casting of the movie. It's all very personal for us.

We were both on set at separate times. Spiro Razatos, who did a lot of action for us for our Marvel work and came to work on this film as well underneath Brian Kirk, was the second unit director. Greg Berry, who was the production designer for us on Civil War, production designed the film. Henry Jackman, who we've worked with on many occasions, did an incredible score. Obviously, Chadwick [Boseman]. So there were a lot of people who are part of our creative family that we brought in to work with, and for us that's the critical part of producing: to shepherd and guide everything down the correct path.

One of your first movies was Welcome to Collinwood, which was produced by George Clooney and Steven Soderbergh. What kind of lessons did you learn from working with them early on in your career?
Anthony Russo: Yeah, early in our career we were produced by artists like Soderbergh and Clooney, but we were also produced on Arrested Development by Ron Howard. So we had great exposure to real mentors in terms of how do you as a fellow artist enable another artist to do your best work and make your best movie. I think our experience with all of those people was that we like to empower people to bring all of their creativity to the table.

When Joe and I direct the environment we like to create on set is a welcoming one. We like a family atmosphere. We like everyone to feel like they can contribute and we're all making the film together as collaborators. That's the same directorial energy we like to bring to our producing as well. We like to make everyone feel like they're empowered to bring their most personal experiences and their most vibrant creative instincts to the table in order for us all to realize something special for audiences. I think that's very much our process and we certainly learned that from those guys that gave us a platform to do our best work.

Obviously, Avengers: Endgame was a huge global hit. Does that type of financial success change how you think about success at all? How do you determine if 21 Bridges a success?
Joe Russo: The metrics that we've discovered that best fits us for success is "do we get out bed happy every day that we made the project." We love this film. We loved the execution, the acting, the action, and what it has to say, so we'll always be happy with this. That's a success for us. When you send a movie out into the world, it's really up to the world at that point. It's beyond our control, but we'll wake up happy for the rest of our days knowing we made the movie we wanted to make.

In the past, you both have discussed how audiences are increasingly seeking out "event-size" films. The scale of 21 Bridges is right there in the title -- it's a lot bridges. Did you think of this movie as a way to event-size the traditional cop thriller?
Anthony Russo: We're really into New York films and New York City itself. The concept that you could close Manhattan completely was such a risible and epic concept. It's one that I can't remember ever hearing, but it also sounds plausible. It sounds like there could be a scenario where you would accept it. So there's clearly a grandeur to that concept that's relatable and exciting, and I think that was part of the appeal to the movie for us from the get go. And, yeah, giving the audience a unique experience when they go to the movie theater is part of it; again, to bring audiences to the theater you've got to be bringing something to the table that's very singular and unique. You've gotta give them a reason to leave the house. With 21 Bridges we aspire to give the audience that type of experience.

Recently, Martin Scorsese made a comment in an interview and later wrote an essay in The New York Times about Marvel movies not being cinema. What was your initial reaction to his remarks and the larger conversation that followed?
Joe Russo: I think that the comments are understandable. In a way, the next generation has elbowed its way into the driver's seat with the tidal wave of enthusiasm about how they prefer to digest narrative. However, it's very difficult to have an intellectual dialogue with someone who has admitted that they actually haven't seen the films. We prefer to define cinema as a film that brings together people and fosters a sense of community, where they can all share in a common and profound experience together. That's why you go into a theater with hundreds of other people. They're looking for a pure experience.

We don't look at the box office success of a movie like Endgame as a signifier of economic success. We look at it as a signifier of emotional success. Very few films in cinematic history have had an impact on a global audience the way that film had. We were in those theaters. We heard the cheers and the audible sobs, and saw the audience reacting in a way we'd never seen in a movie theater.

Anthony Russo: Like Joe said earlier, it's hard to address the issue too deeply because again it goes back to the fact that it doesn't feel like he's actually seen the films. So it's hard to have an actual dialogue about them because of that fact. Also, it's hard to have this conversation because any time you try to put art inside a box, art is going to defy you. Any artist should know that. The reason cinema is as vibrant and relevant as it is today is that it's constantly evolving. If it can simply be confined to some conventional idea, it flatlines at that point and stops being vital and growing.

Joe Russo: And it can be dismissive of an entire generation. But also, at the end of the day, what do we know? We're just two guys from Cleveland, Ohio and cinema is a New York word. In Cleveland we just call them movies.

I know you're shooting Cherry in Ohio now, but were you following the debates online or were you mostly just consumed with work?
Anthony Russo: Yeah, we're shooting a movie right now, so we're very focused on that. We read through various things, but it didn't seem like the kind of thing that needed addressing right away because of the lack of validity in his point of view. It wasn't something where we were like, "Oh we need to pay attention to this."

​​​​​This interview has been edited for clarity and condensed.