A Tribute to the Insane '30 Rock' Episode 'Leap Day'

Happy Leap Day! It's so great to see all of you here wearing your festive blue and yellow, eating your slices of traditional Leap Day rhubarb, and preparing to cue up Jim Carrey's holiday classic, Leap Dave Williams.

If you have no idea what I'm talking about, then give yourself a hard Leap Day poke in the eye, because it's time to refresh yourself on one of the best holiday-themed gags ever written: the 30 Rock episode "Leap Day." While 30 Rock was in its sixth season and entering Rachel-dates-Joey shark-jump territory at this point, this 2012 episode was a late-series gem, gifting us with one of the most ingenious made-up holidays in recent memory. 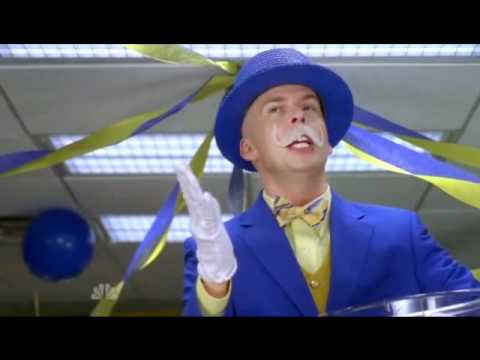 In "Leap Day," Liz Lemon (Tina Fey) goes to the office, only to find that everyone is celebrating Leap Day, a national holiday that she, like us, never knew existed. The holiday's mascot is Leap Day William, a man with gills who emerges from the Mariana trench every four years and trades children's tears for candy. Celebrants are supposed to dress in traditional blue-and-yellow garb (if you forget to, you'll get a poke in the eye), eat rhubarb, and try things they've never tried before, because nothing that happens on Leap Day matters and "real life is for March!"

Much like a real holiday, people gripe about it being too commercial and the spirit of the holiday being spoiled by PC culture. It's so convincing that can practically hear President Trump condemning the liberal media's War on Leap Day as we speak.

The holiday even has its own cheesy tie-in movie, Leap Dave Williams, a cross between Liar Liar, Groundhog Day and The Santa Clause that stars Jim Carrey and Andie MacDowell, and ends with Carrey's uptight-lawyer-turned-amphibian yelling, "I saved Leap Day! And connected with my son! And I solved a big case of murder!" The attention to (fictional) detail is so impressive that if you don't watch this episode and find yourself getting artificial flashbacks to your own childhood Leap Days, I'll eat my seasonally appropriate blue boater hat.

"Leap Day" isn't the only memorable fictional holiday -- who could forget The O.C.'s Chrismukkah or Seinfeld's Festivus? -- while Parks and Recreation, The Middle and Modern Family have all had their own Leap Day-themed episodes. But it's 30 Rock,& with its many visual gags and balls-out commitment to absurdity, that gave us the version we'll always remember. In addition to building an original mythology, the episode is a vicious skewering of the sappy holiday tropes we know all too well: Jack (Alec Baldwin) visits his Leap Day Past, Present and Future after eating tainted rhubarb and ultimately learns to be a nicer person, while Leap Dave Williams is a remarkably self-aware parody of the crappy Christmas flicks that studios churn out with regularity.

As an episode, "Leap Day" represents what 30 Rock did best, building a ridiculous counter-world that acts as a funhouse mirror of our own, reflecting and distorting our own cultural idiosyncrasies. It's so damn clever because you can totally imagine Leap Day existing, even as you recognize how stupid its components are. But hey, is it really that much of a leap from a candy-toting fish-man from the Mariana trench to a chimney-sliding fat guy from the North Pole who rides a flying reindeer?

So on this February 29th, 2016, we raise a glass of rhubarb punch to, Liz, Tracy, Jack, Kenneth and the rest of the 30 Rock gang. We pledge to live every day as if it's Leap Day and every Leap Day as if it's our last.