Netflix’s Follow-Up to 'A Christmas Prince' Is Beautiful, Royal Garbage

Back in 2017, a few days after it dropped on Netflix, A Christmas Prince took the world by storm. The story of a bottom-rung magazine writer on an undercover assignment to get the story on a notoriously womanizing prince that ends in, surprise, the two falling in love was a runaway hit. It was the gift that kept on giving, becoming so inexplicably popular that the Netflix Twitter account publicly shamed the 53 people who had apparently been watching the movie every day for nearly three weeks. With that kind of blatant success with an original holiday movie, why not make a sequel?

But when I sat down to review the followup, A Christmas Prince: The Royal Wedding, which debuts on the streaming service this weekend, I realized something troubling: I couldn’t remember a single thing about the plot. This is partly because I stupidly decided to watch A Christmas Prince, A Christmas Prince: The Royal Wedding, The Princess Switch, and The Christmas Chronicles back-to-back over the course of a weekend, miring myself in a very Netflix-by-way-of-Hallmark brand of holiday cheer and a dangerously skewed perception of what it takes to rule a small country. (Netflix would have you believe even a pastry chef from Chicago could do it!)

But I also forgot most of A Christmas Prince 2’s plot because it doesn’t really have one. Maybe that’s too mean: it definitely has a plot, one that’s actually a little interesting this time -- there’s drama! intrigue! betrayal! a romantic side-plot wedged in right at the end that’s kind of hot! -- but Netflix knows that the only reason anyone is watching this movie is to see two cute people make out and yell at each other a little bit and then kiss again and get married. Nothing bad that happens has any real consequences, and the people who are enemies in the beginning end up friends in the end. Everything and everyone in the movie end up just fine, which is exactly what made the first one so appealing in the first place.

The new movie picks up nearly a year after its predecessor left off: Amber Moore, the unassuming American journalist who tricked her way into Aldovian Crown Prince Richard's heart, is now in the throes of wedding planning, having shipped herself and her father to the tiny fictional country for a whirlwind few weeks of royal photographs, royal dress fittings, and royal toboggan racing. The prince is also beset by problems, having fallen out of favor with the public for his failed economic reforms -- money that should be going to the people seems to be magically disappearing itself into someone else's mysterious coffers -- and though Amber attempts to help, her suggestions are rudely rebuffed by Lord Leopold, a friend of the family brought in to help with the whole mess.

Meanwhile, Amber is having troubles of her own getting used to being constantly in the public eye, and nearly comes to blows with the castle's staff, who insists she ought to stop blogging about every single thing she and the royal family do together. Her personal style is squashed by a tittering wedding planner who clearly would much rather make the day all about himself than the actual bride. When Amber attempts to find out what's going on with Aldovia's money herself, she has to do so in secret. When her blog is outright censored, she looks to Richard for help in pushing back against his family's crackdown, but in a moment of weakness he caves. Will the truth come out in the end? Will she have to walk a lacy, beaded monstrosity down the aisle? Can the royal couple's love survive Amber's blog??

What’s most fun about A Christmas Prince: The Royal Wedding is how extremely self-aware it is. To their credit, the actors throw themselves back into their roles: Rose McIver, Ben Lamb, Alice Krige, et al, return, and, in fact, the only reprised character played by a different person this time is Amber's father, who was recast for the sequel -- and the movie finds at least two opportunities to comment on it. One of his first lines is, "I feel like a brand-new person!" and Prince Richard's sister Princess Emily (Honor Kneafsey) comments that he looks different from how he seemed in Amber's pictures.

The movie even advertised itself with a short teaser featuring Amber, Richard, and Queen Helena watching the broadcast of the real royal wedding between Prince Harry and Meghan Markle from their couch, making little comments about the guests' outfits and comparing it to how their wedding will be in a few months' time. 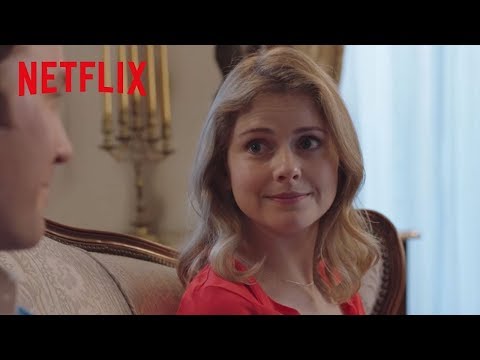 Prince Harry and Meghan Markle’s wedding seemed tailor-made for the kind of person who fantasizes about a normal all-American gal finding love and becoming royalty. That is, if you put aside the fact that Meghan Markle was already a public persona in her own right, a celebrity in the States who'd been around even before the start of Suits. Even so, the gleeful Hollywood appropriation of the royal couple's fairytale into countless rags-to-riches Lifetime-style romances -- and their consistent popularity with the general public -- shows no signs of stopping. The "It could happen to you"-ness of these stories and their painfully predictable plots are factory line products for the holiday season when all you really want to do is curl up with "something nice," as our moms would say, and watch two reasonably attractive people chastely make out in the snow.