'A Christmas Prince: The Royal Baby' Gets Even Cheesier Than the First Two Movies

This story contains spoilers for A Christmas Prince: The Royal Baby.

There's a thing that happens in young-adult literature, particularly in long sci-fi and fantasy series whose plots unfurl over multiple books involving lots of complicated and made-up places, names, and events: In all the books following the initial novel, there's a little recap of what's happened before, just in case the sievelike minds of the 12-year-olds reading the books have lost the plot. The Animorphs series was particularly good at this, even when each book was told from a different point of view. There were 54 books (not counting spinoffs) in that series, so recapping everything that came before became a real feat as the story progressed.

Unfortunately, this review is not about Animorphs. This review is about Netflix's A Christmas Prince: The Royal Baby, the third installment in the streaming service's baffling holiday movie series.

I would have loved a little recap of the first two movies at the start of A Christmas Prince 3, at least so I could remember everyone's names and their relationships to each other. There isn't one, so for the first 20 minutes or so (unless you've recently rewatched the first two) you'll be pretty lost. 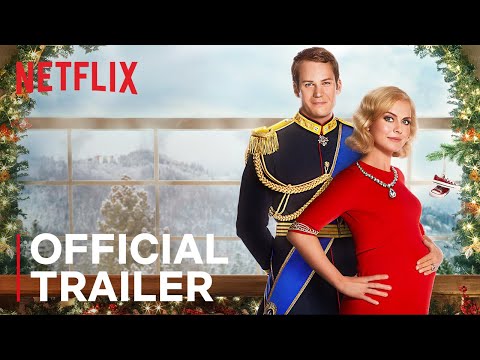 The Christmas Prince movies take place entirely in the fictional kingdom of Aldovia, ruled by a very nice and proper royal family whose son Richard (Ben Lamb), now king, has taken regular American gal Amber (Rose McIver) as his queen. In the first movie, Amber was a journalist who snuck her way into the palace looking for a scoop and fell right into the arms of the resident handsome prince, who immediately fell in love with her. In the second movie, they plan their royal wedding and lots of people tell Amber she needs to blog less.

In the third installment, Amber is pregnant with the next prince or princess (they'd rather be surprised on the day of the birth than stage a potentially deadly gender reveal). She and the king also have to ceremonially sign a treaty with another neighboring fictional country, Penglia, whose royal couple have flown in during the Christmas holiday -- or else their kingdoms go to war again, of course. But on the day of the signing, the treaty goes missing! Oh no! And then they discover that if the royal families don't sign it in time, a curse will be put upon the king of Aldovia's firstborn child! Oh no!!! Also, Amber's best friend, who you maybe forgot, is now romantically involved with the villain of the first movie, who you definitely forgot.

Due to the nature of the series, everything that happens in this couple's lives happens at Christmastime, which makes me believe the rest of their lives must be dreadfully boring. The Christmas Princes are very, very low-budget, so it's not like anyone can actually go anywhere. One shot in the beginning of the royal couple's tropical "honeymoon" takes place digitally superimposed onto desktop background stock footage of a sandy beach. But look, this is what we expect from this series anyway. If Martin Scorsese or Roger Deakins got involved, it just wouldn't be A Christmas Prince.

And the zero-budget nature doesn't mean there isn't some stuff for the fans. Amber makes several references to her past as a journalist, as she so loves to do; there's a scene where someone has to gallop on a horse through fluffy, freshly fallen snow; and the final act hinges on the palace's dungeon, a strained in-joke that has haunted the series since the first movie.

The thing is, though, that these movies are better as trailers than actual movies. Every scene in A Christmas Prince 3 that's not in the trailer feels like it was put there simply to pad out the empty space; every attempt at banter or jokes is partnered with a chuckle-heavy pause that drags for five seconds too long. It's remarkable that every scene is approximately one minute long, so, though it's around 90 minutes in total, by the end it feels like you've just watched a three-hour epic. In their insipid quest to appear as thumbnails you'll inevitably scroll past on your Netflix homepage, these holiday movies have mastered the art of bending time into nonlinear shapes, trapping us in an ever-blooming mandala of ribboned garlands, Christmas trees, and hot cocoa sipped in snowy woods extending endlessly into a horizon you'll never reach. It's always Christmas in Aldovia. It's never Christmas in Aldovia.