If You Liked the First One, You'll Probably Enjoy 'A Quiet Place Part II'

It's more of the same, but that doesn't mean it's no fun.

It came as no surprise when 2018's runaway horror sci-fi hit A Quiet Place almost immediately got a sequel order. Fun, scary, and exciting, it was a welcome respite from the endless surge of reboots and remakes and blockbuster properties based on other properties; a lean, unique original story from a well-liked actor proving himself to be just as capable as an actor-director. With A Quiet Place Part II, director John Krasinski (mostly behind the camera this time following his character's demise in the first film) fleshes out the universe the first movie built, an enterprise that's just as rewarding and fun as the first time around when it's not overly focused on trying to set up the next one.

After an opening prologue that shows us how the very beginning of the alien invasion interrupting their Little League baseball game, we catch up to the Abbott family minutes after the conclusion of the first movie (more on that later), as mother Evelyn (Emily Blunt) and her kids pack as much as they can before abandoning the farmhouse they have hidden in for that past year. Yes, the infamous "WEAKNESS" whiteboard makes a cameo as they go from room to room sifting through all their essential items. With an amplifier and the cochlear implant belonging to Regan (Millicent Simmonds, who remains the best part about this series) that they've fashioned into a weapon against the sound-sensitive alien invaders, they set off into the mountains toward what they believe to be another settlement, carrying their weapons and the soundproof box for their newborn baby with them. When they get to their destination on the map, they find Emmett (Cillian Murphy), a former friend from their small town who is now mourning the loss of his own family, reluctant to involve himself with the Abbotts in any way. 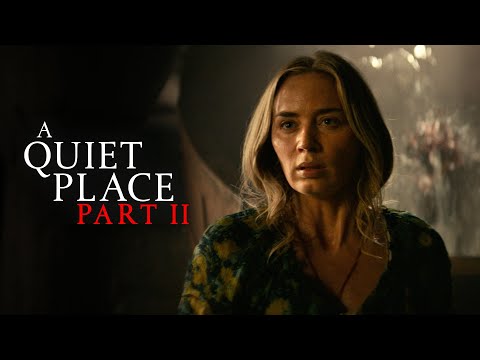 The movie splits its cast into two groups, sending Regan and Emmett off to search for signs of civilization, while Evelyn waits behind with the baby and her son Marcus (Noah Jupe), staying as quiet as possible to avoid the attention of the sound-sensitive aliens that hunt them. The split allows for a number of parallel scenes of white-knuckle suspense, with Evelyn navigating the ruins of the town's pharmacy while Emmett and Regan tangle with sadistic wild men, all the while careful not to attract the attention of anything that can hear them. There's more of a Walking Dead sense to this movie, with many conversations about "people worth saving" and encounters with communities outside this one small family focusing more on the humans, now that we've become familiar with the aliens. Regan and Emmett, in particular, share the bulk of the most emotionally affecting scenes, and both Simmonds and Murphy are riveting to watch. Still, the excitement always comes when it's man versus sound-sensitive screeching spider of doom, making many of the action sequences seem overly familiar.

Perhaps the only really bothersome thing this movie does is awkwardly ditch the superb, killer final moments of its predecessor: Emily Blunt locking eyes with Millicent Simmonds and determinedly cocking a shotgun after blowing the head of an alien to pieces, ready, for real this time, to fight back against the pack of creatures seen on the CCTV monitors rushing towards the house. Part II either forgets that great moment ever happened, or we're supposed to figure that this movie picks up after an action scene that we simply just missed. It was a good ending, one that teases the possibility of more while giving the audience enough information to figure out for themselves where this story is going next without needing to sit through another one. Fun and exciting as A Quiet Place Part II is, it can't shake the notion that the now-series has been cinematic universe'd, the whole purpose of this one simply to lead to the next, and the next, and the next, every "ending" reduced to a jumping off point for something more. It feels a tiny bit like cheating, or like a whiteboard set up in the center of every shot that can't help but give away its own plot.