The first of HBO Max's four 'Adventure Time' specials features BMO on an adventure fit for a space cowboy.

In 2018, Pendleton Ward’s Adventure Time ended its eight-year, 283-episode run on as perfect a note as it could manage with its touching 45-minute finale, "Come Along with Me." The many stories and relationships between Finn the Human, Jake the (magic, stretchy) Dog, and the inhabitants of the Candy Kingdom passed into legend, and a new (large) boy and his compatriot far in the future were inspired by their tales to embark on adventures of their own. Though this conclusion was somewhat open-ended, the series was done, and Finn and Jake’s adventures would continue in our imaginations and reruns.

But, with the arrival of HBO Max, Adventure Time is back with Distant Lands (named for a line in the original show’s theme song), a series of four, hour-long specials focusing in on Ooo inhabitants familiar and new. The miniseries format is something the series had attempted in the past with mostly strong results, with Marceline the Vampire Queen’s family backstory recounted in Stakes, and a long-awaited explanation of Finn’s heritage in Islands.

The first of these new specials focuses on secondary character BMO (Niki Yang, as funny as ever), a sentient video game console who, in the original series, was constantly getting themselves into trouble during one of their many flights of fancy. Adventure Time Distant Lands: BMO decompresses that formula across an hour, with very charming and funny results. 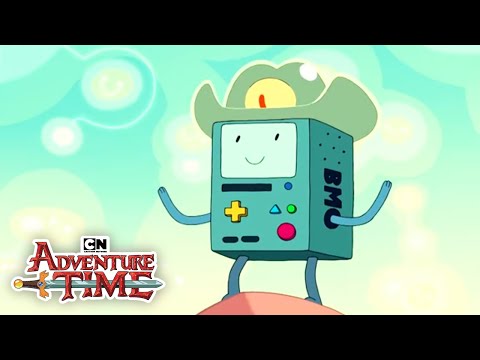 The first of these new specials focuses on secondary character BMO (Niki Yang, as funny as ever), a sentient video game console who, in the original series, was constantly getting themselves into trouble during one of their many flights of fancy. Adventure Time Distant Lands: BMO decompresses that formula across an hour, with very charming and funny results.

The special begins with a 3DCG trip through BMO’s robot body, but emerges in a scene that feels pretty traditional for Adventure Time, with a cowboy hat-wearing BMO performing a nonsensical but sweet country song about potatoes after observing some cosmic weirdness. For some unknown reason, BMO is headed to Mars, but is thrown dramatically off course as they stumble into a meteor shower, and encounter an alien orb with a single, giant eye. After it scans BMO and reacts with what seems to be delighted surprise, the little robot is dragged across the universe via a 2001: A Space Odyssey-style wormhole, landing in a space station referred to as The Drift.

The new anthology format allows the series to play a little more with homage, as this episode skips right from one reference into another, as BMO literally lands straight in the middle of a conflict between two Mad Max-esque factions in, immediately making enemies of them both in a weird spin on the “man rides into town” format initially spin by Akira Kurosawa and Sergio Leone (I can’t believe I made this comparison either). It then takes another turn, as BMO is soon rescued by a humanoid rabbit named Y5 (Glory Curda). After being fixed up, BMO drags Y5 around on an adventure to save The Drift, sections of which are sporadically dying for reasons unknown.

The Drift has its own post-apocalypse going on, though segmented into biomes of different habitats like the original show’s Land of Ooo, it’s somewhat different -- presented as a sort of cosmic company town, started by all-too-familiar "utopian" tech entrepreneurs. Of course, BMO promptly declares themselves sheriff before leaping at every chance to fix the problems of people they’ve never met.

The Drift is run by a strange man named Hugo (voiced by none other than Randall Park), a tech magnate who acts with humility but still has his name plastered all over the town. If that wasn’t enough to set off alarm bells, there’s Hugo's immediately suspicious associate Mr M, a robot with the voice of Stephen Root (who very comfortably fits in with the show’s rhythms with a laidback but menacing cadence). The world is populated by a who’s who of voice actors, a mix of Adventure Time mainstays and newcomers, with Tom Kenny returning for background voices, as well as Anthony and Ashly Burch, even Dee Bradley Baker (maybe best known for the voices of Appa and Momo in Avatar: The Last Airbender). Despite all the new faces, they easily settle into the show’s trademark offbeat, occasionally dark humor (“You single-handedly saved everyone!” Y5 exclaims to BMO shortly before a cut to a single man who got spaced).

As for BMO themselves, it’s perhaps a strange choice to have a traditionally comic-relief sidekick lead the long-awaited return of such a beloved show, but if anything, the episode serves as a showcase for BMO’s worth. Their contradictory concern for everybody and self-centeredness (they refer to Earth as “BMO World” and has forgotten longtime roommate Finn's name more than once, most amusingly calling him "Phil") has always been amusingly compelling, and with the expanded episode time and fresh location, we get to see how other unfamiliar characters react to their silly demeanor. And though Finn and Jake are more proven in heroics, The Drift specifically needed BMO. As clumsy and weird as they are, BMO has always been the hero of their own story, and the value of that seemingly blind self-confidence truly gets to shine in a situation where everyone has left their lives in the hands of someone they consider their better.

It also helps that the episode is so precisely storyboarded, as Hanna K Nyström, Iggy Craig, Laura Knetzger, Anna Syvertsson, and the series’s original showrunner Adam Muto all comfortably slip back into the show’s odd but dynamic rhythms. Every scene has multiple, delightful touches of the absurd -- such as a giant bird selling its own eggs at a flea market (“...Or I swear to god I’ll eat them!”) or another little robot singing the Frasier theme song while digging through a giant scrap heap. Speaking of music, all of the above is characterized by a charming and appropriately video-gamey electronic score from composer Tim Kiefer, plus the one original song that opens the piece.

Adventure Time was always one of Cartoon Network's most visually accomplished shows, even moreso as the series went on, and it’s no different here, its mix of surreal, cosmic, and trippy, post-post-apocalyptic landscapes are just as compelling as when the show was still airing. The shades of pastel in its alien vegetation and the mix of cute and gross creature design, the space-age technology and wild west town, all effortlessly fit together. It’s not just pretty, either, as the use of those familiar pastel tones appears to represent the life that later drains from the area as it dies. The death of the planet is something that has long loomed over Adventure Time, but this might be the most direct connection the show has made between that death, and what role corporations play in it, in this case, wealth acting as a shield from The End, everyone else be damned.

Muto and co. make the smart decision to make the episodes events revolve around BMO’s appearance in this new world, but not necessarily make it about them -- we already know BMO, and BMO won’t change. But their appearance changes Y5 almost immediately, from their self-determined name to their growing resistance to her constant orders from her cold and overly pragmatic parents, and, eventually, the very idea of Hugo’s company town. The special sneaks its lesson in well, warning to distrust the privilege of the rich (amongst the people of The Drift, HugoCorp Gold Members are living the sweet life) and attempting to inspire the self-confidence and self-belief that would drive one to stand up to such people.

Y5 learns not just how to stand up for herself and be a hero, but realizes that the individualism of the station is effectively killing it, her journey towards questioning this rule of law pushed on by BMO’s innate curiosity. It’s simply touching to see Y5’s previously demure, submissive attitude change in the face of BMO’s unending enthusiasm, and in that, the original appeal of Adventure Time is realized again, even in this new landscape. It all feels perfectly balanced, between the show’s numerous anachronisms and swings between earnestness and comedy both dark and irreverent. Though Finn and Jake aren’t here yet and the episode might not meet with the original show’s highest points, it’s a more than welcome return.

Kambole Campbell is a contributor to Thrillist.