Alec Baldwin's Trump Returns to 'SNL' to Plan His Presidency 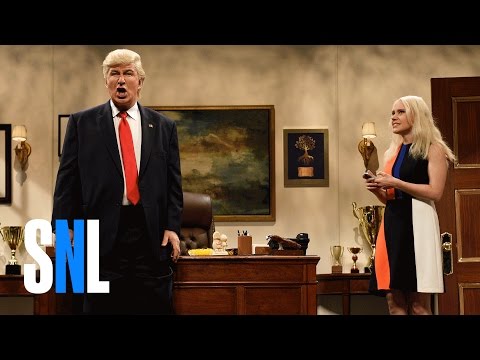 After guest-host Dave Chappelle's measured stand-up set on the subject of President Donald Trump last week, for the first time since Trump's election victory, Saturday Night Live brought back Alec Baldwin's impression of our nation's next leader. Looks like Baldwin won't be getting his weekends back anytime soon, then.

In the cold-open for last night's episode, hosted by former cast member Kristen Wiig, Baldwin's Trump was joined by Kate McKinnon's Kellyanne Conway to process the results of his win, and got congratulatory visits from Mitt Romney (Jason Sudeikis) and Mike Pence (Beck Bennett), who addressed his fateful trip to Hamilton the night before.

Certainly, watching Baldwin's Trump ask Siri "What is ISIS?" and beg VP Pence to do his job for him takes on a different weight post-election -- but if there's anyone who can help us process the government's pending administration, it's Pete Schweddy.

Lauren Leibowitz is an editor for Thrillist Entertainment. Follow her on Twitter @lleibowitzz.
Thrillist TV
History of
The History of the McRib