Amazon's Superhero Series 'Invincible' Does Not Mess Around

Beware of its colorful exterior—'Invincible,' from the creator of 'The Walking Dead,' is seriously dark.

While audiences wait for the return of the extremely violent next season of The Boys, Amazon has a new superhero show that's heavy on gore and family drama. Invincible, the full first season of which dropped on Friday, adapts the popular comic series of the same name by The Walking Dead author Robert Kirkman, which asks: What if Spider-Man came out today, and it was very violent? The result is a fun yet dark show about the cost of being a teenage superhero.

Invincible is not what it seems at first. Its world is cheerful like a classic Marvel comic, and it's presented in bright and colorful animation by Skybound Entertainment, Kirkman's production company that works on comics, video games, and TV, but there's an edge to it that resembles the nihilistic world of The Boys. Steven Yeun voices Mark Grayson, your average teenager. He lives at home with his mom, Debbie (Sandra Oh), and his dad—Nolan, aka Omni-Man (J.K. Simmons), the show's answer to Superman—spends too much time at his mysterious job to really pay him attention. Mark gets bullied at school, and he's a fan of superheroes, who are very much real in this world and have comics, video games, you name it, inspired in their name. Invincible even starts out as a typical superhero origin story, with Mark acquiring his powers, which basically make him invincible like his dad, learning from his dad on how to use them, and trying to keep his superhero life separate from his home life. If only it were so easy. 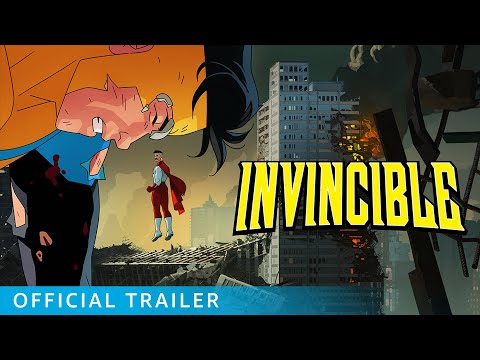 The three episodes available for press do a great job in making Mark feel like a relatable teenage kid who just happens to have superpowers. Like Peter Parker or Billy Batson, Mark struggles to balance his newfound powers with his regular life, like when he has to find excuses to leave a date to go save Mount Rushmore from a crazy scientist. What makes Mark different, however, is that he's also the son of the most famous and powerful hero on the planet, so he has an added layer of responsibility and pressure to follow in his footsteps and meet impossibly high expectations. Because the first episode spends time showing us how big a fan of superheroes Mark is, we believe his excitement at the idea of going out and fighting bad guys, even if it means he recklessly throws himself head-first into a battle against an army of intergalactic warriors without thinking things through.

What makes Invincible instantly stand out is the way it takes a familiar superhero story heavily inspired by the tone of early Stan Lee/Steve Ditko Spider-Man, while adding a penchant for gore and grim darkness that we've grown used to in modern superhero stories that challenge the notion that superheroes are only bright and colorful. (Zack Snyder's Justice League makes a similar recent case.) When Mark rushes in to fight the aliens, he quickly realizes that even if he can deflect laser beams because of his powers, innocent bystanders aren't so lucky, and they get instantly eviscerated by an alien warrior trying to kill Mark. Though the show can be interpreted as falling into the same hole as other superhero shows like The Boys or Harley Quinn in how they glorify the violence they're preaching against, Invincible mostly avoids this by staying focused on Mark's horrified reactions in discovering that his actions have consequences, and those consequences are far bloodier and permanent than he ever thought they'd be. Sure, heroes are glamorized and the idea of a superhero team sounds great, but the moment the fight begins, the show makes it clear that violence has repercussions. Punching a villain can give them a concussion, throwing a car against them will crush and kill them, and there is no going back.

Where The Boys tears down the idea of superheroes in general, and DC's animated Harley Quinn series makes fun of the entire concept and knocks its teeth out with a bat, Invincible embraces superheroics, but also grounds them in realism when it comes to the physical consequence of having powers. It's not too realistic that it takes the fun out of it, but just enough to make you think twice about cheering for The Hulk punching his way through a crowd.

This applies to the animation itself, too. The character designs look just like in the comic, while the static, limited animation resembles other superhero cartoons like Young Justice or the more recent DC animated films. This can feel a bit disappointing when compared to what recent animated shows, like Castlevania or even kid-friendly shows like The Legend of Korra, do with their fluid and dynamic sequences. Still, it's hard to compare this to Saturday morning cartoons when you see heroes crushed to bits in bloody fashion to remind you that this is a hard R-rated show.

Just like a modern superhero movie, Invincible boasts an impressive cast, which includes voice acting from the aforementioned J.K. Simmons and Sandra Oh, to Mark Hamill and Walton Goggins. In the first three episodes, the standout performance is given by Jason Mantzoukas, who plays a superpowered jerk named Rex Splode.

If you're tired of superhero movies or shows that promise lasting consequences but end up repeating a bunch of the same beats over and over, Invincible is the show for you. Even in its first three episodes, it's already clear that Mark's world has changed forever, and there's no putting it back the way it was. Despite its colorful exterior, there is a darkness at the core of the show that will only increase as the rest of the episodes play out, and Mark will have a long, hard road ahead if he wants to become a true hero. Just to be perfectly clear, it bears repeating that this being an animated show doesn't make it kid-friendly, or even a comedy. Invincible is more like the character drama of a CW show, the world-building of the entire MCU, and the violence of The Boys all wrapped up in an hour-long episodes of a superhero teen drama.

Mark's journey to becoming his own hero is just starting, and even if he goes through the same beats as someone like Peter Parker, the characters, relationships, and mix between cheerful and colorful animation and hyper-violence, make Invincible feel like a familiar yet fresh experience.

While we wait for the next season of The Boys to yell that superheroes are evil and no one should like them, Invincible does a great job arguing that there is room for a show that both embraces what makes superheroes fun, while still showing the repercussions of being able to punch through a steel wall.