The Terrifying Way 'AHS: Cult' Might Connect the 2016 Election to Killer Clowns

The seventh season of Ryan Murphy's landmark horror anthology looks poised to deliver on the chaotic creeps of earlier installments, with what seems like a more arch and darkly comic tone. The trailer, which dropped this week, re-confirms what we already know: the season will focus on the 2016 presidential election, take place in Michigan, and center on a clown cult. Sarah Paulson plays a woman undone by Donald Trump's win, and whose clown phobia is pushed to extremes by what is either a very lucid delusion or a very real blue-haired Evan Peters.

The Midwest setting is a new one for the show, and a clever play at election-themed drama. The results of the 2016 election were not officially called in Michigan until November 24, sixteen days after voting, with Trump winning  by the narrowest margin in the typically blue state's history. The race was so close that Green Party candidate Jill Stein requested a recount, but was denied by federal judge.

That's all fertile ground for a series built on the foundation of quintessentially American anxieties. Michigan is also, perhaps not coincidentally, closely associated with clowns: Its home to the Insane Clown Posse, a hip hop group whose members and followers dress as perversions of the friendly children's characters. ICP also founded and regularly performs at the Gathering of the Juggalos, an annual festival that began in Michigan, where masses of clown-faced fans gather in the name of… well, something, we imagine.

There's no indication that AHS: Cult will go to the Gathering, but there were other clown-related events in 2016 that could tie in with election season, Michigan, and a season that promises to prey on sanity and despair 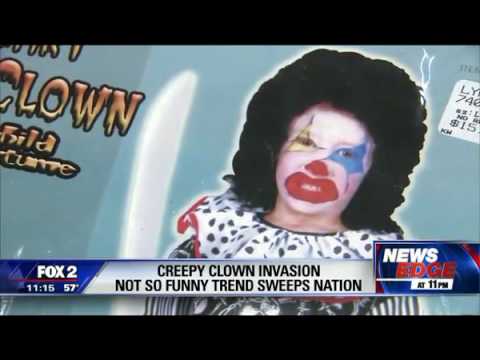 Creepy clown appearances were a legitimate phenomena in 2016, with eerie sightings reported in almost every U.S. state and across much of Canada. They began in August, with the first-known case reported by a young boy in Greenville, South Carolina, who told his mother that two clowns – one in a red wig, the other with a black star painted on his face – tried to lure him into the woods near their apartment complex.

Pretty soon, incidents of clowns – in woods, parks, parking lots, on the side of roads, at train stations, near schools – started popping up across the country. The cases were relatively benign in nature, but a few linked to kidnappings, robberies, and other crimes. Michigan had many notable clown sightings in 2016, including one walking up and down the M-79 highway, one emerging from the woods near a bus stop in Allegan County, and two cases in the Detroit suburb of Sterling Heights: one, where a young boy was approached by a clown who sliced his arm open with a sharp object, and another where two women were approached by three men dressed as clowns, one wielding a baseball bat. (AHS: Cult is rumored to also take place in a Detroit suburb.)

The uptick in clown sightings led many to wonder if there was something legitimately scary going on, if the many reports were the result of copycat pranksters, or if people only thought they were seeing clowns. Sociologist Robert Bartholomew told The Guardian that social media is responsible for the mass hysteria of the creepy clown, making the occurrences seem more recurring than they actually were.

Even so, clowns were still a large topic of conversation in 2016, and reported sightings eventually reached around the globe. Why clowns and why now?

"Urban legends and hysterias are always born out of the moment's societal fears," filmmaker and urban legend expert Josh Zeman told The Huffington Post last year, noting that the clowns may be a direct reference to the nation-wide fear of political change. Zeman explained that clowns are viewed as "agents of chaos," and that, "as society becomes more structured we need to find outlets for our 'evil.' And the clown serves as this outlet."

In an opinion piece for The Guardian, writer Mary Valle was even more direct in drawing a line between the clown hysteria and President Trump. "[His] dark undertow is pulling other killer clowns out of the shadows. Emboldened, they walk the streets, bearing the possibility that we, as a nation, may be stepping off a cliff of denial into a valley of hatred, fear and fascism."

That seems to go hand-in-hand with what we see of Evan Peters's character in the trailer. Emboldened by Trump's win, he jumps from his couch in celebration and mock-humps his television screen. Later, in a conversation with Billie Lourd – who looks to be indoctrinated into whatever ideology Peters is crafting – he says this notable line: "If you get people scared enough, they will set the world on fire." Will his character use the fear inflicted by Trump to prey on those made nervous by political upheaval?

Wherever it goes, clowns are a great fodder for American Horror Story, which – to varying degrees of success – loves to prey on stateside terror and tension. Past seasons have dabbled in school shootings, witch trials, mental illness, the persecution of the LGBT community, and a generalized fear of others. AHS: Cult will kill several birds with the same stone when it tackles hysteria, politics, and the chaos of change.