The powerful and surprising filmed version of the Broadway show that premiered at TIFF is now on HBO.

I'll admit that I went into Spike Lee's adaptation of David Byrne's American Utopia, the opening night film at this year's modified Toronto International Film Festival, with an emotional attachment. Seeing the show on Broadway in February was one of my Last Good Nights before the world—and live theater—came to a halt with the spread of coronavirus. My trip to the Hudson Theatre now feels like it took place in another universe, and for a brief moment Lee's document of the production brought me back to that place, one where I could sit next to my parents, without face masks, and dance to "Burning Down the House."

But Lee's film is also a cinematic marvel, a tribute to that other famous concert documentary starring David Byrne, Jonathan Demme's Stop Making Sense, and so much more. On one hand, American Utopia, which premieres on HBO and HBO Max October 17, is a tour through Byrne's discography, featuring selections from his work with the Talking Heads, Brian Eno, and more. Byrne plays the hits, including "Once in a Lifetime" and "This Must Be the Place," but this is not simply nostalgia for nostalgia's sake. It's also Byrne's typically askew dissertation on the state of the country.

He quotes James Baldwin and Dada artist Kurt Schwitters. He talks about registering people to vote in 2016. At times, it seems a bit earnest, like your kindly hip uncle encouraging you to exercise your civic duty. But his spoken word interludes, for as corny as they may be in isolation, are both supported and justified by the magic of the performance that follows. 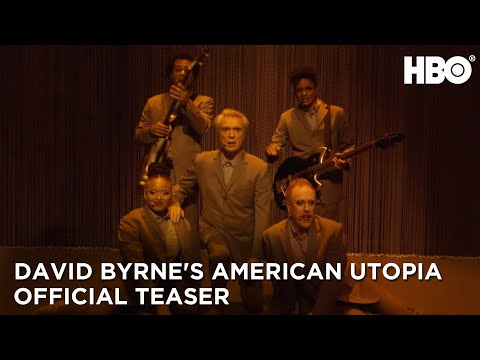 American Utopia plays differently in September than it did for me on stage back at the start of the year. In this time of social distancing, I'm now struck by how it is, more than anything else, a testament to the human body and its power to make art be that through dance, voice, or music. Lee probes that, honing in on the intricate footwork choreographed by Annie-B Parson and the way faces contort while singing. His cameras, placed all around the stage, play a part in the movement, too. During "Blind," in which the band is echoed by large shadows of themselves cultivated by lighting designer Rob Sinclair, Lee creates an optical illusion of the stage shifting under their feet.

Lee also adds depth to Byrne's more explicit acts of protest. As the cast members take a knee in the middle of "I Should Watch TV," a track by Byrne and St. Vincent about trying to understand the world through a screen, a projection of Colin Kaepernick appears behind them. When they shout out the names of the victims of racial violence in the cover of Janelle Monáe's "Hell You Talmbout," Lee cuts to poster-board portraits of Sandra Bland, Eric Garner, and others killed or injured by the police in America. At the conclusion of the song, he updates it with images of Ahmaud Arbery, Breonna Taylor, and George Floyd.

American Utopia is at turns both somber and euphoric, both a celebratory, nostalgic artifact of the Before Times and a reminder that this country has always existed in a state between light and dark. It's fitting that Byrne and his merry band conclude on a rousing rendition of "Road to Nowhere," a song full of these paradoxes. All we can do is just skip into an unknown future with the hope it will be better.