The 'Schitt's Creek' star is not even a little bit Alexis in her new role on the genre-bending sitcom/drama.

For six years, Emmy-winner Annie Murphy wore dresses from trendy brands like Isabel Marant, Helmut Lang, and Reformation to play Alexis Rose, the endlessly stylish displaced rich girl with an iconic theme song, "A Little Bit Alexis," on Schitt's Creek. That is not at all the case on her new series Kevin Can F**k Himself, which premiered on AMC's streaming service this past weekend before it hits the linear network June 20.

"Every time I was with the wonderful woman who did wardrobe for the show, we knew that the fitting was going well if we both looked at me in the mirror and we went, 'Oh no,'" she says. "Every time we felt depressed and upset and a little bit injured by what we were seeing in the mirror, we knew we were on the right track."

On the genre-bending Kevin Can F**k Himself, created by Valerie Armstrong, Murphy plays Allison McRoberts, the long-suffering wife of the titular Kevin (Eric Petersen), a schlub in Worcester, Massachusetts who would rather get into hijinks with his buddy than pay a single lick of attention to anything his spouse has to do or say. The series operates half as a three-camera sitcom in the vein of Kevin Can Wait or According to Jim where Allison has to put up with Kevin's nonsense and gets hit in the face with chili and watches as her favorite coffee table gets broken. But when Allison exits the scene, she just doesn't disappear into soundstage limbo. Instead, she enters a drama that has the tenor of something like Breaking Bad. By the end of the pilot, she resolves to kill Kevin. 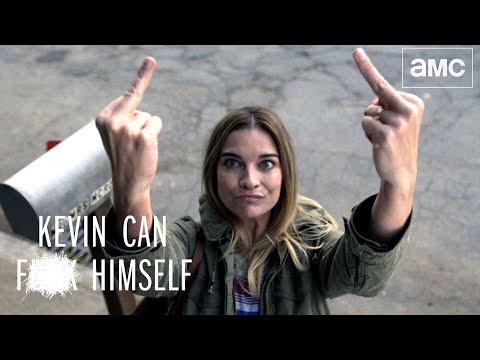 Murphy adopts the Worcester dialect and hunches her shoulders. Gone are Alexis' flicks of the wrist and her unmistakable vocal fry. Murphy's incredible ability to bring humanity to the broadest of comedy is still here, but it's employed in a vastly different way. That was her intention, to have her next move be something that stood in opposition to Alexis. And, well, to get another job.

Before Schitt's came along, Murphy was about to quit acting, reeling from a series of failures. After, she just wanted to keep going in the industry. "Even though I've been working for six years, the lack of work before those six years was still kind of... that feeling was very fresh," Murphy says. But if she allowed herself to hope, she wanted to prove that she wasn't just Alexis. Allison, despite sharing the same first initial as the character that made her famous, was an "exciting departure."

In her years of auditioning, Murphy went out for plenty of parts that resemble the flattened version of Allison that exists in the sitcom world, the one that has no personality beyond scolding and teasing her husband. "[There were] so many characters that's like 'it's the girlfriend,'' Murphy remembers. "And you're like, 'OK, what's she all about? What's she like? What makes her tick?' And they're like, 'She's the girlfriend!'"

When Murphy and her co-star Mary Hollis Inboden—who plays Patty, a skeptic of Allison who turns into her confidant—were performing in the multi-camera scenes, they could relax the night before because they knew the pressure wasn't on them to perform. Those moments were all about the guys. "We could have wine the night before and not worry about it because that wasn't our world," she says. When it was time to enter the Allison-centric universe, the sets subtly changed. The furniture in the McRoberts' living room was pushed closer together, giving the environment a claustrophobic feeling. Suddenly there was no room to choreograph pratfalls, and the dingy split-level home felt oppressive.

To become Allison, Murphy also had to change the way she sounds. She describes herself as sort of a vocal chameleon, who will adopt the accent of whoever is close to her. That became a problem when she would assume Inboden's natural Arkansas drawl while she was supposed to be dropping her Rs in a Massachusetts style. "I really honestly do think there is a world in which all of us will be barred from Massachusetts for the rest of our lives," she says. But she worked with dialect coach Charlotte Fleck to make sure she was as prepared as possible.

Allison gave Murphy yet another chance to disappear into a character, which is what she relishes most. And while Kevin and Schitt's are miles away from one another tonally, they both use Murphy's talents to interrogate the archetypes that have long been a part of the sitcom format. Just as Allison is far more than the "wife," Alexis was deeper than the ditz she initially appeared to be.

Murphy will be seen out of Allison's depressing duds soon enough. Her next role is opposite Natasha Lyonne in the second season of Russian Doll. "When I had a phone call with Amy Poehler and Natasha Lyonne, I had to go breathe heavily into a plastic bag for a while," she says. But she comes back to just how happy she was to be getting jobs. "I felt like a real working woman. I went from one project directly onto another project and that had never happened to me before."

She was glad to get back into something fashionable for Russian Doll's East Village party scene, though. "It was like, 'Oh she's alive.' That's what a face full of makeup looks like."