Why Black Justin Bieber on 'Atlanta' Was So Damn Funny

Justin Bieber is an easy target. From the Lonely Island's affectionate skewering of his bad boy antics in the under-seen Popstar: Never Stop Never Stopping to Kate McKinnon's dead-eyed impression of his Calvin Klein ads on SNL to South Park's brutal Bieber death-by-tentacle-monster back in 2010, the punch-line-ready singer has been mocked by comedians ever since he first crooned his way into America's heart as a young Canadian moppet. Last year, he even submitted to his own Comedy Central Roast. In 2016, it's hard to make an original joke about Justin Bieber.

So, I greeted "Nobody Beats the Biebs," the fifth episode of Donald Glover's FX series Atlanta, with a little skepticism. When it comes to the drop-crotch-pants-loving, blond-dreadlocks-sporting scamp, what's left to say? You'd think it's all been done. Over four episodes, Glover and his writers locked us in a shack with Migos, put us in a pizza delivery car with Bankroll PJ, and dropped us off at a quasi-mystical chicken joint, a far cry from an "Entourage for rappers" music-biz satire. The show documents a local music scene from the margins. A pop sensation like Bieber should have no place.

But great sitcoms are elastic, and tonight's Atlanta features an appearance from "Justin Bieber" that's sure to provoke some hilarious reactions. This isn't yet another self-deprecating celebrity cameo on a basic cable sitcom. Instead, Bieber is played by a young black actor (the very funny Austin Crute, who also records his own music). The racial flip is never explicitly acknowledged in the dialogue of the episode, giving the many Bieber jokes a surreal, quietly political, and also just plain funny quality. It's just a fact: in the universe of Atlanta, Justin Bieber is black.

Like the Bieber that exists in the real world, Atlanta's version of Bieber can be polarizing: Paper Boi can't stand him but Earn thinks he's worth cozying up to and possibly collaborating with. Much like the real Bieber, Atlanta's alternate universe version can be... obnoxious. He even pees in weird locations. By the episode's end, the fictional Bieber is stuck in another embarrassing public situation -- fighting Paper Boi in the middle of a charity basketball game -- but, like the real Bieber, he sweet-talks his way out of trouble by singing a corny tropical-house ballad. "I'm not a bad guy," he says. "I actually love Christ."

Unlike the somewhat controversial "color-blind" re-casting of Louis C.K.'s wife on Louie, the casting of Atlanta's Bieber feels pointed, wry, and purposeful. (Apparently, Ray Donovan has also explored the "Black Justin Bieber" question.) For Glover's series, the casting decision poses a series of implied questions: What if Justin Bieber, a musician who achieved mainstream success with a string of importantco-signs from popular black artists, were black? Would you view him differently? Would he have achieved the same level of success? Would he be given so many shots at redemption by the public? The episode resists the temptation to turn its Justin Bieber plot into an easily digestible, hashtag-ready political point. It's more interested in moments of ambiguity. 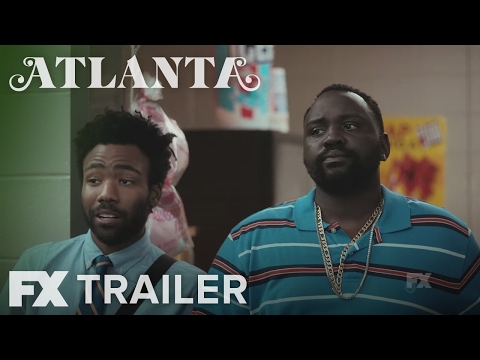 This isn't the first time Glover got philosophical about the Biebs. Back in 2011, when performing a stand-up set, the touring Community actor riffed on Bieber's documentary Never Say Never, questioning the validity of a title card in the trailer that says, "They said it would never happen." "Who the fuck is they?" asked Glover onstage. "Who the fuck saw a baby playing the drums and was like, 'Oh, that will never work out. Good-looking talented white kids? People hate those. Never works out. Justin Timberlake. All the presidents except for one. Never works out.'"

Clearly, the question of Bieber and race has been on his mind for a while, but what's so impressive about "Nobody Beats the Biebs," which was penned by Glover's brother Stephen, is that it frames a provocative premise in such an efficient, smooth, and almost old-fashioned sitcom package. From a structural standpoint, the plotting resembles a strong episode of 30 Rock, a show Glover used to write for. In its story about Earn getting mistaken for a high-powered agent and its brief C-plot, which found Keith Stanfield's Darius getting in an argument about shooting a drawing of a dog at a gun range, the show resists the urge to hit its broader social points too hard. Instead, it lets questions simmer, like a smart friend relaxing after a couple beers. What if Justin Bieber were black? Isn't it weird that people use drawings of humans for targets at gun ranges? What if your identity is totally made up?

"The No. 1 thing we kept coming back to is that it needs to be funny first and foremost," said Glover in an interview with New York Magazine back in August. "I never wanted this shit to be important. I never wanted this show to be about diversity; all that shit is wack to me." More than any other episode, "Nobody Beats the Biebs" shows the benefit of that approach. It's not that Atlanta doesn't have "important" things to say. It just consistently chooses to say those things in its own idiosyncratic voice. Even when it comes to an easy target like Bieber, it chooses curiosity over condemnation.