Everything We Know About 'Atlanta' Season 3

In spring 2022, Donald Glover's FX series is finally coming back after a four-year hiatus.

"It's all about that paper, boy," raps fictional artist Paper Boi on his viral hit on Atlanta, the FX series created by Donald Glover. That lyric is always present in the story about Paper Boi, aka Alfred Miles (Brian Tyree Henry), and his cousin/manager Earn Marks (Glover) as they struggle to navigate the music industry. The show's network apparently also seems to stand by the verse, considering it ordered two additional seasons of the acclaimed comedy shortly after its first season, titled Atlanta Robbin' Season, aired.

The series, which debuted back in the fall of 2016 and returned with 11 new episodes in March 2018, has only grown in popularity during its lengthy hiatus, and the people want to know: When will we get to see more adventures involving Alfred, Earn, his on-again, off-again girlfriend Van (Zazie Beetz), and their pal Darius (played by the Oscar-nominated LaKeith Stanfield)? Before the COVID-19 pandemic hit, the delay was partially attributed to Glover's rising profile, which includes his Grammy-winning music career as Childish Gambino, roles in Disney franchises, and major TV production deals. Regardless, a lot more Atlanta is in the works, and here's what we know about the next two seasons so far.

When will Atlanta Season 3 be released?

We finally, finally know when we can expect more of Earn and Paper Boi's misadventures. FX announced that Season 3 will premiere on March 24, 2022. The show is gracing our screens again after four(!) long years, so get hyped and make sure to keep your Thursdays open this spring, as the show airs weekly. (It'll also be available to stream on Hulu.)

While we're thankful to be getting any Atlanta at all after such a long break, there's even more of the show coming soon. At a Television Critics Association's press tour in August 2021, FX Networks and FX Productions chairman John Landgraf said that Season 4 is already written and was in production throughout summer 2021. Although nothing is confirmed, we'll cross our fingers that it hits FX in late 2022 or early 2023.

Is there a trailer for Atlanta Season 3?

A couple weeks out from the premiere date, FX dropped the official full-length trailer. It shows Paper Boi, Earn, Darius, and Van living it up in Europe, as they join Paper Boi on his tour with Clark County. Although the landscape is pretty different from ATL, it looks like some of the crew is trying to make the most of the experience, with Darius even saying, "This city is my Jesus," about Amsterdam. As usual, though, it looks like Earn isn't leaning into any of the debauchery and not in the mood to put up with any bullshit—at one point in the clip asking Paper Boi if he cares what "the streets" will think of him while they're shopping for designer fashions. This is Atlanta, though, so obviously expect some things to go awry, with the trailer previewing wellness retreats and dispensaries that are probably nothing like what they seem. Fasten your seatbelt and get ready for what looks like a wild European ride.

Since it's been so long since Atlanta's been on air, FX has been keeping fans well fed with more than a few teaser trailers. One arrived with the announcement of the premiere date in late December 2021. Similar to the full-length trailer, the teaser shows shows Paper Boi and his crew traveling (and partying) across Europe on tour. We get shots of the whole gang in France, the Netherlands, and the U.K. as they rage, all while feeling like complete outsiders. As always with Atlanta, some biting sarcasm and surrealism is to be expected, as it looks like Paper Boi is on some sort of press junket about "ending racism by 2024."

That's not the only teaser out. One that's in line with the show's surrealism dropped in mid January 2022. Titled "Shillin'," the clip plays like a commercial in which Atlanta has sold out and slapped its title on everything from whipped cream to cleaning supplies. As dozens of white Europeans get ecstatic about the products in a cartoonish way and a cover of ATL legends Outkast's "So Fresh, So Clean" plays, Earn, Darius, Van, and Paper Boi couldn't look more annoyed. At the end, Paper Boi even says, "These products scare me," while it seems like he should be plugging them. It definitely speaks to how uncomfortable the crew is supposed to be as they're traveling abroad next season. 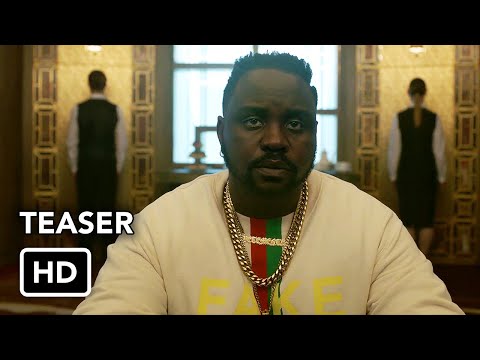 If all of those trailers aren't enough for you, there's also a third teaser. The above clip was the first to arrive in fall 2021, and it's cryptic as hell. Similar to the other trailers, it features shots of European cities and what looks like hotel rooms (many of which are trashed from the night before). It then offers a shot of Paper Boi sitting at a table in a Gucci sweatshirt with the word "Fake" printed on it, as servants wait behind him by facing the wall like he's an untouchable king. It's eerie enough as is, but soundtracked by Sun Ra's "It's After the End of the World," it's definitely a foreboding look ahead at the season.

How many episodes will there be in Atlanta Season 3?

Originally, Season 3 and and the already confirmed Season 4 were both guaranteed eight episodes, but (thankfully) that number was upped once the writers got back into the writer's room and fleshed things out. Deadline reports Season 3 will feature 10 installments and Season 4 is sticking with eight. It's right around the range the series is used to, with Season 1 featuring 10 episodes and 2 including 11. We'll take what we can get.

Who in the cast is returning for Atlanta Season 3?

Just about everybody in the core cast will be back. The show wouldn't be the same without Donald Glover as Earn, Brian Tyree Henry as Paper Boi, LaKeith Stanfield as Darius, and Zazie Beetz as Van. It would also make sense to see some more of RJ Walker, who plays Clark County, the rising rapper who Paper Boi was about to join on tour right at the end of Season 2. Matthew Barnes who plays Lucas, Clark County's manager vying to sign Paper Boi, could be back as well.

What will Season 3 of Atlanta be about?

As a social commentary on race and class masked as a show about a rising rapper that frequently experiments and veers off from its story episode to episode—including one of its bests—it's hard to say what exactly will happen in the upcoming seasons of Atlanta. One thing is for sure, though, which is it's likely to continue following the ceaseless struggle of Earn and Al trying to make it and failing miserably at both the hands of the music industry, systemic racism, and Earn's own poor decision making.

Specifically, we'll see that all play out on Paper Boi's first-ever tour, since Season 2 ended with him and Earn taking off on a flight to Europe with Clark County and it's been confirmed confirmed the show filmed Season 3 across Amsterdam, London, and Paris. Atlanta could also continue to get even darker going forward, now that we know the lengths Earn is willing to go to protect himself and Al. As you may recall, before the two were able to board their flight to travel across the world for tour in the Season 2 finale, Earn realized he still had his uncle's gun in his luggage and shoved it into Clark County's (RJ Walker) bag before they went through airport security. Earn was able to carry on as nothing happened, but Clark County's manager (Matthew Barnes) took the fall for it in order to protect his client. The moment spoke volumes, and that theme could continue to come back up as the two continue to navigate the industry and success.

Plus, more broadly, the showrunners explained that they hope to feature more women's stories going forward. Zazie Beetz's Van is a lead on the show, but only one episode thus far (the wonderful "Champagne Papi") wholly focused on her and her girlfriends. Expect more of that and other similar storylines in Season 3, though, because writer/producer Stephen Glover told THR the series has "some cool ideas … that'll put some more women on screen." He said, "There's a very specific perspective from the Atlanta woman that I think we're gonna explore in Season 3."

It's hard to say what that means right now, but we can at least get excited knowing it's supposed to exceed expectations. Donald Glover took to Twitter to give fans an update in November 2020, sharing the next installments are going to be "some of the best television ever made." He wrote, "Sopranos only ones who can touch us." We don't doubt him!

Is Season 4 the last season of Atlanta?

It's time to say goodbye to Alfred, Earn, Darius, and Van. In February 2022, The Hollywood Reporter shared that FX CEO John Landgraf had announced Season 4 of Atlanta would be the comedy's last installment. At this point—when it's been four years since the show has aired and each core cast member's career has taken off immensely—it should come as no surprise that the series is wrapping up. In the time since the show's most recent episodes, Donald Glover became attached to projects at Amazon Prime, including a Mr. and Mrs. Smith series; LaKeith Stanfield was nominated for an Oscar, and Brian Tyree Henry and Zazie Beetz have only continued to garner bigger and bigger roles in blockbuster projects like Joker.

As previously noted, Season 4 is already filmed. Its release should come shortly after Season 3. Knowing how Atlanta usually goes, we can only expect the show to close with a bang.