One of the most popular anime in the last decade has ditched its heroes for brand-new characters on the other side of the story.

It's been seven long years, but even after agonizing gaps between seasons and confusing changes in production studios, at last: We've come to the beginning of the end for Attack on Titan (which is simulcasting on Hulu). But how does the massively popular anime follow up a series of earth-shattering revelations about its world and the nature of the titular giant humanoid Titans in its final season? By throwing us right into the other side of the conflict that feels like an entirely different show.

For three seasons, Attack on Titan has been asking one question: "Who is the enemy?" With its Season 4 premiere, "The Other Side of the Sea," the series finally unveils its end game: The real villain is institutionalized bigotry, and how it creates an endless cycle of violence and pain. It accomplishes this by throwing us head-first into yet another conflict involving the nation of Marley and the Eldian people, focusing on an entirely new cast of characters, mostly Eldians, serving as troops for the Marleyan Empire in a battle to take down an important fort of the previously unseen Middle Eastern Alliance.

After Season 3 of Attack on Titan effectively answered the major question that drove the series—that the swarms of Titans roaming beyond city walls are actually people transformed into man-eating monsters sent by the enemy nation of Marley to keep the people of Paradis Island trapped and afraid—the final season hit the reset button and moved to an entirely new chapter that nevertheless connects to everything that came before it. Though we're just meeting soldiers Falco, Gabi, Udo, and Zofia, they're nearly as easy to connect to as Eren and his friends in the Survey Corps. Even if these kids are technically being raised to be the next antagonists to annihilate our heroes on Paradis Island, they are still kids just doing their best to live up to their brainwashing by centuries of anti-Eldian propaganda. 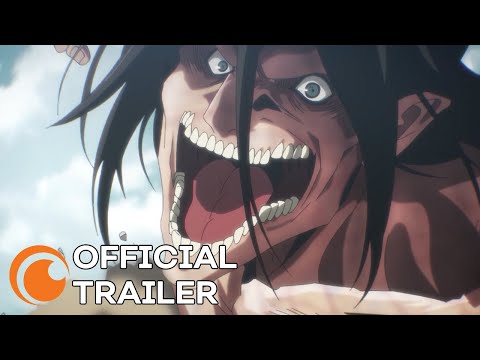 At three episodes in, this season is doing a fantastic job of portraying the consequences of institutionalized hatred by a nation afraid of a part of its population's power of transforming into Titans and nationalism-driven warfare that uses Eldian people as weapons to keep the rest of the world subservient to the Marleyan Empire. It doesn't matter that Gabi jumps straight into the line of fire to prove her worth as a soldier of Marley; the military officers still use a seemingly Eldian-only force on the front line, and take great pleasure in sending people to their death. In the second episode, Falco quickly recites a pledge of allegiance to Marley after someone dares doubt his loyalty to the Empire. Even when Falco shows mercy to a wounded enemy soldier and tries to help him, all he gets as a response is "don't touch me" and "I don't want to be tainted."

The first few episodes feel substantially different from what came before, but the DNA of the series we've followed for all these years is still there. A big concern going into this new season was the change in the creative team and production studio from Wit Studio to MAPPA, but it seems like fans have nothing to worry about. The character design style and animation is a little off, compared to previous seasons, but it's just enough to fit this new chapter in the story, and not so disruptive that you can't get used to with a few episodes. MAPPA not only captures the look of horror and shell-shock in characters as soon as they meet the titular Titans that's reminiscent of the very first season, but its use of CG animation is a vast improvement over the inconsistent 3D Titan models from previous seasons.

Speaking of Titans, it feels oddly comforting to see humans once again being completely defenseless against them in a battle that's over as soon as it begins. The horror of watching Titans dropping out of an airplane and the bloodshed resulting from them, annihilating the soldiers on the fort, are great ways of reminding the audience of how the show began, even if everything else about the central conflict of the show has changed drastically.

Indeed, not only is the enemy different, but the battlefield has changed too. As mighty as the power of the Titans is, the ease with which the Middle Eastern Alliance nearly kills both the Armored and Beast Titan with their fleet and armored cars hint at a different kind of conflict where Titans are simply expendable weapons in an arsenal. The second episode doubles down on this to both raise the stakes and also present an interesting connection between the two groups of Eldian characters. Udo gets angry that POWs will spread tales of the savagery of Titans and the world will simply blame it on the devil blood of Eldians, rather than see it as a casualty of warfare. There is even a sense that the kids are afraid Marley will simply eradicate all Eldians in the Empire if Titans stop being useful weapons of war, making Gabi, Falco, and Udo's story as much a fight for survival as what we saw Eren and company go through.

No matter how much things have changed, this show remains as exhilarating, terrifying, action-packed, and complex in its themes as ever. Attack on Titan has continually raised the stakes, becoming a much darker show, and this final season hints at perhaps the most exciting chapter the anime has given us.