The 9 Awesomest DIY Projects on the Internet

Frankenstein Factor: This carpool isn’t for bored co-workers -- it’s the fastest hot tub around, built into a 1969 Cadillac.
The DIY-entific Method: Canadians Phil Weicker and Duncan Forster didn’t just pour water into the Carpool Deville’s backseat; they had to reinforce the interior with steel, make a custom hot tub shell… you get the gist. It took 15 years and a significant amount of Kickstarter money to take their design to the Bonneville Salt Flats to prove it’s not just full of hot water. 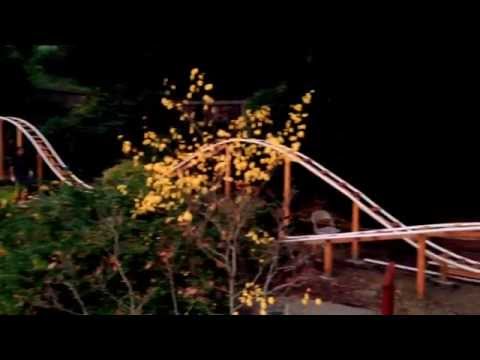 Frankenstein Factor: When Will Pemble’s kids asked him to build them a 180-feet-long, 10-feet-high roller coaster in their backyard, of course his immediate reaction was “… sure!” because what else would the Guinness Book of World Records' Best Dad (probably) say?
The DIY-entific Method: Pemble & Co. put together "The Caution Zone" with PVC pipes and fatherly devotion. It’s no 4G coaster but it definitely raises the bar for your average backyard bike ramp. And Pemble hasn’t stopped there: he constructs coasters in friends' backyards -- bringing joy to children, and chagrin to spouses, across California.

Frankenstein Factor: To solve the need for lightweight jockeys without, you know, mistreating children, camel racers across the Middle East opted for robots, in true practical DIY fashion.
The DIY-entific Method: After experimenting with bulky and expensive robots, racers realized they could jerry-rig their own 'bots using a drill, aluminum frame, and a little plastic whip. Oh, and a tiny jockey outfit, so the camel doesn't get freaked out by the fact it's being ridden by a robot overlord.

Frankenstein Factor: While some teenagers tinker with cars and wait for the bright, sunny day when they can hit the road, 18-year-old Justin Beckerman bypassed that noise entirely and built a fully submersible one-man submarine.
The DIY-entific Method: After putting together a duct-taped, plastic box prototype, Beckerman stepped up and invested $2,000 and six months in a machine that can descend 30ft underwater. The newest member of Beckerman’s fleet is called the Nautilus, and among its many moving parts is a skylight for a hatch, plastic piping for the body, three ballast tanks, and oh, only about 2,000 feet of wire. Check back with this kid in about five years for the first DIY manned spacecraft. Or just an even bigger submarine.

Frankenstein Factor: Few DIY projects are as gulp-inducing as a device designed to forcibly propel humans into the air.
The DIY-entific Method: This isn’t just a modern medieval torture device, it’s a system to chuck BASE jumpers more effectively off bridges (stop cringing, they wear parachutes). It also launches people into water for the best cannonballs EVER. Engineer Jason Bell’s 12-feet-long, 2,500-pound monster uses compressed air to fling jumpers 20 feet into the air. For jumpers, it’s surprisingly practical, and unsurprisingly, fun as hell. 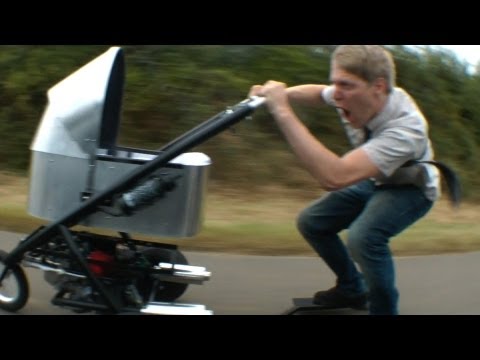 Frankenstein Factor: When British mad genius Colin Furze found out he was going to have a kid, he put AN ENGINE on a stroller and broke an actual Guinness World Record for fastest pram/stroller.
The DIY-entific Method: Furze built the brake and acceleration controls into the handle bar using upside-down mountain-bike gears, and attached a v-shaped trailer to the back. The first set of wheels he used for the trailer actually melted from the speed, but after some substitutions he settled on mobile scooter wheels to do the job, and did break that record. And don’t worry, he didn’t actually ride this thing with his kid in it… probably.

Frankenstein Factor: This is, in essence, a really big version of the magnifying glass you might have melted toys with as a kid.
The DIY-entific Method: Using a Fresnel lens (ridged to help focus the light) and a supportive wooden structure, Kevin Moore and Grant Reynolds managed to harness enough solar power to melt pennies and the aluminum off packaged popcorn. That means they were able to reach about 1220 degrees Fahrenheit. And also burn perfectly good popcorn.

Frankenstein Factor: Half DIY, half art installation, the Swimming Cities of Serenissima is an armada of houseboat mini-cities fording the rivers of the world. Created by many dedicated DIY-ers from Brooklyn’s underground art communiy, this fleet was kicked off in part by street artist Swoon, and her deep love for rafts constructed pretty much entirely out of upcycled materials.
The DIY-entific Method: Built with wood, foam, car parts, and -- trash, okay, it’s trash -- these rafts have successfully sailed the Mississippi, the Ganges, and the Hudson, among other rivers. They recently sort-of crashed the Venice Biennale, making them both the oddest and most punk rock boats since the pirate radio ships of the ‘60s.

Frankenstein Factor: Physics is not kind to the idea of man-powered aircrafts, but that didn't stop David Barford at the worryingly-named British competition, the Icarus Cup.
The DIY-entific Method: Careful and extremely precise planning factored into getting this project off the ground, perhaps more than any other DIY listed here. Fighting gravity with foam, tape, and balsa wood means that Barford had to give up superfluous things like safety belts, and also… clothes. But if you’re in good enough shape to force an aircraft off the ground with your muscles alone, your underwear is probably all you need.

As a loyal reader, your opinion is more important to us than oxygen, or hydrogen even. Please take this quick survey and tell us what you think!