There's a lot stuffed into the grimy walls of Bad Times at The El Royale, the ensemble crime drama starring Jeff Bridges and Dakota Johnson, among others. When I say that, I mean it quite literally: Early on in the narrative, the viewer discovers that the motel, which straddles the California-Nevada border, is bugged to high heavens and filled with occasionally lucrative secrets.

But this is a mystery that's not exactly a mystery. Director Drew Goddard -- who made the twisty horror delight The Cabin in the Woods -- gives his audience all the information he believes is required to grasp the essential points, even if that means there are some lingering questions.

Thrillist hopped on the phone with Goddard to pepper him with some of our lingering thoughts about what happened at the El Royale. 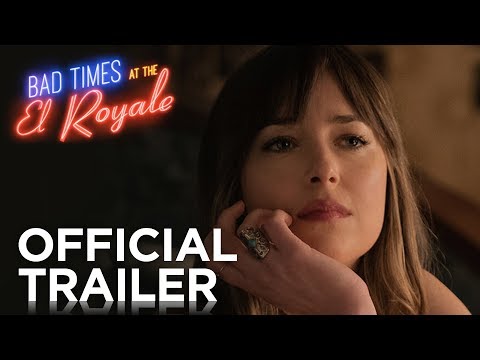 This is not the movie I was expecting. Where did this idea come from?
Drew Goddard: I've always loved crime fiction and crime cinema. It's been a genre I wanted to explore for a long time. I think I felt like I needed to reach a certain level of maturity before I tackled it because the danger when dealing with crime is you can get almost fetishtistic with it and become the very thing you are trying to criticize or critique. I think I needed to get a little older, quite honestly. I've always had in the back of my head the rough sketch of this idea. And then I reached a point around 2016 where it was time to put pen to paper, as they say.

You're exploring the 1960s. What was it about the era and these archetypes -- the cult leader, the girl group singer, the FBI man -- specifically?
Goddard: I suppose it was two things. For me, the '60s have always been intoxicating to study and immerse myself in. I love the juxtaposition of the chaos that happened politically. You saw this real time of turmoil. In a five-year period this country watched JFK, Martin Luther King, Bobby Kennedy all get assassinated, in some cases on live television. You actually saw it. And then Richard Nixon took over. Which is fairly insane to think about today, something like that happening. Simultaneously you have this renaissance of pop music. Almost this beautiful birth of pop music in a way. I don't think those two things are exclusive. I think this beautiful soul music came about because of the darkness these artists were experiencing. I've always loved that, and I thought that was fertile ground for story.

With regard to the characters, honestly it started less about the '60s and more about film noir archetypes at the beginning. I took classic figures you see in crime cinema. You've got the junkie, the detective, the grifter, the lounge singer. And just took them and decided now that we've seen the broad strokes of these people let's show them as actual human beings and really explore their humanity.

I was a fan of Cabin in the Woods going into this, and there's an element of taking archetypes and putting them in a mysterious location that is similar. But it doesn't go the same way. Another shoe doesn't drop. How did you want to approach the mystery, and what do you like about putting characters in these enclosed environments?
Goddard: Every film is different. Every film has its own world. Cabin had a very almost postmodern approach that felt appropriate for that film. In this case, I didn't want it to be a film that dealt with other films. Even though I used the archetypes, that was more just as a creative jumping-off point. I wanted to live in the world of the genre and pay the genre respect, but I didn't want to make it about the genre -- if that makes sense.

So the approach was a much more almost, for lack of a better word, classic approach. I wanted to really take my time and get to know these people as people, and let the camera find the empathy in these characters. That very much dictated how we built this, how we shot it how we performed it. I guess I love closed spaces because -- especially when you have nefarious people -- nefarious people in closed spaces always leads to drama. And as a writer, it's very fun to write. That must have started on my days at Buffy [the Vampire Slayer], because we would have our small sets and then we would throw vampires and murderers into these small spaces, and it just made the series come to life. I think that was deeply ingrained in me at the start.

How much of this movie is about religion for you?
Goddard: It's one of those things that as I was writing it, if you had asked me I would have said, 'What are you talking about? It's not about religion at all.' As the writer I go on instincts, and as I've gotten older I've certainly learned to trust that these things will come out organically, and I don't have to try to force them in there. In this particular case, about a month after finishing the script I really looked at it and went, 'Oh my god, I'm clearly exploring my Catholic childhood in this film. I'm clearly exploring the role religion played in my life as a child, and the role that spirituality plays in my life now.' And in asking those questions and exploring those issues, it was one of those things that is not conscious, but once I stepped back and looked at it, I was like, 'Oh, this is the heart of this film.' The spiritual questions that are evoked in the film. It did dictate so much of our approach as we were designing this film.

What would you have said when you were writing it?
Goddard: When I'm writing I very much focus on the characters. I really focus on who these people are. What they are doing, what they would say. So many of the twists and turns in the movie came about because I thought, 'What would this character actually do? What would this particular character actually do if somebody kicked in her door and hit her in the head. Would she do the normal cinematic thing? Or would she do the opposite?' Little things like that had huge plot ramifications, because I said, 'Let's just trust character and let them dictate the story.' So in the case of the spirituality, it was very much about Jeff Bridges' character Father Flynn. It was more about: Who is this man, what is he going through at this time. And as he was going through a spiritual awakening himself, the theme leapt forward through that.

I've seen speculation among critics that maybe the El Royale actually is purgatory. Do you want to respond to that? Is it?
Goddard: Look, I did not set out to make this a movie where there's lots of lingering genre questions. To be fair, we are dealing with very aggressive spiritual themes, and those themes are intentional. So I think the answer is there's a middle ground. I certainly did not mean it to specifically be, 'These people are ghosts. These people are in purgatory.' But it's fair to say I'm thinking of this in a much more operatic sense, for lack of a better word.

It doesn't offer a lot of specific answers. We don't really ever find out who the "owners" of the hotel who spy on people are. Do you have answers for that? Do you want there to be? Are there clues elsewhere in the film to look to?
Goddard: When I'm approaching it, I always try to have the answers in my head so that I understand the story. But so much of screenwriting and directing frankly is focusing on what's important to you. And to me, I wanted to tell the audience that some of these things are not actually important. They are questions because of the fabric of the film, but what is important is how the characters are reacting to them. What's important is how Darlene reacts to a film [of an unnamed celebrity in a compromising situation] being put in front of her. That to me is the soul of the film. It's about these seven people, and they are dealing with the world being mysterious around them. In that sense it was important to have the mystery of the world, but it was also important for them to say very quickly: Some of these things are not where I want the focus to be, some of these things actually can be chalked up to larger evils, and the ambiguity is important to me.

What do you mean by larger evils?
Goddard: There's a film strip that we leave ambiguous, for instance. I felt like the important part of the film strip is what Darlene says about it. What she says about it is, "Let me guess, it's a man who talks a lot." And for me it's more important to hear her say that than it is to hear who is on the film. Because what she's dealing with in her life is men who talk a lot to get their own way, and she is tired of it. I wanted to evoke that emotion much more than I wanted to tie up plot points.

Why did you want Darlene and Father Flynn to be your final girl and guy in this situation and end the movie with them looking at each other?
Goddard: It happened organically. When I was plotting the film I started with seven people, and thought, 'I'll see where the story wants to take me.' As I kept sort of thinking about the next scene and the next scene, Darlene kept stepping to the forefront. As I step back, the movie is very spiritual, and the spirituality comes in the form of art and the artist, and the act of singing and the act of creating art among difficult times. So it felt very organic to have her be the focus of the film. In order for her to finally get the appreciation that she deserved, we needed someone to appreciate her, we needed someone to say, 'Oh, I am actually going to appreciate you as you are finally.' That dovetailed very nicely with the priest who was finding his new faith.