In his Adult Swim anti-talk show, Eric Andre goes to extreme lengths to create as deranged a vibe as possible for his unsuspecting guests, both on set and in the streets of New York City. Even if a celebrity knows what they've signed up for, more or less, there's no way to predict that they'd be greeted by Andre transformed into a hairless, bronzed showman ("Like crispy, crispy brown rice," Andre told Thrillist while promoting Season 5 of The Eric Andre Show last year. "I used, like, every tanning approach available."), or that plastic cockroaches will rain down from the ceiling at any moment. Those streetside stumble across alleyways with Andre dangling from a third-story fire escape, (fake) shitting his shorts in front of a crowd of onlookers, because he was shooting stunts to get a Sprite sponsorship; even less fortunate New Yorkers will cross paths with a mostly naked Andre on rollerblades shouting about legalizing ranch.

Those who have followed The Eric Andre show—a scrappy, 11-minutes per episode production—know the folly of trying to estimate what'll happen next. Unlike some of the show's guests who, fed up, walk off stage in the middle of their interviews, fans are predisposed to Letting Go, getting swept up in the segments careening from one to the next, the perfect late-night treat for stoners and the irony brain-addled alike. Going into Netflix's hidden camera prank movie Bad Trip, helmed by the director of many of the shows episodes Kitao Sakurai and produced by Jackass's Jeff Tremaine, I nulled my expectations of what it'd "be" in preparation for a 90-minute version of The Eric Andre Show, only to be surprised yet again. Make no mistake: Bad Trip is stuffed with outrageous stunts, but, comparatively, feels pared back and grounded, mostly thanks to how these gags serve the overall narrative. 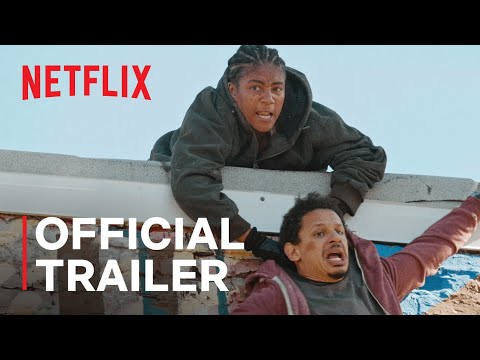 Bad Trip, which was filmed in the three years between Seasons 4 and 5 of The Eric Andre Show, is a buddy road trip movie: Chris Carey (Andre) convinces his best pal Bud Malone (Lil Rel Howery) to take the trip of a lifetime, driving from the ass-end of Florida to Manhattan in an attempt to win over Chris' unrequited high school love Maria (Michaela Conlin) after an offhand comment she made after a chance run-in at the smoothie shop Chris worked at as an abominable employee. Effectively stealing Bud sister Trina's (Tiffany Haddish) car—hot pink, "Bad Bitch" stickered on the back window—Chris and Bud crawl up the eastern seaboard, debating whether a White Chicks situation could really ever be pulled off, stopping in small-town restaurants, grocery stores, and bars to connect with locals. Meanwhile, Trina, who broke out of prison, is hot on their tail in a stolen cop car missing its driver's side door, and has her own bout of regular-people run-ins, interrogating people if they've seen the two men.

Where other prank movie fare like Borat, which exploits fish-out-of-water shock-and-awe to often expose peoples' ugliness, or Tim Heidecker's Mister America, where you can never quite tell which non-actors are really in on the gag, tends to thrive on secondhand embarrassment, Bad Trip doesn't go for the throat with mean-spirited gotchas. (Not to say that any approach here is most "correct.") Instead, the majority of random strangers—somehow, always the perfect candidate—are merely stopped for consultation or step in and break up conflict as good samaritans to ingeniously push the plot along. Many of the funniest bits come from someone being just a little too honest, in the case of a diner waitress who says 30 minutes is the right amount of time to wait before bringing up sex with Maria, or absolutely living for the drama, such as a woman eating in a restaurant approached by Haddish, Andre and Howery, and Haddish again.

By no means, though, is Bad Trip "small." Elaborate set pieces—staging a musical number in a mall food court, breaking into a gorilla habitat at a private zoo, car explosions, crashing a gala, etc.—designed to pull in nearby randos steamroll their way into the runtime, and the pinball effect of the big, shocking moments energize the more "ordinary" stops. It would be rude to ruin the end, but yes, Chris and Bud make it to New York to meet Maria and a final stunt with the trio puts a pin in the clever choreography of the entire movie. As the credits run, we're treated to the outtakes pulling the curtain back on the production for the hapless, all of who seem to relish the fact that they got got, a far cry away from the Jesus, thank god relief of learning that a bit shot for The Eric Andre Show is fake. (Maybe it's because New Yorkers are harder to faze when it comes to encountering the objectively strange that they pull out all the stops. Anyway.) Not all pranks need to involve projectile body fluids—though there is a good one in Bad Trip—to be funny to watch; sometimes the prankee just needs to have some fun, too.

Leanne Butkovic is an entertainment editor at Thrillist, on Twitter @leanbutk.