The director of 'Summer Wars' and 'Mirai' turns the 'Beauty and the Beast' story inside-out.

Mamoru Hosoda is the type of director whose new releases you pay attention to. His eye for detail and completely boundless imagination have created worlds and futures that are dreamlike in their colorful intensity and twisty internal logic, from the time-travel extravaganzas The Girl Who Leapt Through Time and Oscar-nominated Mirai, fabulist folktale Wolf Children, and the Neuromancer-esque digital battles of Summer Wars. His newest, Belle—a stunningly animated retelling of the "Beauty and the Beast" fairy tale with a virtual-reality twist—received a 14-minute standing ovation after its premiere at last year's Cannes film festival, and is finally in US theaters and IMAX starting this weekend.

Suzu Naito is a lonely schoolgirl in a small rural Japanese town, who hasn't sung since her mother died saving someone else when Suzu was a young girl. But inside the virtual world of U, Suzu goes by a beautiful and striking pink-haired alter ego she names Belle, and through Belle, Suzu is able to sing again. When her performance becomes a viral sensation, the world is obsessed with finding out who Belle could be in real life, but no one comes close. Things take a turn when Belle, during a performance, encounters the Dragon, a beastly figure that terrorizes the world of U and flees from the virtual police force bent on exposing his identity and banning him from the platform. But Suzu sees something different in the Dragon, a deeper pain that she also recognizes within herself, and tries to convince him to show her his true self. If you think by now you know where this story is going, you don't. 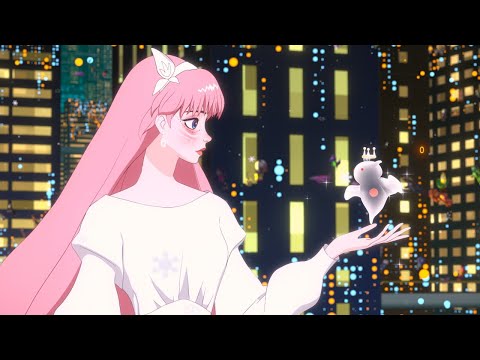 More than a fairy-tale retelling, Belle is also a fascinating exploration of how we move through the modern age's dual realities, the digital and the real. When a user logs on to U, their avatar is created using their own genetic information, the way our own digital selves include clues to who we are on the other side of the screen. As Belle, Suzu's freckles, otherwise an imperfection, become her trademark. The pain the Dragon feels in the real world shows up on his back in the form of technicolor bruises. There is an obsession with finding out the true identities of people on the internet, yet also a desire for them to keep up the mask, both a superpower and a defense mechanism.

It's also a musical, with the jaw-droppingly gorgeous animation necessary to compete with the movie's many booming pop earworms. The scenes that take place in Suzu's real life, where she obsesses over a handsome classmate and gets help from her bespectacled tech-savvy best friend, are animated by Studio Chizu, which Hosoda has worked with on his past four films, while the Western Disney-fied style of the world of U is partially the work of veteran Disney animator Jin Kim and Irish animation studio Cartoon Saloon, of The Secret of Kells and Wolfwalkers. It also boasts a fun group of voice actors: Hunter Schafer, Manny Jacinto, and Chace Crawford all lend their voices to the English dub.

This being a Hosoda project, you can never quite predict where the story is going to go, and though Belle treads familiar ground, its final twist—rather, a whole series of them—goes to places you'll never expect. Just as the movie introduces its own "metaverse," where, instead of VR Walmarts, there are singers throwing parades while riding on the back of a giant whale, its central love story explores new conceptions of what a love story can be. Instead of the endgame, love is the tool through which both characters move through their own traumas and save each other from giving in to despair.