The 25 Best 'Archer' Episodes of All Time

Eight years ago, Sterling Archer and his fellow ISIS (International Secret Intelligence Service) agents first free-fell onto the TV landscape. It's been a thrill to live in creator Adam Reed's brain, a complex space that deals in depraved behavior, humanizing revelations, and Bloody Mary prayers. Archer has had its ups and downs, but with a new 1940s noir-theme season premiering April 5 on FXX, we combed through all 85 episodes to present a top 25 that does the series justice. With Archer all on Netflix, we proudly declare these binge-worthy.

Archer and Lana take a trip to the Louisiana bayous to derail an eco-terrorist's plans. Along the way, they run into gators, airboats, and hurricanes (of the cocktail variety). Lana's mishap with dry ice is gold and solely because Archer thought it was necessary to pack a beer cooler.

Taking a break from core family values, "Double Indecency" pits the men against the women as a wealthy couple asks the two groups to seduce the other and figure out who's cheating on whom. This results in a series of bets of Cyril vs. Krieger and Cheryl vs. Pam, cascading into a full-blown bar fight that's full of elbow drops, roundhouse kicks, broken Champagne bottles, and a glammed-up Krieger "Shoo! Shoo! Shoo! Sha! Sha!"-ing his way around the room. 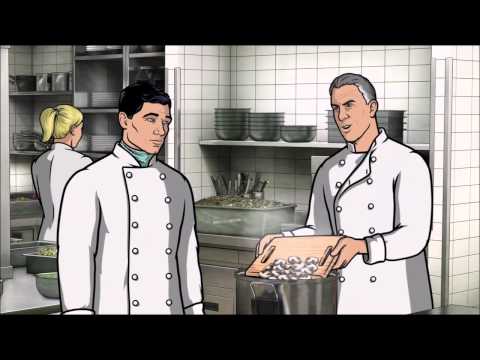 The ISIS crew go undercover in a celebrity chef's kitchen in an attempt to save an ambassador from being murdered. The kicker is chef Lance Casteau is voiced by Anthony Bourdain. His love for durians and ABBAB ("Always Be Berating and Belittling") is a welcome bonus.

Despite the episode's comedic inconsistencies and its inability to expand on Cyril's backstory -- he disappointed his father once by not being able to spell "onomatopoeia" at a spelling bee -- it has its fair share of laughs. This includes the introduction of Krieger's holographic girlfriend Mitsuko.

A season's worth of questions about Archer's real father leads to a season finale that underlines his flawed relationship with his mother. There are also nods to The Graduate and Full Metal Jacket, plus Lana and Pam's affair, which somehow involves former actor/wrestler/NFL-er Alex Karras.

Archer finds out actor Burt Reynolds is dating Malory and while being hunted by a Cuban hit squad, he decides to kidnap his childhood hero in an attempt to diffuse their romance. It’s a plot line that can be hard to follow if you haven’t seen White Lightning a thousand times, but it works well in the Archer universe. In fact, it spirals into a climactic car chase and a conversation about why you shouldn’t be traumatized by the thought of your mother having sex with someone.

If there's a universal fan-favorite, then it's Pam as this typical espionage storyline wraps itself around her secret affair with Archer, her poignant use of the term "chupacabra," and that one time she threw waffles at a stripper and yelled, "Woo! I’m Pacman Jones!"

The return of Conway Stern features two Hollywood-esque fight scenes and while one of them was thoroughly "Archerized," the double agent eventually does what he does best -- and that's double-cross someone. He figuratively (and literally) backstabs Archer (again) but loses another hand when trying to crack a joke about Lana's baby weight. It makes for an absurd callback episode, especially as the subplot involves Krieger using AJ to create a "Cyberneddly Teddly."

Spoiler: Archer is Bob Belcher. Double spoiler: He actually thinks he’s Bob Belcher. The season four premiere kicks off with Sterling being confronted by the KGB at Bob’s Burgers -- think David Cronenberg’s A History Of Violence -- and it never stops riffing on that other show as the quest to restore his memories is full of puns and Émile Gorgonzola burgers with J’accusecumbers.

Archer reunites with his former best friend Lucas Troy (Timothy Olyphant) and spends the entire episode slowly discovering that Troy has a "singular attraction" to him. His idiocy singlehandedly drives the episode but it's the smaller bits -- such as Troy's desire to run a bed and breakfast in Vermont and the Ent-inspired quote "What if I'm gay for Tolkien?" -- that really bring it home.

Archer and Lana attempt to extract an agent from Morocco only to find out their target, Kazak, is actually a giant English Mastiff (and a reference to Kurt Vonnegut’s novel The Sirens Of Titan). Hilarity ensues but it is all overshadowed by Archer’s startling realization that he might actually be in love with Lana and by Pam’s attempt to become a field agent via an office simulation.

The Season 1 highlight is an exaggerated spoof on the Hindenburg -- a German airship that exploded and caught fire during a landing procedure in 1937 -- but the nods to Walt Whitman, Indecent Proposal, Pam's dairy farm, and "the whole Oprah-Gayle thing" make it so much more. 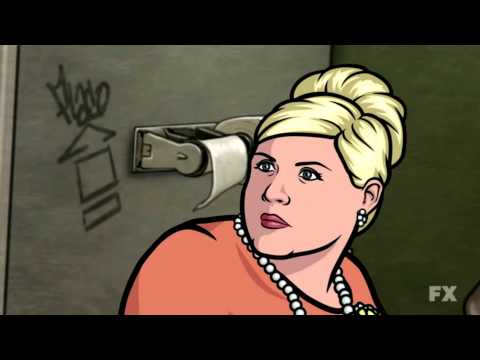 Despite its need for more Malory, "El Contador" runs with an ambitious spy mission-versus-office shenanigans premise and it pays off. Cyril goes on his first field mission and attempts to capture a drug lord in South America while Ray, Pam, and Cheryl try to bypass a drug test by doing the "Krieger Kleanse." The latter turns out to be an experiment gone wrong as it leads to a series of lucid hallucinations and Pam trying to "destroy the Decepticon" (aka Ray in his wheelchair).

It's the episode that provides some backstory to Woodhouse (Archer's butler) and explains what a tontine is (it's a joint financial agreement where participants contribute to a prize which is then awarded to the last remaining survivor). It's also a reminder that little old Woodhouse was once discharged for collecting a large number of enemy scalps, a la Brad Pitt in Legends of the Fall.

Archer's disappearance after the death of his fiancee, Katya Kazanova, leads him to a new life that involves tending a bar and bedding newlyweds on an island in French Polynesia. The only issue is he has no desire to leave -- even with some convincing from Malory's old confidant Rip Riley -- and so begins a trilogy of sorts that documents Sterling's brief reign as a pirate king.

Ray’s decision to get robot legs (via Krieger and a not-so-sober Pam) turns into Archer's quest to stop the operation by any means necessary. He succeeds at withdrawing an authorized RPG from the armory but he fails to get through Krieger's blast-proof door -- thus rupturing his own eardrums in the process while triggering Cheryl's fetish for physical (and emotional) violence. 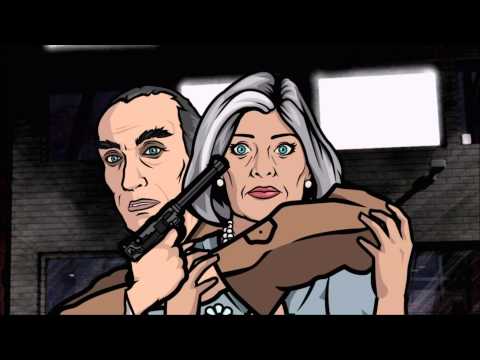 This episode takes the classic love triangle formula and throws it out the window, as Malory’s distaste for Archer and Lana turns into a series of unfortunate events. Cyril is promoted to be a field agent and through Sterling's training sessions, he accidentally poisons a prostitute and has to dispose of the body. Meanwhile, Lana is hell-bent on finding out why they are spending time together and Malory becomes temporarily blinded after having an allergic reaction to a zucchini.

"Swiss Miss" is  the codename for Anka Schlotz, the 16-year-old daughter of a German billionaire who turns out to be a nymphomaniac that's determined to have sexual relations with Archer. It's also the codename for an episode that's full of quotables like "gendarmes and dick stitches."

The crew is tasked with helping the Royal Canadian Mounted Police transport an imprisoned terrorist, but Archer spends most of his time trying to track down Cheryl's ocelot Babou. Thanks to the comedic genius of Adam Reed, the group's time with "radical Nova Scotian separatists" and responsible gun control laws ends with everyone being permanently banned from Canada.

Cheryl's big monologue from this episode is proof of Reed's knack for dialogue: "No no no no, like a big sweaty fireman carries you out of a burning building, lays you on the sidewalk, and you think, 'Yeah, OK. He's going to give me mouth-to-mouth.' Instead, he just starts choking the shit out of you, and the last sensation you feel before you die is that he's squeezing your throat so hard that a big wet blob of drool drips off his teeth and just, plurp, falls right onto your popped-out eyeball." 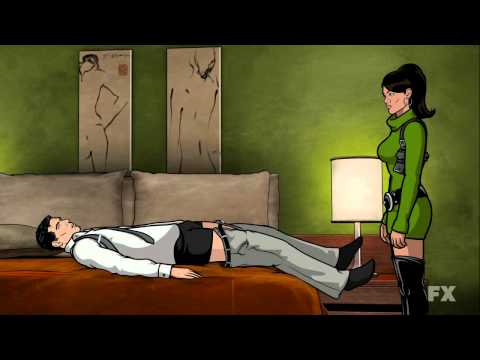 Six words: Archer gets diagnosed with breast cancer. It's stage II breast cancer, to be exact, and it's a trope that does its best to humanize Sterling even though he tries to convince Lana to have a one-night stand with him out of pity and eventually shows up to the hospital four hours late. His surgery is a success but only until the doctor informs him that he has the wrong results.

Two seasons in, it's revealed that Cheryl belongs to a wealthy railroad family which makes her the heiress to $500 million and a pet ocelot named Babou. But since this is Archer, kidnappers mistake Pam for Cheryl and Cyril kidnaps Cheryl to cover the $3,700 he lent her from his 401k. 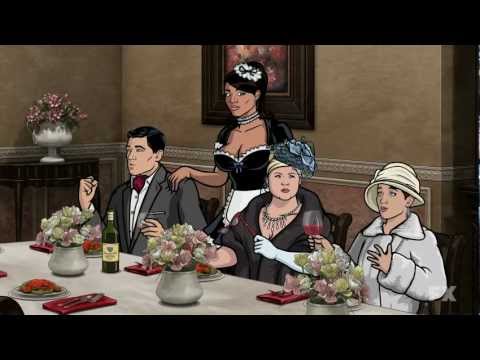 There's only one word needed to describe the best 21 minutes of Archer: "RAMPAAAAAGE." After Archer discovers the chemotherapy he's been taking for stage II breast cancer is counterfeit (he's actually been drinking Zima), he goes rogue to stop fake-drug traffickers. Eventually, our hero finds the real drugs and plugs himself into an IV. This doesn't stop the rampage.

Joshua Khan is a Toronto-based writer who embraces the turtleneck sweater and its potential as a tactical garment. Follow him and his personal endeavors over @blaremag.