The 10 Best 'Curb Your Enthusiasm' Episodes of All Time

There is Larry David, the writer-actor who, 17 years ago, jumped from behind the camera on Seinfeld to the spotlight of the groundbreaking Curb Your Enthusiasm, and then there's "LD," the self-described social assassin, the otherwise proclaimed bald, four-eyed fuck, the madman engine that keeps the improvised sitcom running. David's misanthropic alter ego has spent years questioning society’s unwritten and unspoken etiquette laws, never failing to get himself into trouble among his closest, insult-hurling friends and family. Both Larry Davids return this Sunday, when Curb ends a six-year hiatus with an unexpected ninth season. We are pretty, pretty... pretty good with that. 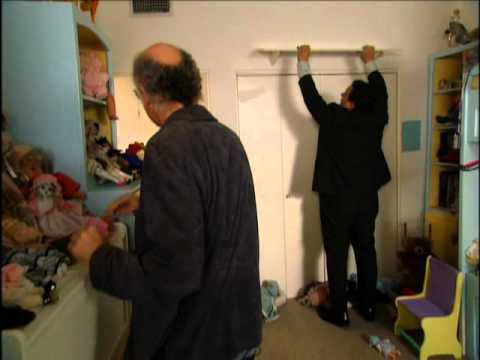 The art of Curb is the way David and his collaborators weave multiple plot segments together seamlessly into a climax. “The Doll” is a master class in the process. By the final moments, every dot -- from an uptight, self-proclaimed movie theater attendant, to an unlockable bathroom door, and finally to Larry’s obsession with drinking bottled water -- connects in one borderline-criminal meltdown. Plus, it boasts a quintessential Susie meltdown, superimposed with a Western-showdown score (which eventually becomes the music associated most with her character).
Best zinger: “Mommy, mommy, that bald man’s in the bathroom, and there’s something hard in his pants!” 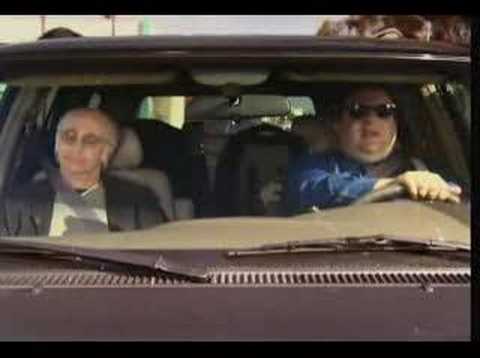 Larry runs into a multitude of problems throughout his stint as a restaurant investor in Season 3. The worst of it culminates just days before the restaurant is supposed to open, when Larry fires his chef after uncovering that, after arriving to the interview and appeasing Larry’s pro-bald sentimentalities, he's actually a toupee-donning liar. To top off an already foul, last-minute search, a vindictive food critic sabotages the crew with the suggestion of a French chef replacement, who not only refuses to cook salmon or allow a single caper into his kitchen, but suffers from Tourette syndrome, prone to sputtering bouts of profanities at any given moment. And, who would have guessed it, but the restaurant features an open kitchen -- it’s all classic Curb chaos, complete with a rare happy ending.
Best zinger: “Fuck you, you carwash cunt!” 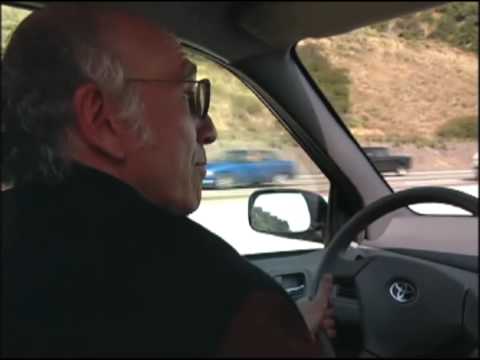 The genesis of most Curb comedy gold begins with Larry discovering how he can benefit from something that’s socially taboo. In “The Carpool Lane," Larry enlists a prostitute to ride along in the car en route to the Dodgers game so he can speed past traffic in the carpool lane. Monena (actress Kym Whitley) performs marvelously as the sly-talking, stiletto-wearing, popcorn-munching sex worker, riffling up Larry with her sheer outfit and talk of her profession. She even accompanies Larry later that evening at Nat David’s house, urged to smoke weed in an effort to ease Larry’s father’s glaucoma. As Nat and Monena teach each other respective Yiddish and Ebonics phrases, weed helps the elder David discover who she really is.
Best zinger:  “If you’re ever looking for a good blow job at a reasonable rate, she’s your gal.” 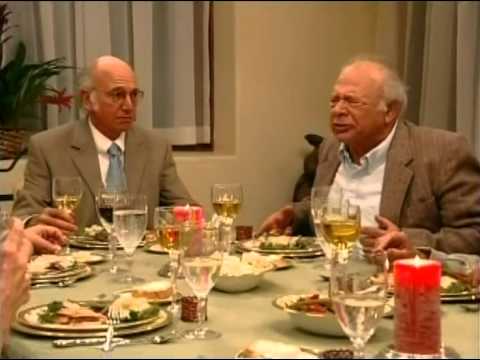 Curb employs Shakespearean tactics in the set up for “The Survivor,” which features a collision of two generations and Larry smack in the middle of a war between a Holocaust survivor and a contestant on the TV show Survivor. The thematic consistency of “surviving” pops up several times, showcasing Curb’s formidable talent of employing a single motif at various moments throughout the episode. All of which is elevated by Larry’s repeated inability to survive the episode without clean clothes, as he reappears over and over with wine and blood-drenched suits.
Best zinger: “Did you ever see our show? It was called the Holocaust!” 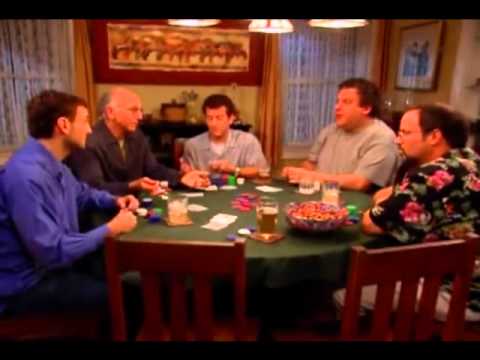 Even Larry's smallest quirks wind up offending someone -- he's simply insult prone. "Kamikaze Bingo" starts with Larry and Yoshi, a Japanese art dealer whose father resides in the same retirement home as Larry’s father, dining out. Larry suggests that Yoshi’s father, a former kamikaze pilot, shouldn’t be alive because a kamikaze pilot’s career was built around the inevitable suicide landing. What results is traditional Curb structure: Larry attempts to apologize to Yoshi, Yoshi rejects his apology, and in the end, during a game of bingo (which Larry believes is fixed) at the retirement home, Yoshi’s father, strapped to his wheelchair, takes revenge on Larry by charging straight at him.
Best zinger: "But at the last second what happened? Did he say, Jesus, this Kamikaze business may not be for me. Maaaaybe I'll go back to base!" 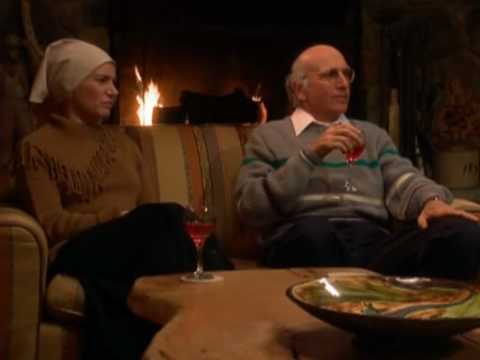 In order to bump Richard Lewis up on the kidney donor list (and save himself from having to donate his own kidney), Larry befriends the head of the organ donor board, who happens to be an Orthodox Jew. Larry invites him and his religious daughter Rachel for a weekend at Jeff and Susie’s ski lodge, under the facade that Larry too is Orthodox. Naturally, chaos ensues, and to keep up the ruse, Larry plays a yarmulke-doning, fake Yiddish groaning Jew who recruits Susie as his dutiful, shmata-wearing wife. Despite Larry’s overzealous attempts at making the weekend seem normal, Cheryl fries bacon in the morning, Susie makes Larry sleep on the floor after her refusal to share a bed with him, and ultimately he bungles the weekend’s initial goal by getting stuck on the ski lift alone with Rachel after dark, forcing her to jump into the snow below lest she be alone with a man after sunset. What sounds like a 1950s sitcom plot totally works on Curb.
Best Zinger: “My yarmulke almost fell off, I’m so taken aback.” 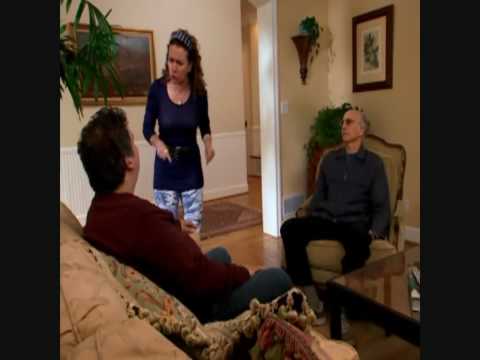 “The Anonymous Donor” gains its reputable status not only because of the introduction of Leon (J. B. Smoove) to the show, but because it documents his unforgettable mispronunciation of “ejaculate.” As Leon and Larry’s progression towards real friendship evolves, two major complaints ravage Larry's life. The first is his incomprehension of the unwritten law of the dry cleaners: if you receive something that’s not yours from the dry cleaners, it becomes yours (“you win some, you lose some”). The second centers around Ted Danson’s decision to not lend his name to the wing he donated -- choosing instead to implement “Wing Donated by Anonymous” -- whereas Larry’s wing boasts “Wing Donated by Larry David.” Among the many chaotic conflicts that play out, the running theme of anonymity and “who done it” (Ted’s selfless anonymity, Larry’s pressured anonymity, and the question of who stained the blanket and teddy bear) resonate and repeat.
Best zinger: “Nobody told me that I could be anonymous and tell people.” 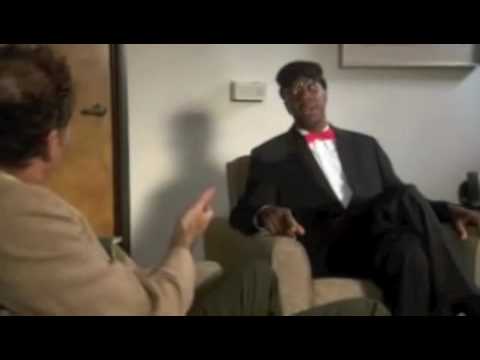 The penultimate episode of the Seinfeld reunion season brings the entire cast back together for a reading of the "reunion episode." Jokes are swung over Seinfeld’s disliked season finale, and with that a parity of Michael Richards’s real life n-word controversy. Leon wins the episode with his wacky portrayal of a black, Jewish accountant named Danny Duberstein -- a man who had actually died several months prior from the fictitious Groats disease -- who was recruited to mitigate Michael Richards’s own fear of Groats. But the most cringeworthy running joke is the cast’s constant referral to a staff member’s daughter’s rash as the “rash on her pussy,” a girl who also berates Larry with texts like, “Do you watch Wizards of Waverly Place?”
Best zinger: “No, no, no, no, you misunderstood, it’s once every thirteen years. You gotta recharge the Mitzvah!” 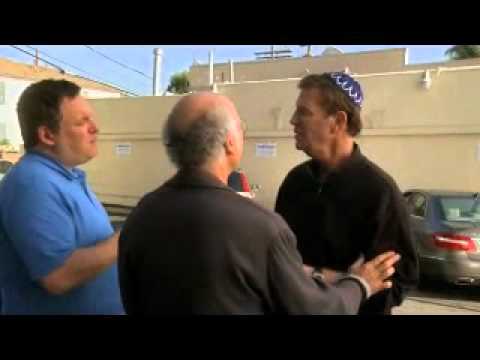 In this late-series classic, Larry is once again enlisted to perform his notorious role as a social assassin: first to convince a friend’s wife to stop saying “LOL,” and again when pressured and threatened by Sammy, to persuade Susie not to make a loud, obnoxious noise every time she takes a sip of a drink. He inevitably botches both, one which ends with Larry owing money, and the other which results in both a golf disaster and a major gossip spillage. The rest of the episode is spent focused on the juxtaposition of Larry and Jeff using chicken and their religion to mirror the Israeli-Palestinian conflict, coupled with the writers using humor as a parable to evoke peace in the Middle-East. It’s delightfully successful (and Alan Dershowitz actually sent the episode to the Israeli Prime Minister, hoping to encourage a screening of it between Netanyahu and the Palestinian President). Who would have thought that Larry and Jeff munching on Palestinian chicken could be a move towards peace in the Middle East?
Best zinger: “You know what it is? You’re always attracted to someone who doesn’t want you, right? Well, here you have somebody who not only doesn’t want you, doesn’t even acknowledge your right to exist, wants your destruction! That’s a turn-on.” 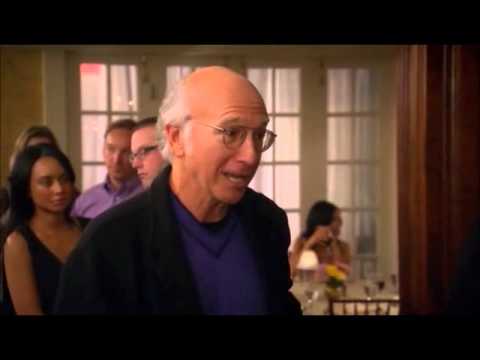 Only Larry, the master of lying, would get himself so tangled in an intricate web of lies (to get himself out of charity work, no less) that he would be forced to leave Los Angeles for New York. Yet despite Larry’s hilarious steady stream of lies, what “The Vow of Silence” is most remembered for is Larry’s introduction of the now colloquial Chat and Cut, first calling out a woman for manipulating a man she barely knows to cut the long line for the buffet, which ends up backfiring the next day when the line at Pinkberry accuses Larry of chatting and cutting to meet Jeff.
Best Zinger: “Why don’t you stay confined within the lines of not being an asshole, because you’re way over that line.”

Amy Schulman is an Editorial Assistant at Thrillist who’s feeling pretty, pretty good about the new season. Follow her on Instagram.