Ready your barf buckets. Drunk History, the most entertaining (and occasionally gross) history class, returns later this month with promises of more intoxicating lessons. Since its inception a decade ago, Jeremy Konner and Derek Waters' Emmy-winning web series-turned-TV hit has paired blasted comedian narrators with top-tier actors to recreate our country's most iconic moments, making for one of the smartest dumb shows in recent memory.

On deck for Season 5: the likes of Tiffany Haddish, Evan Rachel Wood, and Mandy Moore, for stories involving Rose Valland, Deborah Sampson, and Clara Barton. To catch up before Drunk History’s return, take a look at our favorite segments, all of which are available on YouTube and Hulu for your bingeing pleasure. 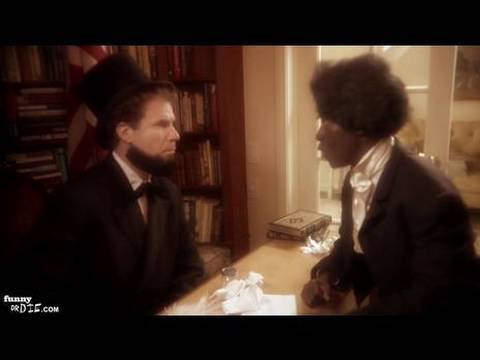 Web series, Vol. 5
Starring: Will Ferrell, Don Cheadle, Zooey Deschanel
The gist: It's already tough to have to break down the complex relationship between Frederick Douglass (Cheadle) and President Lincoln (Ferrell) in five minutes, but with two bottles of wine down the hatch? Comedian Jen Kirkman does her best, only making a few -- OK, several -- funny slip-ups along the way. This is revisionist history at its Dreyfuss.
Best line: "Did I need to do a more story about them?"
Watch the full segment here or above. 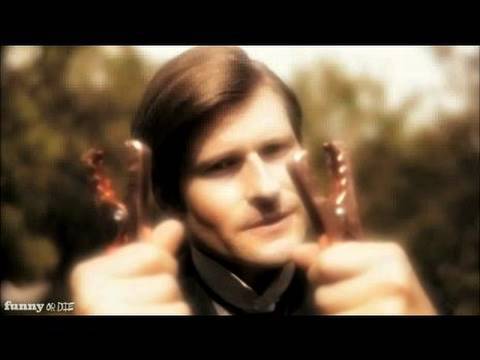 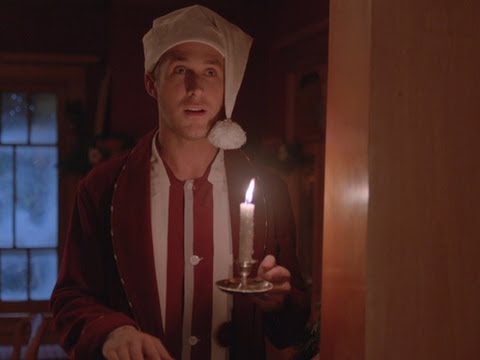 "'Twas the Night Before Christmas"

Web series, Vol. 7
Starring: Ryan Gosling, Jim Carrey, Eva Mendes
The gist: Though five-time narrator Allan McLeod has been a joy to watch during all his visits, his most memorable was easily his first, when he made this classic Christmas poem unintentionally dark. "All the stockings were hung by the chimney with care, in hopes that St. Nicholas soon would be there; the children were... hung?" he starts, amid a flurry of apologies. McLeod's the most self-conscious guest the show has ever had -- in the very, very best way -- and what follows is a slurring trainwreck that has Gosling and Carrey trying their hardest to keep up.
Best line: The gasp at the end.
Watch the full segment here or above.

Season 1, Episode 2
Starring: Ike Barinholtz
The gist: In 1886, labor activist August Spies (Barinholtz) led factory workers in a peaceful protest against unfair working conditions in Chicago. In 2013, Kyle Kinane fell off a chair and yell-vomited the story of the ensuing riots into a trash can. Arguably the most inebriated installment, thanks in large part to the... infectious nature of Kinane's enthusiasm, which has host Derek Waters quickly following suit.
Best line: "Let's not do this... and a lot of fancy words!"
Watch the full episode here. 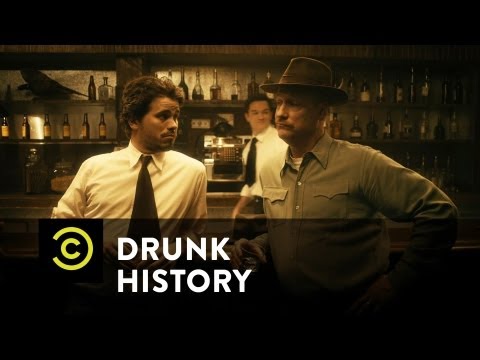 Season 1, Episode 3
Starring: Jason Ritter, Matt Walsh, Kevin Nealon
The gist: The idea of Stetson Kennedy (Ritter) infiltrating the Ku Klux Klan to befriend its leaders (Walsh, Nealon) and give the organization's childish secrets to the writers of a Superman radio show is already funny. (His trickery purportedly led to kids openly roasting the Klan, and according to narrator Mark Gagliardi, "made damn sure that the shit that the Klan was pulling was viewed by the people of the United States as worthy of ridicule and, in so many words, fucking stupid.") Add sneezing to the mix and you get peerless lip-synched magic.
Best line: "What'd I just put in my mouth? I like cantaloupe."
Watch the full episode here. 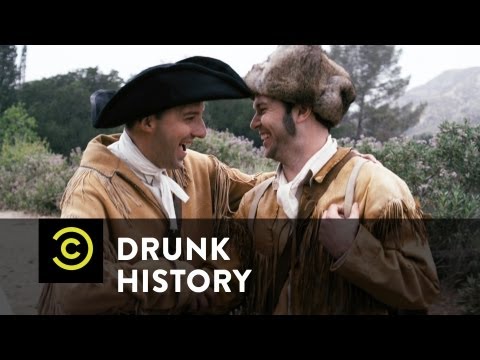 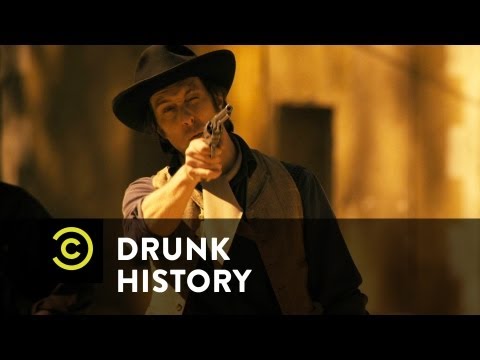 Season 1, Episode 8
Starring: Timm Sharp, Rob Huebel
The gist: As an adolescent, William McCarty (Sharp) stole cheese. Then he got arrested. Then he escaped. And then he basically spent the rest of his life stunning people with his impressive sharp-shooting, divine singing voice, and wonderfully lazy attempts at gunshot onomatopoeia. At least, that's what Preston Flagg would have you believe, in this surprisingly musical account of Billy the Kid.
Best line: "Is this bad? Me peeing? I'm peein'. OK, so, I'm peein'. Well... giddy up!"
Watch the full episode here. 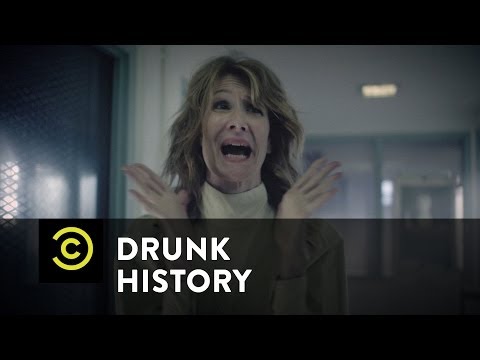 Season 2, Episode 2
Starring: Laura Dern, Matt Walsh
The gist: Dern is flat-out amazing as Nellie Bly, which should be news to nobody because it's Laura F. -- as in freakin' -- Dern. She'll inspire you as you learn about Bly's journalistic badassery, and she'll make you laugh when she randomly starts barking -- see, Dern probably would have been enough on her own, but then returning narrator JD Ryznar gets the bright idea to switch up the show's format, making this something truly special. On all fronts.
Best line: "You don't have the balls to get in the tub with me with a bathing suit, do you?"
Watch the full episode, which also includes a good Sybil Ludington segment, here. 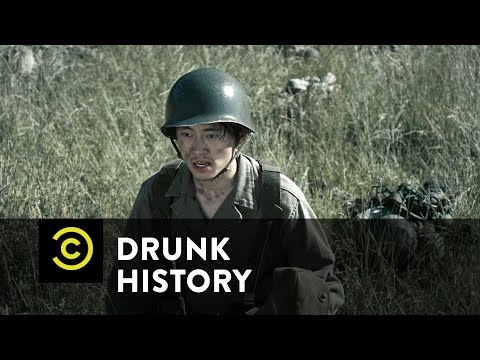 Season 2, Episode 7
Starring: Steven Yeun, James Hong
The gist: For the most part, Phil Hendrie's pretty put-together while recounting the heroics of World War II veteran-turned-senator Daniel Inouye (Yeun). There's still room for good goofs, but this one shines because, given the combo of the action and the radio comic's booming voice, it becomes one of the more epic reenactments. "It's like something out of a fucking movie," Hendrie says at one point. He's not wrong.
Best line: "Boom."
Watch the full episode, which includes Jason Mantzoukas as Eddie Aikau, here. 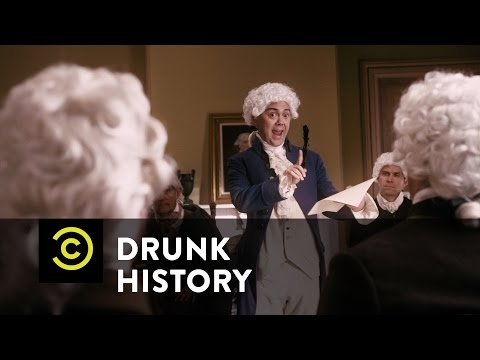 Season 2, Episode 8
Starring: Jerry O'Connell, Joe Lo Truglio
The gist: Patrick Walsh relishes explaining how Adams (Lo Truglio) and Jefferson (O'Connell) went from Founding Father BFFs to the equivalent of warring eighth graders, lobbing the most sophomoric of disses at each other during the election of 1800. The storytelling is effortlessly funny, thanks to how unbelievably ugly the candidates' campaigns get, but the real MVPs here are O'Connell and Lo Truglio, whose facial expressions never fail to disappoint. (OK, also, the spit. The spit is good, too.)
Best line: "I'm in the Splash Zone."
Watch the full episode, which includes an insane Nick Rutherford appearance, here. 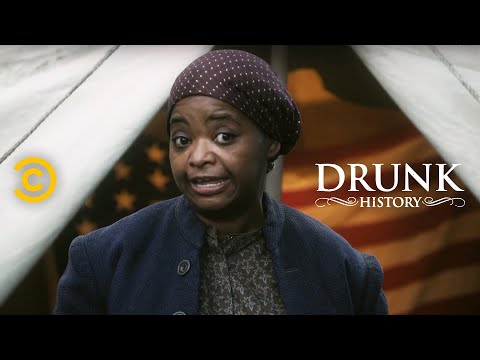 Season 3, Episode 4
Starring: Octavia Spencer
The gist: Yes, that Octavia Spencer. The Oscar winner follows Crissle West's words for what's best described as, Watch this right now.
Best line: "When the raid started, she knew where the mines and shit were in the water, so she and her team of mariners were able to be like, Aw, fuck that!Aw, fuck that! We're not gonna get caught by your stupid-ass traps, you slave-owners."
Watch the full episode here. 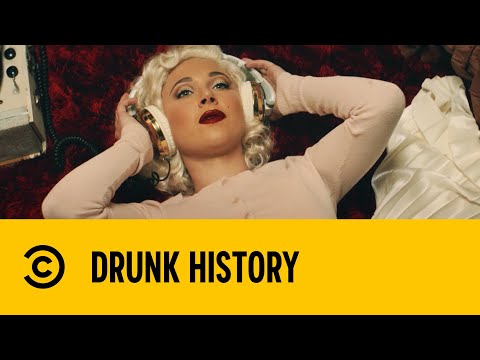 Season 4, Episode 2
Starring: Gabourey Sidibe, Juno Temple
The gist: When Fitzgerald (Sidibe) met Monroe (Temple), an unlikely career-boosting friendship formed -- the latter would help the jazz icon net a plum gig at the popular nightclub Mocambo. Here, we get a bite-size, enthusiastic breakdown of that story and its significance from Tymberlee Hill, prone to giggling and (kind of) singing. This show is always at its best when it forces actors to mimic the tipsy sounds the narrators make, and this segment has plenty of that.
Best line:This thing.
Watch the full episode, which is perfect, here. 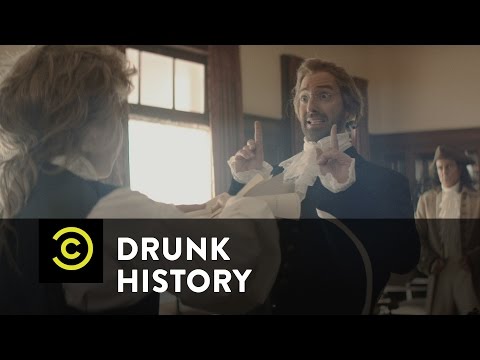 Season 4, Episode 9
Starring: Alia Shawkat, Aubrey Plaza, Bokeem Woodbine, Tony Hale, Dave Grohl, David Wain
The gist: The very first volume of Drunk History, with Michael Cera as Alexander Hamilton, was great. It set the tone and the bar and felt endlessly rewatchable. You’d think it would be impossible to top -- but what if you had drunk Hamilton creator Lin-Manuel Miranda do an entire 21-minute, star-studded episode devoted to the guy? That’s exactly what this is, and it's also great. Cera's Arrested Development colleague, Shawkat, takes over as Hamilton and reenacts the Founding Father's famous run-ins with a hurricane, Aaron Burr, and Questlove.
Best line: "I wanna order Dominos."
Watch the full episode here.