The Story Behind the Greatest Farts in Movie History

Faking flatulence is an art. A real-life stinker toots out of the human bottom with a pitch, a dimension, a viscosity, and a soul. If you want a breakage of wind to ring true, like they do in Swiss Army Man (now available to stream on Amazon Prime), then you hire ears tuned to the finer frequencies of farting. Steve Nelson, Swiss Army Man's on-set sound mixer, and Brent Kiser, the supervising sound editor on the movie, have those ears.

Swiss Army Man stars Paul Dano as Hank, an emotionally shattered man preparing to off himself on a deserted island. But before he can jump, Hank discovers the dead body of Manny (Daniel Radcliffe), whose active anus provides the island-dweller with a jet-powered escape. The mainland is where the pair's real adventure begins. Manny's spring-loaded body becomes Hank's survival tool. His naïveté, courtesy of a reanimated consciousness, guides Hank's spirits. Awakening, and more farts, follow.

"[The movie] uses farts to address the issue of shame," says Kiser. "If you're like, 'Well, you shouldn't feel shame that you're gay,' that carries so much context. There's emotional weight and context to that that somebody will understand. But farts are so universal and just so harmless that you can actually really address a huge, deeper issue through the thing."

Directors Dan Kwan and Daniel Scheinert, who cut their teeth on music videos and Adult Swim television before making their directorial debut with Swiss Army Man, labored over the cutting of cheese. Their first thought was that all farts could be captured on set. They tasked Nelson with the hunt.

"No one had talked to me about this in advance," Nelson admits with a laugh. About halfway through the Swiss Army Man shoot, Kwan and Scheinert ripped a surprise morning announcement: If anybody ever felt like they had to fart, they were to proceed to Steve, who would record it. "I was hearing this for the first time, as was everyone else. That's how that began."

There was a split between those on the Swiss Army Man crew who ignored the orders and those who were giddy to record their flatulence for posterity. A woman on the mixer's sound crew produced the first fart within 10 minutes of breakfast. Nelson isn't sure gaffer Matt Ardine ever managed to hold one back in time for the microphone to come out, but apparently, he volunteered on a daily basis. And Paul Dano was more than happy to squeeze one out in the name of art.

"We were about to do a take, filming inside the cave, and he just reached up and grabbed the mic right out of the air from the boom operator and just put it right up close to the source and gave us a good one." Nelson describes the noise as "short and to the point."

When sound mixers record dialogue on set, they position boom microphones a short distance from the speaker, angled around 30 degrees, so as not to pick up the sound of smacking lips. Nelson says bilabial consonants and lip pressure aren't issues when recording farts. For butt sounds, he positioned his microphone right in front of the air current.

Timing was everything. With so much of Swiss Army Man filmed on location in the woods, Nelson spent countless hours eliminating background noises by swapping out equipment and prepping locations. (To reduce noise from a stream, for example, Nelson's crew put foam underneath rocks.) This caused him to miss most of the good farts. "Ninety percent of the time was someone saying, 'Oh man. You guys just missed a great one. I was over by the craft services table and it was amazing.'"

Since most of the on-set farts were unusable, Kwan and Scheinert turned to Kiser and the post-production sound team to fill any of the movie's dead air with gas. The on-set farts became a map for a technical flatulent soundscape: The movie demanded dry farts, wet farts, underwater farts -- if a character needed to fart in a particular location, Kiser needed to categorize it. After the movie wrapped shooting, the supervisor held a six-hour fart-recording session to create a library of fart sound effects to supplement the editing process. 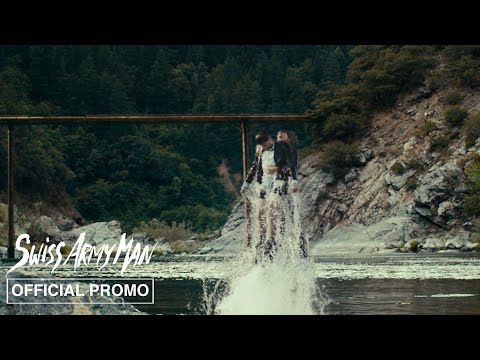 "We started out doing kindergarten-style things, like putting our hand against our arm and hands, and stuff like that," Kiser says. The classic technique matched on screen ("especially for airy farts," the engineer notes) and allowed the crew to focus on the performance of the fart. Kiser supplemented the vocal noises with real recordings of gastrointestinal activity, picked up by stethoscope microphones. A local Mongolian hot pot joint provided the indigestion.

"Daniel Shiner has the loudest intestinal or digestive system I've ever heard," Kiser notes. "He might have 1% body fat. I think his body, there's no fat to deaden any of the sound."

All the bottom burping ultimately needed to strike the right balance. They couldn't be cartoonish, Kiser says, but they also needed to spurt and sputter to sell them as farts occurring in real time. That meant fielding new fart requests from Kwan and Scheinert as they pieced together the movie.

"I'd get a phone call from Daniel Scheinert, who'd be like, 'Hey, buddy, what's going on?' We really need a fart that sounds like [BRRRRUUUUH].' I'd be like, 'OK, cool, do you want it intestinal? Do you want it inside, or do you need more flat butt cheek?" Then he'd be like, 'Hmm. Interesting. Maybe we'd start with more intestinal, then get butt flap.' These are things we can say in our industry, and it's OK."

Kiser tried everything to invent fart sounds. For Manny's underwater flatulence, members of his team dunked their faces into bowls with different viscosity of liquids. They also blasted a hose in buckets of various sizes. One sound Kiser dubbed the "Apocalypse Now fart" was a combination of mouth sounds and spinning fan blades, creating a helicopter-like noise, à la Francis Ford Coppola's classic war film. The meticulous effort was worth it in the end; Swiss Army Man was ultimately mixed in state-of-the-art Dolby Atmos surround sound, allowing Kiser to place fart noises anywhere along a room's X, Y, and Z axes.

Sadly, Paul Dano's recorded fart didn't make it in the cut. Only one authentic fart did: a sound we hear towards the end of the movie, when Manny farts in front of a girl for the first time.

"We just need a longer, better fart for that scene," Kiser says. Enter: editor Matt Hannam. "He was like, 'Brent, will you use one of mine?' I'm like, 'Are you kidding? For how much you've helped us out and made this process work? Yes, we will use one of your farts.' So I get a folder from him that just said 'Good Farts.' It was like 'Fart 1-9.' He'd been collecting his own farts for the past two months and chopped them down to nine good farts."

Matt Patches is Thrillist’s Entertainment editor. He previously wrote for Grantland, Esquire.com, and Vulture. Find him on Twitter @misterpatches.