In a long year that felt like what I imagine a long hug from a Dementor feels like, memes provided a much-needed refuge. Plenty, including repurposed SpongeBob SquarePants characters, bummed Ben Afflecks, and miniature Drakes, helped us cry less and smile more.

Below, in rough chronological order, we remember the year's 16 best, the ones that weren't totally awful, are still pretty damn amusing, and give us hope that the internet can help 2017 turn around. (In other words, don't expect to find Harambe, Ken Bone, or any of those presidential debate sound bites.)

RIP, Running Man Challenge. You were a truly beautiful thing while you lasted.

We'll let this spin on the classic movie opening-narration trope speak for itself. 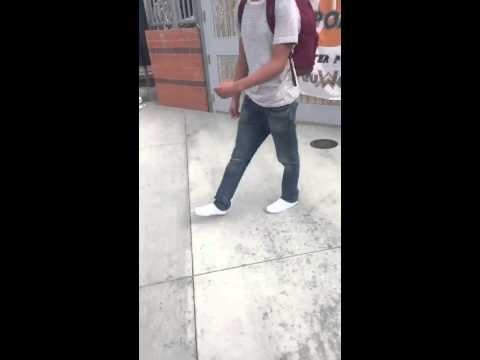 Hearing the phrase "Damn, Daniel" now is, admittedly, as fun as hearing someone say "wazzup," but the parodies Josh Holz and Daniel Lara's viral videos inspired are nothing short of treasures.

"Don't talk to me or my son ever again"

As the Daily Dot pointed out, this meme -- which pairs the above punchline with people, animals, and objects alongside smaller versions of themselves -- laid low before exploding in popularity earlier this year. Thanks be to Yoshi.

The only thing sadder than Batman v Superman was the fact that Ben Affleck had to promote the DC movie amid poor critical response. One interview he did with co-star Henry Cavill in particular gave birth to the above Sad Affleck-"Sounds of Silence" clip, which YouTubers began riffing on by complementing the actor's downcast eyes with snippets of Joy Division, Sam Harris, and Curb Your Enthusiasm.

The artwork for Views took on a life of its own when Photoshoppers began putting the tiny Drake perched atop the CN Tower on other objects. The fun reached its peak when The Young Astronauts created a website that made shrinking and teleporting Drake as easy as one, two, fountain penis.

Though the meme-stream media was charged with killing Dat Boi, the polarizing green frog that briefly invaded Tumblr and Twitter via unicycle, that doesn't mean you have to completely forget about the unexplainable joys he and his brothers gave the world.

Bottle flipping reached new heights this year, thanks to the above kid's talent show performance, this other kid's incredible Halloween costume, and the downfall of LeBron James. The only thing better than watching everybody's daring attempts to pull off plastic acrobatics? Watching the heavily edited fakes that emerged as part of the "haters gonna say it's fake" meme, one that extended well outside bottle flipping.

This year's replacement for Confused Mr. Krabs was versatile, happy to stand in as a response to situations that elicited primal confusion, anger, or panic.

One Twitter user's insightful take on an Arthur freeze frame led to this year's other great representation of inner frustration.

Sure, Olympians Michael Phelps and Usain Bolt didn't disappoint on the medal front this summer -- but they also supplied us with a couple choice photo ops-turned-memes. Phelps' in particular was so memorable it became a hashtag, the basis for an Intel commercial, and a fun thing for dogs to imitate.

When New York's very own Conceited pursed his lips for the camera in an Ultimate Rap League battle, he probably didn't know that his face would spawn a belated GIF and one of 2016's best reaction images. Fortunately, it did.

This stationary fad became so popular it took Rae Sremmurd's "Black Beatles" -- the song that served as the chief backdrop for many uploads -- to No. 1 on Billboard's singles chart. It also reinforced the fact that Desiigner can't stand still.

Mollie Goodfellow and several others have made good use of old Biden White House pics to repaint the vice president as a slapstick-oriented prankster who's just not ready to accept the Election 2016 results. Watch your back, Trump.

A puppet with poor eyesight, a devil for your shoulder, a lover of pizza.

For a year marked by the death of David Bowie, Prince, Phife Dawg, Muhammad Ali, Gene Wilder, and Hillary Clinton's presidential hopes, the phrase "Fuck 2016" became an appropriate refrain, with all the "me at the beginning of 2016 vs. me at the end of 2016" splits serving as the perfect visuals. We're ready, 2017 -- just be gentle.