Fact: Marc Maron’s WTF podcast is still rolling on like a bat out of hell. Since 2009, the interview series has amassed more than 800 episodes, spawned an IFC show, and shared unfiltered talks with Iggy Pop, Thom Yorke, Susan Sarandon, Cindy Crawford, and a revolving door of stand-up comics. Maron resists descriptions of his show as therapy, but his raw, anxiety-riddled approach never shies away from having “conversations about real shit.” Every episode is a deep dive into what makes us human, so we’ve put together a list of 15 must-hear WTF episodes that comedy lovers and casual listeners can enjoy. Let the self-analysis begin. 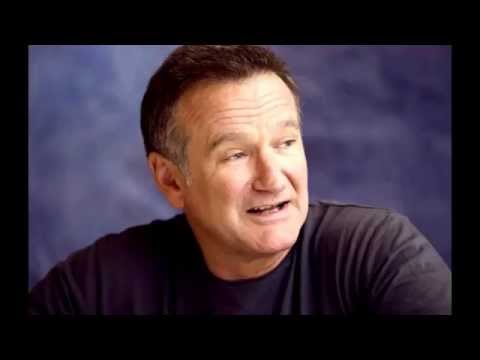 Episode No. 67 (April 26, 2010)
Robin Williams’ influence transcended generations, and his death in 2014 triggered a tribute lauding everything from his PG-friendly adventures (Aladdin, Jumanji) to darker, underrated works (One Hour Photo, Dead Poets Society). But it left us with one question: What happened? Maron shed light on the situation when he reposted his 2010 interview. In the interview, Williams underlines his battles with depression and addiction, and how his alcoholism was “trying to fill the hole.” The episode was an honest and raw portrait of a comedian we thought we knew, and as Marc later noted, it changed his life and “many people’s perception of Robin Williams.”

Episode No. 95 (August 2, 2010)
The likes of Bill Burr, Joe Rogan, Amy Schumer, Questlove, Kevin Smith, and more revered the late New York City comedian Patrice O’Neal, but he wasn't for everyone, and you'll probably find yourself shouting back at his 2010 appearance on WTF as dishes on women and how romantic relationships strictly adhere to his own moral code. What makes the episode an essential listen is that O’Neal bares it all, openly discussing race, prison, his absent father, and how being convicted of statutory rape (when he was just 17-years-old) permanently altered his views of the world. As Maron noted in his re-post of the interview in November 2011: “He just had some f*cking magnitude.”

Episode No. 111 & No. 112 (October 4, 2010)
The Internet-appointed “Greatest Podcast of All-Time” got its title by underlining a word we don’t pay enough attention to: friendship. Marc and Louis got their start as struggling young comics in Boston. They played the same clubs, flirted with the same women, and eventually became pals after seeing one another in their own moments of humility outside of comedy. But by 2010, their relationship had faded away, making Louis’ two-part interview more of a raw and deeply personal conversation about a fractured relationship. The two discuss jealousies and insecurities without stepping on anyone’s emotions, and it still retained a large amount of laughs as their chat began with the realization that they are both terrible at responding to emails. It’s the most human WTF has been to date and even now, it’s a fascinating look at two comics that share “a weird, emotional understanding” but barely know anything about each other’s lives. 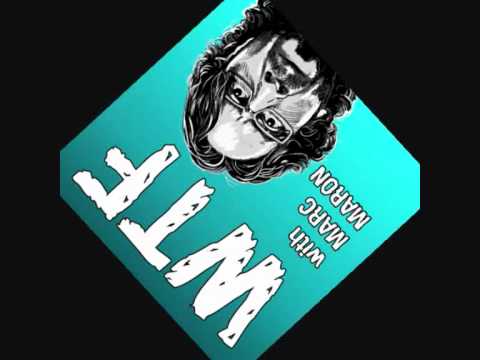 Episode No. 145 (January 31, 2011)
Gallagher was the first guest to ever walk out on a recording of WTFpod. The comic -- who is most famous for smashing watermelons with a mallet -- used the interview to express his frustration over not getting his own talk show and being overshadowed by “lesser talents” such as Jay Leno and David Letterman. Throughout his talk with Maron, Gallagher insists he doesn’t care about how he’s perceived. But when the host addresses his use of blatantly racist and homophobic jokes, all hell breaks loose. The interview ends with Gallagher screaming and storming out of the room. Marc calls after him -- forever immortalizing the (catch)phrase “Aw, come on Gallagher” -- but it’s to no avail, thus creating a genuine “WTF” moment.

Episode No. 233 (December 5, 2011)
This episode isn’t what you expect. There’s a lot of small talk about food, travel, and addiction but in some weird Symphony of Science sort of way. Maron and Bourdain bond like two grade-school pals who just reunited after 40 years of self-discovery. The pair find parallels between cooking and stand-up comedy (they’re “all about immediate gratification”) and Bourdain wastes no time in admitting to Marc that he didn’t dream of being a writer and thought creating a Byronic persona would automatically make him an artist. During his younger days, he was “an angry, pissed off kid” who fell into the business and bankrupted restaurant owners that bought into his line of post-Culinary Institute of America nonsense. As Bourdain put it: “Using a few French terms and being able to make a pâté en croûte went a long way back then.” 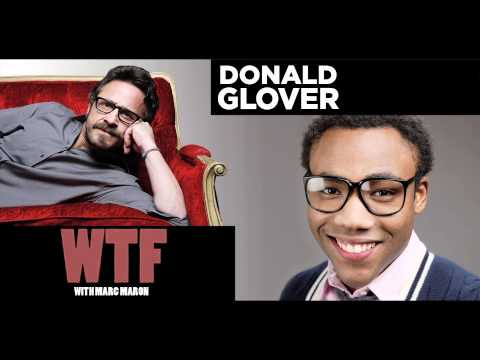 Episode No. 235 (December 12, 2011)
Maron’s chat with Donald Glover was pre-Atlanta and pre-Because the Internet, but it stands as one of the most interesting interviews the writer-turned-actor-turned-rapper-turned-director has ever done. Glover reflects on his childhood -- growing up with foster siblings, being raised as a Jehovah’s Witness, and masturbating to Susan Sarandon’s character in White Palace -- and he never shies away from discussing race. His accounts of the Confederate South, his dad being the original black nerd (for liking Prince and Kraftwerk), and attending a performing arts school in a white neighborhood lead to a back-and-forth about America’s ongoing obsession with race and its reluctance to address social class. At one point, Glover admits that he was never cast for black roles because he wasn’t “black enough” and partly due to there still being a prejudice and weirdness with nerd culture. It’s an anecdote worth noting given his upcoming featured roles (Star Wars, The Lion King) and how nerd culture has and hasn’t changed since 2011-2012.

Episode No. 245 (January 16, 2012)
Todd Glass’ appearance in 2012 was a definitive moment for the stand-up comic (and comedy itself) as it gave him an opportunity to make his “announcement.” Glass came out of the closet during his episode and partially due to the number of gay youths that were struggling with their identity. He felt obligated to share his story -- discussing homophobia, prejudice, bullying, and his own experience with questioning his sexuality for most of his life -- and his actions solidified WTF as an unbiased platform for analyzing emotions that extend beyond the comedy world. 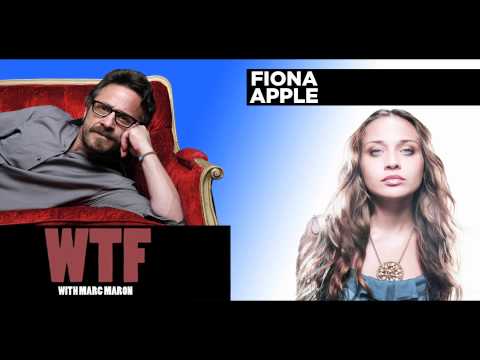 Episode No. 297 (July 16, 2012)
One of Maron’s most underrated attributes is that his fixation with the arts and existential turmoil always seems to attract creatives that rarely take part in interviews. Fiona Apple is one of those people, and when she visited The Cat Ranch in 2012, barely mentioned her new album The Idler Wheel. Instead, she weirded out about everything else -- including hummingbirds, colonics, eating disorders, her OCD, and her childhood: “I didn’t like anybody... I had so many important things to say and no one would listen to me.” Marc manages to sneak in a question about her viral meltdown at New York’s Roseland Ballroom, but she plays it off in the most WTF way -- “Because I’m human”.

Episode No. 558 (December 11, 2014)
In the vein of Amy Poehler (No. 183) and Kristen Wiig (No. 734), Jenny Slate’s audio op-ed with the Cat Ranch wrangler succeeds because it offers an unfiltered glimpse of herself. In her sit-down with Maron, Slate candidly talks about Obvious Child, improv, aging, group nudity, stage fright, and how her difficult chapter at Saturday Night Live ended when she got the news via an web news article. It’s an episode that will make you laugh, cry, and surrender to a whole mess of “this is adulthood” feelings, but as Maron divulges towards the end: “How can you not love her?”

Episode No. 613 (June 22, 2015)
Maron’s anticipated one-on-one with the President could have been an overhyped phenomenon that leaned on his Air America ideals, but it wasn’t. Instead, he treated Barack Obama as just another podcast guest -- eliciting a conversation about gun violence, race relations, basketball, his daughters, and why Louis C.K. is “wonderful in such a self-deprecating but edgy kind of way.” It deserved a Part Two, so “The President Was Here” could have rounded out a trifecta, but looking back the episode is still a quintessential milestone for podcasting.

Episode No. 617 (July 6, 2015)
Maron’s talk with Against Me! founder Laura Jane Grace stemmed from a tweet and was coincidentally a lesson about words and their ability to offend and empower. The singer had been open about her transitioning since coming out as transgender in 2012, but their discussion -- which covered her “double life”, her parents, her ongoing divorce, and the punk community’s general reaction -- was met with an enormous amount of tension. Marc’s questions about “wearing the clothes” and clarifying sexual attraction are offset by Grace’s explanation for her suicidal nervous breakdown (“pills and alcohol”). It made for a tricky conversation about a trickier subject and an episode that never felt compelled to switch lanes.

Episode No. 653 (November 9, 2015)
If Louis C.K. is Maron’s Charles Citrine, then Lorne Michaels is his white whale... who bit off a piece of his ego 20 years earlier. The two met in 1995 to discuss a potential gig on Saturday Night Live’s Weekend Update but Marc never received the call, so he spent the next two decades obsessing over “this evil wizard” who exiled him from a different career in show business. But after a slew of interviews with SNL veterans, Maron finally caught his whale and posted a two-hour episode that discusses Michaels’s famed candy bowl, his journey through two different eras of television, and how actress Lily Tomlin (Nashville, Grandma) changed his life in the early 1970s. Marc also gets the closure he was looking for (and solves his fear of Jolly Ranchers) and his excitement throughout illustrates how his therapeutic rifts of emotion can churn out an unforgettable listen.

Episode No. 750 (October 13, 2016)
Maron’s erratic love for new music has spawned a subgenre for the pod (see #559: St. Vincent, #806: Mac DeMarco) and it’s solely responsible for his talk with Margo Price. The pair explore the singer-songwriter’s upbringing in Aledo, Illinois, and how a night with mushrooms and The White Album ended her stint as a cheerleader. They also dissect the various experiences that inspired her debut album Midwest Farmer’s Daughter and that’s where things get real. Halfway through, Price details an unexpected pregnancy and how she lost one of her newborn twins to hypoplastic left heart syndrome and a botched surgery -- thus starting a downward spiral that fueled her manic depression and led to a weekend in the Davidson County jail. Hearing her talk about the incident at length and admit “I was only trying to hurt myself” is tough to digest, but it culminates in a live performance of “Desperate and Depressed” that ties her worlds together.

Episode No. 773 (January 2, 2017)
It took nearly 800 episodes for the most famous WTF-er to have a sitdown with “The Boss,” but it was worth it. The two Jersey guys reflect on family, fear, anxiety, depression, the “un-American” Donald Trump, and Springsteen’s attempts to build a version of himself “that other people would be able to stand.” There are no references to Tunnel of Love or callbacks to stories surrounding Born in the USA. It’s more or less dad talk -- Maron being Maron while The Boss dissects the relationship he had with his late father and the complications that came with it. It’s an unnerving listen and one that boldly traces the father/son/man behind the legacy.

Joshua Khan is a Toronto-based writer who became a WTF-er thanks to another WTF-er by the name of Dan Rankin (R.I.P.). Follow him and his personal endeavors over at @blaremag.