I'm the head writer of the all-new, all-different, actually-not-that-different-so-don’t-worry-fans 11th season of Mystery Science Theater 3000 on Netflix. You may know MST3K as “the greatest show in TV history” or “that bad movie show with the robots.” Both are accurate.

MST3K has been my favorite show since I was an adolescent, so writing for this season was basically a dream job. When Thrillist asked me to name my top 10 favorite episodes of the original series, it was difficult. Feelings were hurt. Tears were shed. But in the end, I did it.

Now keep in mind, I’m not saying these are the 10 BEST episodes, merely 10 I love for a variety of reasons. So come along, fellow space travelers, as I name the experiments that hold a special place in my heart. 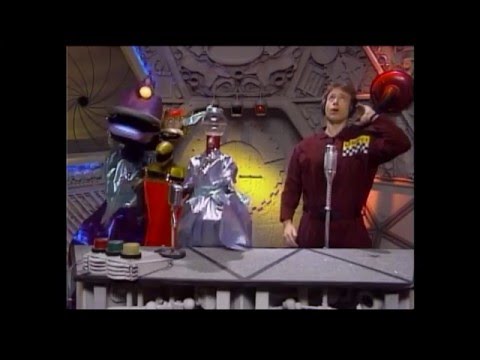 Air date: 11/29/91
Host: Joel
This classic tale, about a young boy who finds a magical alien named Trumpy, not only introduced the classic catchphrase, "Trumpy, you can do stupid things!" It features one of the best examples of what I believe is the theoretical-philosophical heart of the show -- taking something bad and making it enjoyable, like a cultural recycling plant. In this case, a scene where a teen band records a generic, hard-to-understand pop song ("Burning Rubber Tires") becomes the cast of the show singing "Idiot Control Now" a deliberately nonsensical version of the same song (sample lyrics: "With a pickle mind/We kick the nipple beer") and re-enacting the scene in precise detail down to recreating the T-shirt the recording engineer wears in the scene. It’s like a comedic philosopher’s stone, turning crap to gold. 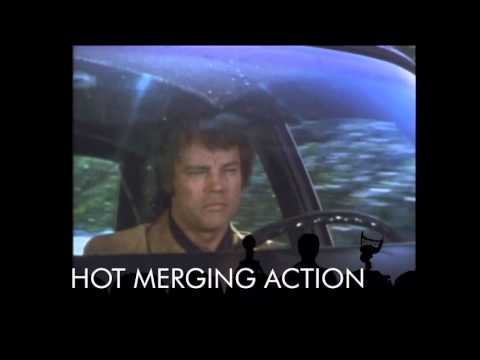 Air date: 10/23/93
Host: Joel
"Mitchell" is another great example of an MST3K strength -- using multiple, successive riffs to take one aspect of a film’s character and turn it into his or her defining trait. In this case, Joe Don Baker’s street-smart, rule-breaking cop Mitchell becomes a food-obsessed idiot. Even more than that, this was the final episode for the original host, creator of the show, and one of my heroes, Joel Hodgson. His farewell is fittingly bittersweet, and I remember how affected I was at the time as an 11-year-old -- long before I knew I’d get to work closely with the man.

Air date: 4/11/99
Host: Mike
First off, Soultaker, a low-budget Final Destination-inspiring (I assume?) teen thriller possesses a simply hilarious riff and continues the show’s Sci-Fi Channel-era discovery of Martin Sheen’s brother, Joe Estevez. But beyond that, it features cameos by two former members of the cast, Joel Hodgson and Frank Conniff (as TV’s Frank), and serves as an example of the family feel of the show. This wasn’t a slick, Hollywood production. It was being slapped together somewhere among the winter winds of Minneapolis, and the fabled niceness of that region comes through in a special tone the show possessed that I would call "weird-nice." It’s a weird show, and a sharp show, but never mean or overly cynical. Its heart was large and open in a natural, honest way that television rarely sees. 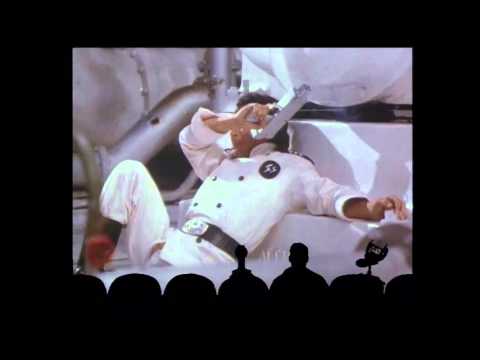 Air date: 11/8/97
Host: Mike
I won’t do a lot of bloviating about this one. It’s just a really, really, really funny episode and contains my favorite long riff in the series, as Mike Nelson and the bots come up with different names for the over-muscled hero of this half-assed Star Trek/Star Wars/Battlestar rip-off: Slab Bulkhead, Trunk SlamChest, Slate Fistcrunch, Big McLargeHuge... it goes on for a long time, and it’s beautiful.

Air date: 11/30/91
Host: Joel
One of my favorite things about MST3K is that they’d precede their shorter movies with educational films that were often frightening in the strange glimpse they gave into the secretly warped psyche of the generations before ours. So let’s get one thing straight: I’m sure the riff on this movie (about a giant man) is hilarious, but I barely remember it. What makes this episode one of my favorites is the short, Mr. B Natural, in which the titular androgynous spirit of music Peter Pans a teen boy into learning an instrument. Joel and the bots manage to be weirded out by it while also tapping into the addictive whimsy of the whole thing. 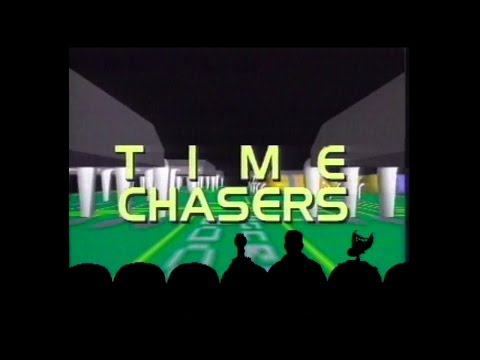 Air date: 11/22/97
Host: Mike
You’re going to notice a lot of Season 8 episodes on this list, because once the series found its groove after moving to the Sci-Fi Channel (after seven years at Comedy Central), it hit a really beautiful stride. Case in point: "Time Chasers," a very, for lack of a better word, Vermont-feeling time travel adventure, which is just hilarious all the way through. Alongside a classic movie riff is a series of sketches telling a real science-fiction adventure, in which Crow tries to save Mike by traveling into the past, only to make everything worse for him. Mike Nelson plays himself, his slacker young self, and his mean brother Eddie in different scenes. It’s a time-travel tour de force! 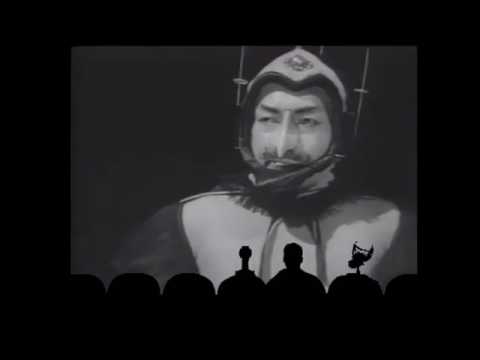 Air dates: 8/16/97, 10/11/97
Host: Mike
Technically these are two episodes, but I’m counting them as one because the movies are nearly impossible to tell apart. Both are Japanese, both involve an alien invasion that’s thwarted by a caped/helmeted superhero, and both are told from a kid’s point of view. Together, they show you just how amazing the MST3K crew was at taking extremely similar schlock and making different meals from it. In "Prince of Space," we get an appearance by chicken-like villain Krankor, and in "Invasion of the Neptune Men," we have riffing robot Tom Servo very realistically losing his mind during an endless footage-recycling spaceship battle. Fun!

Air date: 12/6/97
Host: Mike
A strangely Casablanca-obsessed PBS science-fiction production starring Raul Julia in a plot that isn’t worth really going into, this episode is on my list for two reasons. First, it’s so funny that when I randomly stumbled on the John Varley story the movie was based on, I started unconsciously inserting riffs from the episode into the text as I read. Second, it features writer and cast member Mary Jo Pehl’s immortal performance of the ballad "When Loving Lovers Love," the kind of wonderful scene most other shows would have denied us, merely because it’s completely tangential to the rest of the episode. WHEN THAT’S PARTLY WHAT MAKES IT SO WONDERFUL.

Air date: 12/21/91
Host: Joel
Look at the title: This movie was tailor-made for riffing, and Joel and the bots do it proud. But this episode is really up here for one immortal piece of dialogue that symbolizes so much about the show's unique voice and special heart. When asked what he wants for Christmas, Crow responds: "I want to decide who lives and who dies." To which Joel replies, in his best parent-letting-a-child-down-gently tone: "Oh, I don't know... " It could be a very hard-edged joke, but instead it's adorable and sweet. And in case you were wondering, that's exactly what working with Joel is like. Me: "Joel, let's do a two-minute long speech here about Jonah getting drunk in various cities and knocking buildings down!" Joel: "Oh, I don't know... " 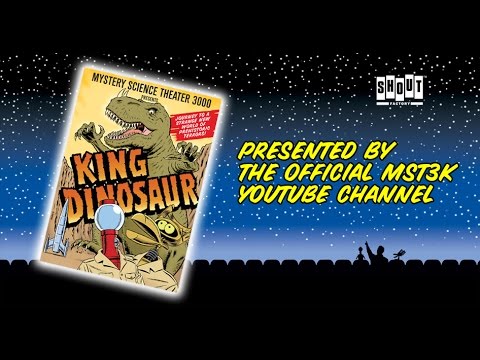 Air date: 12/22/90
Host: Joel
"Why?" long-time MSTies may ask upon seeing this title so high on the list? Why put a solid, but not exactly groundbreaking or spectacular episode at No. 1? Well, remember that I never said these were the best; I said these were my favorites. And this is my favorite episode because it's also the FIRST episode of MST3K I ever saw, one very historic Friday night at midnight after divine intervention of some sort led me to discover that yes, we did get Comedy Central on my cable package. This was instantly my favorite series in television history, the only one that could fill a need I didn't even realized I had until it was a part of my life.

One particular segment -- in which Joel operates a puppet named "Joey the Lemur," who sings a long song about lemurs merely because an animal that looks kind of like a lemur appears in the film -- was so rambling and inexplicable that I instantly memorized it, and performed it for my younger brother on long car rides. Nothing could really prepare me for watching my first MST3K. It was funny, it was strange, it was sweet. It felt like home.