Podcasts are an incredibly personal medium -- we often listen to them alone, usually on headphones, with hosts’ voices sounding like they’re inside our own heads. They keep us company and change how we see the world. There’s that intimacy, and also the specificity of taste. From comedy to true crime, from documentaries to fiction, podcasts span a huge range of genres and styles.

And in each style, what makes a podcast great varies: the carefully doled out storytelling of suspense, the sparking rapport of comedy, the insightfulness of criticism, the unexpected adventures of strange investigations. The great thing about podcasts is that they encompass it all. But god, that makes it hard to write a best-of list.

But to chart the podcasts of 2017, I turned to the people whose opinions I trust most: the makers of my favorite podcasts. I asked them what podcasts they loved most in 2017. Here are their answers:

This year I fell into a deep 12 Hour Day rabbit hole. If you don't know the show, comedians and TV professionals J.D. Amato and Connor Ratliff turn the mics on... and don't turn them off for 12 hours. It's a wild, sprawling show that encompasses silly anecdotes, deep discussions of life, death, and art, and the occasional stealth nap. It's amazing, hypnotic listening.
-- Justin McElroy, My Brother, My Brother, and Me and The Adventure Zone

I try to listen to podcasts that feel really different than ours, so that I can hear what other people are doing. That means that I end up with a lot of pods about news, money, science and -- shockingly enough -- sports. I've always liked ESPN's 30 for 30 documentaries (and along those lines, Bryant Gumbel's Real Sports on HBO), so it's no surprise that I love the new 30 for 30 podcast, which tells Actually Interesting stories about sports and sports people who do those sports (which is incredible coming from someone who cares extremely little about either. Can you tell?) If you're just starting out, I highly recommend the episodes "Yankees Suck" and "The Trials of Dan and Dave."
-- Lindsey Weber, Who? Weekly

When I discovered Blank Check, starring the #TwoFriends Griffin Newman and David Sims, it completely took over my life. The show begins with an impossibly deep dive into the Star Wars sequel trilogy before pivoting into a new show that explores the work of directors such as M. Night Shyamalan, Kathryn Bigelow, and James Cameron, all of whom had early success that earned them "blank checks" in Hollywood for the rest of their careers. It's so much better than every bad movie podcast out there, and Griffin and David have such a great friendship and infectious sense of humor that you'll forsake every other show in your feed until you're all caught up with theirs.
-- Tanner Greenring, The Baby-Sitters Club Club [Ed. note: Greenring is the author's husband] 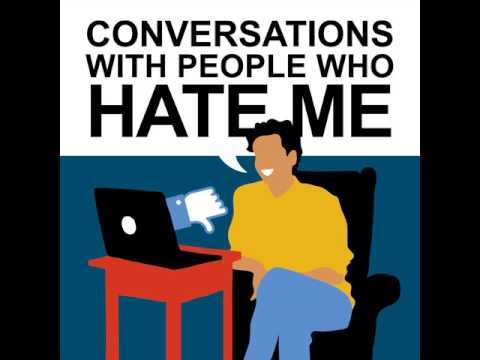 Conversations With People Who Hate Me

My favorite podcast this year was Dylan Marron's Conversations With People Who Hate Me. It's a new podcast where Dylan has phone call conversations with people who have said hateful things to him on the internet. Though the idea of talking to online trolls isn't entirely unique, the way Dylan approaches the talks with kindness and empathy is absolutely refreshing. Dylan uses comedy, intelligence, and compassion to skillfully disarm the hatred and vitriol that feel all too familiar in our increasingly divisive society. He even manages to... dare I say it... change people's minds?! Or at least broaden their perspectives. I consider it mandatory listening for any podcast fan.
-- Jonathan Braylock, Black Men Can’t Jump [In Hollywood]

Do You Know Who Jason Segel Is

Every episode, Nick Thune and Brendon Walsh call a different state with one simple goal: find out who knows who How I Met Your Mother star Jason Segel is. Along the way they learn about spaghetti sandwiches, whether you can put sharks in waterbeds, and whether the go-kart track is a good place to bring your mistress. It is sublimely stupid, but I find myself guffawing at least a couple times an episode.
-- Alex Goldman, Reply All

Last year, a small team interested in creating media projects invited a few audio producers to meet them behind the walls of San Quentin prison. They were engaging, smart, and buzzing about starting a new podcast about life inside the system. Since then, despite a series of seemingly impossible challenges, they have created one the most transportive podcasts ever. Ear Hustle, amazing stories of life inside prison, shared and produced by those living it. It’s produced by Earlonne Woods and Antwan Williams, currently incarcerated at San Quentin State Prison, and Nigel Poor, a Bay Area artist; this team works with San Quentin’s media lab to create some of the most compelling stories in any medium. Do yourself a favor, and listen to stories from a place you hope never to see.
-- Glynn Washington, Snap Judgement

My favorite new podcast of 2017 is Ear Hustle, the podcast about life behind bars at San Quentin, told from the perspective of inmates. It's astonishing. It paints a picture of what it means to be incarcerated that is so much more complex, nuanced, and human than the depictions we're used to. And it's impeccably made, from the charming hosts to the top-notch production.
-- Hrishikesh Hirway, Song Exploder

Hello From the Magic Tavern

I have been a big fan of Hello From the Magic Tavern for a while, but recently I binged all of the “second season” episodes to get ready for a guest spot on the show. It is rare to find a show that delivers simultaneously clever and incredibly silly humor so consistently. The improv and banter are incredible, but even better is their consistent world-build and love of the mythos they've created. If you love fantasy, comedy, and best friends all rolled into one, you'll love Hello From the Magic Tavern.
-- Travis McElroy, My Brother, My Brother, and Me and The Adventure Zone

I've listened to Hollywood Handbook on and off over the years. Always solid pods. But I have to say that recently Hayes and Sean have really hit a stride [by] taking it seriously. I have learned a lot about the Tinseltown. Some of the good interviews with their fame-o friends have been with Jason Greek-last name, Lauren Lapkus, Drew Tarver, and many other good episodes! Plus the advertisements are hilarious. This is not a sub-review -- I like the show. They somehow achieved 200 episodes and here’s to at least 100 more.
-- Ben Hosley, Blank Check

This podcast by KUOW is just nine episode but each is such a little gem. The premise of the show is that each episode takes on a big date in history (9/11, Princess Diana's death, Columbine) and then finds a smaller story, a triumph or pain that is unrelated but happened in the background. While the rest of the country was consumed by this big news, these people were having their own private joys and pains. I think it's such a great idea, and each episode is really touching and tightly packaged. I often still think about these people's stories when I am reminded of the news event that they were connected to.
-- Rose Eveleth, Flash Forward

Reply All gets my vote as the best podcast of 2017, because it captured 2017 in all of its messy 2017ness. The internet has become the fulcrum point between the best and worst of humanity, a terrifying Pandora's box of access and opportunity that seems to be moving society forward and backward simultaneously. PJ Vogt and Alex Goldman cover the gamut of ways Al Gore's creation has affected every element of the way we live today, swinging between stories of technological breakthroughs on the horizon, glossaries on the ever-changing language of meme culture, and gorgeous human-interest stories that merely use the web as their MacGuffin. The show hit its high water mark this summer with the "Long Distance" two-parter, which I'll avoid describing in depth so as to leave its non-stop twists and turns unspoiled other than saying it starts with a phone scam, evolves into a heartbreaking look at how the rest of the world views America, and ends with one hell of a punchline. It's better than Serial and S-Town combined.
-- Griffin Newman, Blank Check

Who? Weekly and She's All Fat

We love Who? Weekly, which was just the pseudo-celebrity escapism we needed this year. And as for brand-new shows this year, we're huge fans of She's All Fat, which is conversational and feminist like our show, with a focus on body positivity.
-- Ann Friedman and Aminatou Sow, Call Your Girlfriend

For years, I’ve wanted to hear a podcast that was a riff on museum audio guides. Within the Wires Season 2 served that up, deftly using the form to tell greater narratives in fragments: one, of the world post-Reckoning, which extinguished most humans and ended family life as we know it; the other, the story of a mysteriously vanished artist, via the exhibition narrations of an admiring but bitter fellow painter. I want to rush through the series to find out how it develops, while also savoring the craft in the writing and Mary Epworth’s eerie music. Plus, Jeffrey Cranor’s ads are second to none.
-- Helen Zaltzman, The Allusionist and Answer Me This!

Jaime Green is a freelance writer and editor. She was also the host of The Catapult, a podcast of new writing read aloud. Find her on Twitter @jaimealyse.