The 9 Most Shocking Sex Scenes From 'The Americans'

Russians and Americans locked in a shadowy war of influence, media potshots, and public blustering. An uncertain world order in which the United States' leader is a celebrity first, politician second. The increasing, if vague, threat of more overt international confrontation. This all sounds familiar to fans of FX's The Americans, which, as the fifth season unfolds, is suddenly (if unsurprisingly) the most socially relevant show on television.

But before its politics were of pressing concern, The Americans made headlines for a wholly separate reason: searing, scandalous sex scenes. To take your mind off of those more damning parallels, here's a look at the show's provocative take on sexuality – from role-play to mutual oral stimulation to the Kama Sutra. 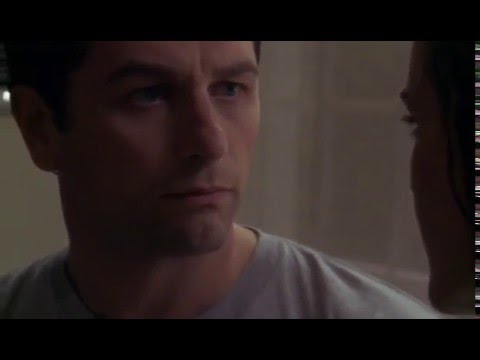 Philip and Elizabeth do it in the car after murdering her rapist.

Out of context, nothing about this scene seems controversial. Philip and Elizabeth Jennings (Matthew Rhys and Keri Russell) get it on in the front seat of their Oldsmobile while Phil Collins' "In the Air Tonight" plays lightly in the background, accentuating their intimacy with melodious soft rock. But Philip and Elizabeth are a far cry from normal -- they're KGB agents deeply undercover in early-'80s Washington, DC, and just moments before this car frolic they were boiling a body with acid and tossing the remnants in the ocean.

They're not without their reasons. The dead man was a Soviet defector, selling secrets to Americans for a paycheck, and had also raped Elizabeth when she was a KGB trainee. Philip snaps the man's neck after learning this, and together he and Elizabeth -- previously at odds as their motivations grew disparate -- dispose of the body, silently pledging themselves to one another. Elizabeth's front-seat "thank you" to Philip is surface-level lust, but the implication that murder kind of turns them on is disturbing in that quintessential Americans way.

While undercover, a suitor beats Elizabeth with a belt. Philip tries to retaliate.

The pilot introduces us to Elizabeth while she's fellating a "mark" (code for "gullible person to manipulate for information"). This moment, a seemingly by-the-numbers sex act with a stranger, doesn't feel too off the grid.

But then the man pulls out his belt and starts beating an undercover Elizabeth with it. The hard-to-watch scene is followed up with a bedroom moment where Philip, noticing Elizabeth's wounds as she undresses, decides to kill the man who did this to his wife. "You're not my daddy!" shouts Elizabeth, protesting Philip's determined self-importance as he tries to avenge her. It's a reminder that no matter how far they've come together, Elizabeth will not have Philip fighting her battles. He backs down, and the two move on, just like they always do.

"Shoot yourself into me, Clark!"

As a means of infiltrating the FBI, Philip routinely poses as "Clark Westerfeld," who, as he sells it, works for the Internal Affairs Division, overseeing counterintelligence agencies. As Clark, Philip is able to woo over Martha Hanson, the secretary of a top FBI supervisor. Poor, lovelorn Martha is a perfect target for the Jennings' operations, and her aggressive sexual exploits with Clark lend the show some much-needed levity.

Early in their courtship, Martha screams this infamous line -- "Shoot yourself into me, Clark!" -- during one of their many sweaty, aggressive sex scenes. It's as cringeworthy as it is hilarious. But every Clark and Martha moment is layered with a tinge of sadness; she thinks she's falling in love, and he knows he's culpable in her fantasies. Their complicated relationship becomes one of The Americans’ more touching side stories.

Philip and Elizabeth try out the "69" position. Paige walks in.

Elizabeth returns home after a near-fatal gunshot wound with a brand-new attitude. She's quicker to smile, and more dedicated to her family, including Philip, who stood by her side during her recovery, and their two children, Paige and Henry. The night Elizabeth returns, Paige enters her parents' room to ask a question -- but is startled when she discovers them involved in an act of mutual, simultaneous oral sex. The "69 scene," a basic-cable first, also serves as a metaphor for the reestablished trust between Philip and Elizabeth. Unfortunately for Paige, it's also a reminder that all parents do, indeed, do it.

Elizabeth has a three-way while undercover.

This one is brief, but startling. The scene opens with Elizabeth, undercover in a platinum-blonde wig, having sex with an unknown man in a shoddy hotel room. It seems like any old mission, but then a hand wraps around Elizabeth's stomach and we realize they aren't alone -- another woman is in bed with them.

At the height of passion, an undercover Philip, posing as a cop, busts through the door to break it all up. It's a setup, of course, but it shows the exploitative lengths the Jennings will go to in the name of Mother Russia, and just how comfortable they are witnessing one another embroiled in beguiling sex acts.

Season 2, "Behind the Red Door"

"Clark" has sex with Elizabeth.

Martha and "Clark" get married in Season 2. It's a sham wedding, naturally, but the event calls for a Clark backstory, and so Elizabeth poses as his matronly sister, Jennifer. While in her disguise (which is really one of the show's best), she strikes up a conversation with a wine-sloshed Martha, who reveals that Clark is an animal in bed.

Intrigued, Elizabeth later asks Philip to have sex with her as Clark -- both in his disguise and as he acts physically as the alias. At first, Philip is gentle with Elizabeth, but when she tells him it's the same as normal, and demands, "I want you to just be Clark," something snaps in Philip. He flips his wife over and takes her strongly from behind. Instead of pleasing her, his aggression scares Elizabeth, who bursts into sobs, possibly because the act evokes her previous experience with assault. The moment opens a door between the couple, revealing a vulnerability in Elizabeth normally hidden behind an ice-cold exterior.

Clark and Martha use the Kama Sutra.

This Clark-Martha scene covers similar ground as the other one on this list, but it's funnier, and more esoteric. Martha, suppressed in her lonely marriage to Clark -- whom she only sees a few times per week -- takes up a fascination with the Kama Sutra. Together, she and Clark demonstrate some of the more... acrobatic poses.

Martha's copy of the famous Indian sex manual will crop up again down the line, when the FBI finally catches wind of her betrayal and discovers it when they search her apartment.

Yousaf chokes Annelise during lovemaking. Philip puts her corpse in a suitcase.

This one takes two episodes to unfold, and is scandalous less for its sex act and more for what comes next. Annelise, the wife of the deputy undersecretary of the Department of Defense, was one of Philip's key informants. While undercover as "Scott," he persuaded her to strike up a relationship with Yousaf, a KGB informant from Pakistan. The two fall in love, and when Annelise reveals to him that the relationship began as a sham, he strangles her to death mid-copulation.

What follows is The Americans’ most gruesome moment. Philip, who's in the hotel room next door, phones Elizabeth. She arrives with a suitcase, and together she, Philip, and Yousaf snap Annelise's bones to fit her inside of it.

Philip and Elizabeth ignore their problems and get heated to Bowie's "Under Pressure."

After what seemed like a long respite from the scandalous sex scenes that give The Americans its headline fodder, Season 4 finally served up a whammy of nudity and scandal with this moment, which harkens back to the pilot.

Philip, distraught after revealing his true identity to Martha, is seduced by Elizabeth in an attempt to take his mind off the incident. Their lovemaking isn't graphic, per se, but it's juxtaposed with images of the FBI grappling with their comprimised secretary and Martha lying in bed ponderously, reminding us that Philip and Elizabeth are anything but a typical married couple, and that their sexual appetites are borderline sociopathic.

Queen and David Bowie's "Under Pressure" plays throughout the scene, which closes the episode. The late Bowie was apparently a fan of the show, and the song choice was in tribute to him.