The tabloid interest surrounding the Sundance Film Festival premiere of Big Time Adolescence was not unlike that for Honey Boy. The two films are very different...

This review was published during the 2019 Sundance Film Festival. Big Time Adolescence is now streaming on Hulu.

The tabloid interest surrounding the Sundance Film Festival premiere of Big Time Adolescence was not unlike that for Honey Boy. The two films are very different -- the former is a lighthearted coming-of-age dramedy, the latter an intensely personal picture of childhood trauma -- but they both star people whose reputations precede them. In Honey Boy, that's Shia LaBeouf. In Big Time Adolescence, that's Pete Davidson, Saturday Night Live cast member and namesake of that one Ariana Grande song.

If Jason Orley's movie had premiered at last year's festival, the curiosity level would have been much milder. A SNL star in a melancholy indie? Pshaw! We've seen Kristen Wiig do that a million times. But Davidson just wrapped up a wild year in which he dated Ariana Grande, radiated what some called Big Dick Energy, broke up with Ariana Grande, and posted a concerning note on Instagram. Before coming to Park City, he returned to SNL, joking about his troubles and Clint Eastwood's The Mule.

The good news: Big Time Adolescence is something of a triumph for Davidson. It's a modest, familiar movie, certainly, with themes about growing older and leaving the people you idolize behind, but his weirdly compelling screen presence elevates it. Davidson plays Zeke, an aimless 20-something college dropout who spends his days drinking, smoking weed, and hanging with his best friend Mo (Griffin Gluck of American Vandal), the 16-year-old kid brother of a girl he used to date. Mo has been enchanted with Zeke ever since he first met him as a little kid, and Davidson convinces the audience why. Zeke's basically a loser, but he's a charming, welcoming one, with a manic glint in his eye. Spending time with Zeke means impromptu dance parties, access to booze, and a generally unbothered outlook on life.

It also leads Mo into a casual drug-dealing enterprise when Zeke gives him some weed to sell at a party. But Big Time Adolescence minimizes that aspect of the plot. They don't become suburban Scarfaces. Instead, the movie is more concerned with Mo's growing disillusionment with the man-baby he's looked up to all these years. By nature of the plot, Zeke doesn't do much growing or changing -- that's for Mo to do -- but Davidson allows his demeanor to subtly shift and the melancholy associated with the static nature of his life creep onto his face. In one sequence, he and Zeke go to a museum. Somehow Davidson makes a line about how a painting looks like "scribbles and dicks" seem sweetly profound. There's a Sandler-esque energy to him, a pathetic zaniness that makes him appealing. 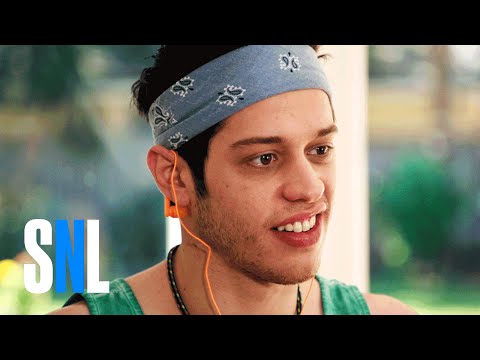 Davidson has never really found his wheelhouse as an SNL performer. He's a stand-up, not a sketch comedian, so he feels out of place when asked to blend into a scene and is often prone to fits of giggles. He's more assured when doing desk segments on "Weekend Update," but even there his riffs can feel a little unfocused, and he can look uncomfortable on screen. His best character, arguably, is the monosyllabic pool boy Chad, with his dazed-bro inflections, and there's some elements of Chad on display in Big Time Adolescence.

So Davidson isn't really stretching as Zeke, but he's still captivating on screen in a way he's never been before. (Case in point: His out-of-place turn in Netflix's Set It Up.) That's in part thanks to Orley's direction, which is moody and artful in unexpected ways. Admirably, Orley aims for the poignant ending rather than the upbeat one, even while occasionally hitting some wearisome beats along the way.

In a thread bookending the film, Zeke talks about how he'd like to be an actor and shows off his skills. They're good! Sort of like Davidson's. But just as Zeke is unable to break out of his bubble, it's unclear if Davidson ever will. His next project isn't much of a stretch either: He'll be starring in an autobiographical comedy directed by Judd Apatow. Even without that personal element, Zeke is so perfectly attuned to Davidson's strengths that it's hard to imagine him doing any other role as well. I mean, Zeke even has a tattoo of Hillary Clinton -- just like Davidson.