Everything We Know About 'Billions' Season 6

The show is going to look completely different next year.

After over a year away following a pandemic-induced production shutdown, Billions returned for the second half of its fifth season in September and ended with a shocking twist. The endlessly entertaining battle between hedge fund boss Bobby Axelrod (Damien Lewis) and Attorney General Chuck Rhodes (Paul Giamatti) has, at least temporarily, come to a close. With Season 5 all wrapped up, it's reasonable to get a little greedy and ask the all-important question: When will there be a Season 6? And what will an Axe-less Billions even look like?

Though the ending of Season 5 might have felt like a series finale to some, sending one of the main characters off to Switzerland and setting up a new central rivalry, Billions is not slowing down. In fact, the show will be back very soon. You  can sleep a little easier at night knowing that your portfolio of premium cable dramas is safe and secure. Below, find out everything we know about the sixth season of Billions.

Will there be a Billions Season 6?

Yes. Billions was renewed for a sixth season back in October of 2020, a few months after the production of the fifth season was shut down in New York. As noted in the Deadline article announcing the renewal, the goal was always to film the five remaining episodes of Season 5 before moving onto Season 6, and that's just what Showtime and the show's creators ended up doing.

Is Billions Season 6 in production?

Yes. After filming the last episodes of Season 5, the Billions crew carried on with their sixth season. During a Television Critics Association panel this past August, Showtime's President of Entertainment Gary Levine explained that the crew simply shot the last episodes of Season 5 and all of Season 6 together. “We felt guilty for the audience to have to wait as long as they did to see the rest of Season 5 so we and the rest of the producers just put our heads down and said just plow ahead,” he said.

On September 19, co-creator Brian Koppelman tweeted that they were "more than halfway through filming Season 6." If you're looking for more real-time updates on the production and behind the scenes info about the making of the show, follow Koppelman along with cast members Kelly AuCoin (Dollar Bill) and Daniel K. Isaac (Ben Kim) on Twitter.

Yes. Axe's departure in the Season 5 finale "No Direction Home" is not the first part of a big twist where he pops back up in the next season. In an interview with the New York Times released right after the finale, the actor explained the thinking behind his decision to end his run on the series. "There’s an opportunity maybe for me to return," he said in the interview. “But for now, broadly speaking, Axe has been vanquished.”

That means his character will likely remain in Switzerland and Lewis will remain in London, where he shot most of his scenes for the second half of Season 5. Lewis suffered a personal tragedy when his wife, British actress Helen McCrory, died from cancer in April of 2021. In the interview with the Times, he said he will remain in London for "obvious reasons" and that he had "always just assumed" that he would have a five-year run on the show, which, according to the article, is what he initially signed on for.

When will Billions Season 6 premiere?

Billions Season 6 will premiere on January 23, 2022 with the first episode of the new Axe-less season. 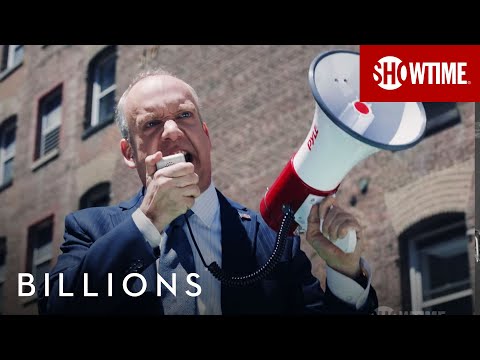 Is there a trailer for Billions Season 6?

Yes, you can view the teaser for Billions Season 6 above. It hints at the new central rivalry of the show, which will involve Chuck battling Corey Stoll's do-gooder billionaire Mike Prince.

How many episodes will there be in Billions Season 6?

Every previous season of Billions has consisted of 12 episodes, so it feels safe to assume that Season 6 will carry on that tradition.

Which cast members are returning?

Though Axe is obviously going to be hiding out in Switzerland for the time being, expect to see more from Chuck, Wendy Rhoades (Maggie Siff), Taylor Mason (Asia Kate Dillon), Mike "Wags" Wagner (David Costabile), and Kate Sacker (Condola Rashād) as the storylines spill over into Season 6. Corey Stoll, who plays the Axe enemy Mike Prince, has also been upgraded to a series regular for Season 6, so he's not going anywhere. He even sat in Axe's chair in the Season 5 finale. According to Variety, Daniel Breaker, who plays Prince's right-hand man Scooter, will also be upped to a series regular in Season 6.

What will Billions Season 6 be about?

Now that we've seen all of the post-pandemic Season 5 episodes, it's easier to get a sense of where Billions might be going in its sixth season. For one thing, we now know how the series will be acknowledging the pandemic within the reality of the show.

Episode 10 of Season 5 "Liberty," written by Brian Koppelman, David Levien, and Emily Hornsby, featured Axe quarantining in his apartment because he caught COVID from the pilot of his plane and the employees of Axe Cap all received the vaccine and were told they no longer needed to wear masks at the office. If you think about the exact timeline of how the pandemic happened in relation to the ongoing events of the plot, you will give yourself a massive headache. It's probably best to just go with the flow, which is what Billions seems to be doing.

More significantly, the show will have to fill the void left by Axe's departure. Prince will clearly play the role of Chuck-antagonizing villain to some extent, but he's a very different character and he will likely have a very different dynamic with Chuck, Wendy, and Taylor. At the end of Season 5's finale "No Direction Home," Mafee and Dollar Bill left Axe Cap to potentially start their own company, so expect that storyline play out in the background as Chuck sets his sights on Prince and, as he says in the Season 6 teaser, wages a war against "the criminally rich." There are plenty of battles ahead.