If you spend enough time on Twitter, you've likely encountered the type of user who appears to spend most of their time on the platform directing their righteous anger at the company's CEO, Jack Dorsey. He's known as "@jack" on the site, which he co-founded and launched in 2006, and the frustration directed against him often takes the form of (mostly reasonable) demands like "@jack needs to get rid of all the Nazis on Twitter" and "@jack should ban Donald Trump." Presumably, these highly active posters believe that Dorsey is listening to their feedback or, at the very least, occasionally seeing their grievances. Why else would they continue to send him messages?

On some level, "Smithereens," the second episode of Black Mirror's latest season, is about a guy who really wants to get the attention of a Dorsey-esque tech entrepreneur. Like "The National Anthem," the Season 1 episode about a Prime Minister forced to have sex with a pig on national TV, "Smithereens" takes place in a version of reality that's conspicuously similar to our present. There are no major technological leaps like you might find in the other new episodes and there's no Bandersnatch-like formal experimentation going on. The two powerful companies in the episode, a social network called Persona and a micro-blogging platform called Smithereen, are direct analogues to real-life entities, Facebook and Twitter. The broad outline is plausible even if the exact details aren't always believable.

Chris, played by Fleabag's "hot priest" Andrew Scott, works for the ride-sharing app Hitcher, a clear riff on services like Uber and Lyft. In between jobs, he attempts to grab moments of stability and inner-peace by using a meditation app, which gets interrupted in the opening minute by the "ping" notification that lets him know a pedestrian needs a ride nearby. He's parked in front of the London skyscraper that holds the offices of Smithereen, but after some light banter, Chris finds out that his passenger doesn't work for the company. She does make a comment that the company has "their own spa," the type of amenity that "Billy Bauer money" can get you. A worker-bee in the gig economy, Chris doesn't have access to "Billy Bauer money." 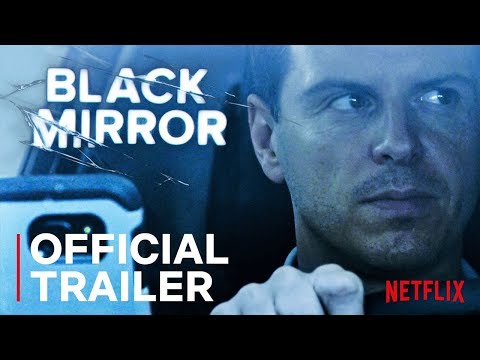 Eventually, we learn that Billy Bauer is the name of the Dorsey-like Smithereen CEO, and he's played by Topher Grace, finding yet another spin on the smug persona he used so effectively in last year's BlackKklansman as David Duke. It's an inspired bit of casting, on-the-nose in the best way possible, and the That '70s Show actor is incredibly effective in the role, channelling a potent combination of calculating intelligence and withering condescension. He spends most of the episode with his shirt completely unbuttoned, yelling into a giant phone. The only problem is that the episode takes far too long to spring Grace on the viewer.

Instead, the script by Black Mirror mastermind Charlie Brooker spends long stretches with Chris as he eats at a cafe, attends a grief support group, and has sex with a woman from the group. These scenes establish the rhythms of his life but they're not exactly gripping. From the jump, it's clear that Chris is troubled and that he's uniquely irritated by the constant buzzing of the smart phones around him. Like many stoic male protagonists in anthology shows and Christopher Nolan movies, he has a secret tragic backstory that you know will eventually explain his neurosis. In all of his scenes, he's bristling with indignation, but Scott manages to find some humor in the episode's handful of lighter moments.

Those funnier parts occur when Chris picks up a Smithereen intern named Jaden (Snowfall's Damson Idris) and immediately takes him hostage. Awkward and prone to verbal outbursts, Chris is hardly a master criminal, and Brooker finds moments of bleak comedy in the character's steadily increasing irritation at his put-upon prisoner. ("Why don't you dress like a fucking intern?" cries Chris at one point, confused by Jaden's stylish suit.) At times, "Smithereens" works as a self-aware, semi-comic anti-thriller, particularly as the action devolves into a stand-off in an open field. Holding a gun to Jaden's head, Chris manages to keep the cops at bay.

Having captured Jaden, Chris demands to speak with Billy Bauer on the phone. He doesn't want money, weapons, or a get-away plane; he just wants the chance to have a conversation. As you'd imagine, the task of getting a businessman like Bauer on the line requires jumping through bureaucratic hoops and an escalating series of tense conference calls, and Brooker scores some amusing satirical points in this section by showing how the surveillance powers of a Silicon Valley company dwarf the intelligence-gathering forces of the local English police force. Where the cops are left speculating about what's happening in the car, the executives at Smithereen can turn Chris's phone into a listening device with a few keystrokes. Again, plausible.

So, what does Chris actually want when he gets Billy on the phone? It's here that the episode flounders in its attempts to find an emotionally satisfying, intellectually provocative conclusion. Chris doesn't really want to have a conversation with Billy or get him to change anything about the platform. No, he simply wants to unburden himself of his convoluted personal narrative: His wife died in a car accident where Chris was driving her and the other driver was drunk, but the actual cause of the accident was Chris looking at his phone after receiving a push notification. Obviously, texting or tweeting while driving is dangerous, but it doesn't exactly land as a narrative twist, and as an ethical parable it has all the careful nuance of a PSA.

At this point, most people aren't watching Black Mirror for its subtlety. Much of the show's seemingly ever-growing popularity resides in its ability to find clever, forceful ways to hit familiar dystopian notes of dread. You press play and expect to feel bad. That's at least part of what the ambiguous final montage is getting at: After we hear the final sniper shot fire out, probably killing Chris or Jaden, the camera cuts away to other characters and people in the world experiencing the moment as a fleeting data point in their daily news feed. It doesn't really matter who died or why. They see it, process it for a second, and then move on with their lives. It's similar to how you'll likely experience this rather unspectacular Black Mirror episode.