Bleach falls into the category of a hard-to-impossible anime series to adapt into a live-action movie, sporting a laundry list of potential pitfalls: the story's curtain between reality and an earthly spiritual realm, maximalist fight scenes, monstrous spirits, big ass swords, etc. There are myriad ways it could have gone wrong, but somehow, Bleach, produced by Warner Bros. and recently released on Netflix, turned out all right.

The anime, based on the serial manga by Tite Kubo, first premiered in the mid-aughts on Adult Swim in the US. Its late-night aura carried a bona fide swagger that matched the show's uncanny deftness in switching between frenetic and abusive action sequences to quirky slice-of-life humor, on top of its edgy, percussive soundtrack. Bleach automatically became the cool-kid anime for American audiences with cable (replaced by Death Note after Bleach was pulled following its original wrap), in large part thanks to its emotional maturity and darker story arcs that appealed to an older crowd than the after-school titles on Cartoon Network. And like Death Note, its massive popularity -- Bleach has sold 120 million single-issue copies worldwide, and it's one of the most-watched entry-level anime -- could have meant tons of disappointed fans if the live-action adaptation didn't deliver. 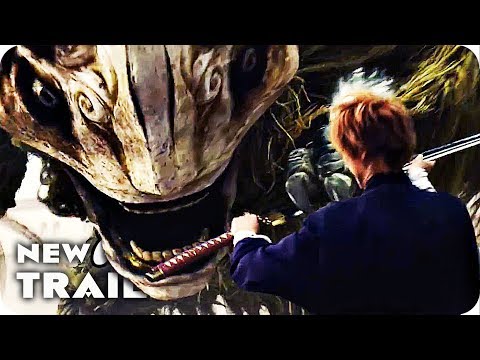 The explanation of Bleach's basic premise, especially and crucially for the uninitiated, is one of the movie's biggest victories over plenty of adaptations that have tried but failed to employ any straightforward world-building. Ichigo Kurosaki, played by the charming Sota Fukushi, is a defiant human high school student who acquires the powers to fight soul-eating spirit-monsters called Hollows and guide unsettled souls into the afterlife to a place called Soul Society (but mostly, defeat Hollows with gravity-defying swordsmanship). He takes on the duties of Rukia Kuchiki (Hana Sugisaki), a Soul Reaper who transfers her abilities to Ichigo when she's injured in a battle against a particularly gnarly Hollow, despite that exchange -- or becoming "attached" to humans in any capacity -- being against the Soul Reaper code. Ichigo's gain is Rukia's dire loss: Because her powers are so diminished, she has to take on a temporary form as a teen girl (convenient!) that transfers to Ichigo's class in order to keep him in line, both so she can train him to harness his unwieldy spiritual energy so he can transfer her powers back, and so he'll actually accept the selfless responsibilities of Soul Reaping. The open timeline for Rukia to turn back extinguishes when Soul Reaper central sends out assassins -- one of whom is her brother -- to either force her to kill Ichigo, or kill them both.

Those familiar with Bleach's arcs will probably recognize this as a truncated version of the anime's first season, which is basically exactly what this movie is, save for some event shuffling that fills in motivations the meditative character-driven episodes would have otherwise fleshed out. Several scenes, particularly in the first third, of the movie are faithfully remade from the anime's earliest episodes, which speaks to director Shinsuke Sato's acuity for the source material, and where it makes sense to deviate from it to fit a two-hour movie. There's Ichigo's classmates, including the lush Orihime Inoue and the laconic Chad Sado, boiled down to caricatures, and Uryū Ishida, the Quincy-affiliated rival, who all offer color without becoming too invested in a way that would overcomplicate the plot. Ichigo's interactions with his family remain some of the best comedic relief and most tender moments, hinging the movie's backbone on the mystery of Ichigo's mother's death when he was a young boy.

Sato, who has made a career for himself developing anime into live-action movies, very nearly pulls off the tricky tone that made Bleach so special, but does enough for the story at a net-positive success rate regardless. Most people in the Bleach universe can't see anything lurking in the spirit realm -- including the Soul Repears, who travel unnoticed -- and though there aren't many in the movie, some of the goofiest sight-gags emerge from cutting between what Ichigo and the spiritually aware can sense and what the rest of the world cannot. The biggest effects risk -- depicting the huge, fantastical Hollows -- is a CGI triumph that manages to render the battle scenes palpably heart racing, and the filmmakers weren't shy about tossing Ichigo 15 feet across an asphalt road in a bone-crushing way that looks believable.

Bleach isn't without flaws, of course. Not everything translates to live acting (the second assassin, Renji, is kind of lame) or through CG (casting a kindhearted spirit to Soul Society is also lame), and the cut-for-time developments between the characters leaves some of the relationships feeling hollow. Rukia, especially, doesn't get the space to flourish; her internal struggle is kept as pulled back as her ponytail. The lack of exposition between Rukia and Ichigo doesn't develop the same deep rapport found in the source materials, and by the time the high-stakes ending rolls around, when Rukia has to make a decision to save Ichigo, the full range of the emotional impact feels stunted and abrupt. But, with 16 seasons of anime and a long-running manga which wrapped up in 2016, there's a lot more content to mine from, and there's been speculation and early talks of drawing this adaptation out into a trilogy.

Even so, the movie is an attempted success that's garnered tons of favorable reviews from fans, and support from the manga's author Tite Kubo. For Netflix, which has tried this game twicebefore, it seems like third time's the charm.