Drew Scanlon had a big year.

Retired football player Terrell Owens used him when addressing his Hall of Fame snub; director Ava DuVernay and Stephen Colbert used him when referencing Donald Trump; hell, even a Dutch talk show used him. If you were living on the internet in 2017 and you were baffled by something? Scanlon was there for you. Blindsided by someone's idiocy? Scanlon was there for you too. In GIF form, at least. Scanlon's the man whose face you would have used to convey those reactions. He's the face of the 'White Guy Blinking" meme, one of the biggest of the year.

"It's been weirder for the people who know me than it has been for me," Scanlon, 31, tells Thrillist over the phone. When the meme exploded in February, his friends, family, and followers freaked. Some were stunned. Some applauded his comedic timing. Others wondered if he was Michael C. Hall or Cary Elwes from The Princess Bride. ("Nope, that's just my dumb face.") 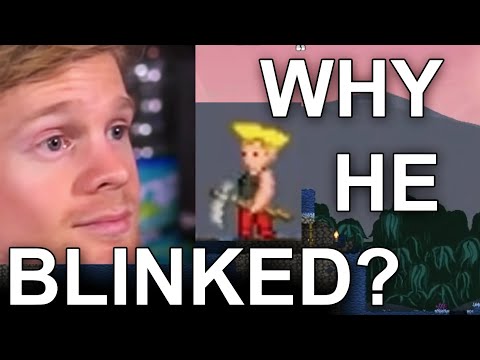 The GIF comes from a live stream shot in 2013, when Scanlon was a video producer at the popular gaming website Giant Bomb. During one of the team's weekly "Unprofessional Fridays" shows, Scanlon watched as editor-in-chief Jeff Gerstmann played Starbound, a two-dimensional action-adventure game. "I've been doing some farming," Gerstmann narrated, "with my hoe." Without missing a beat, Scanlon reacted much the same way Jim Halpert might have.

"When we're doing videos like that," Scanlon explains, "we're very aware of the audience."

"We deadpan a lot," adds Gerstmann. "When you get into double entendre and stuff like that, we just kind of plow through it and let the audience pick up the pieces. There's a lot of goofy shit in and around video games, so you're going to hit upon something like that along the way."

Gerstmann and his cohorts live to entertain -- "Unprofessional Fridays" is often a two-hour show after all -- and many of their finest, wackiest moments turn into GIFs circulated by Giant Bomb fans. In fact, if you search Scanlon's name, or "Giant Bomb" plus "GIFs," you'll find all sorts of weird shit. Getting memed is essentially part of the job description.

Giant Bomb's winks at the audience might be intentional, but in this case, what happened two years later was not. In 2015, a NeoGAF commenter zoomed in on Scanlon's fluttery eyes and used the now-famous GIF to react to a comic strip. In 2017, that same GIF erupted on Twitter and Instagram. "That wasn't one of the more popular [Giant Bomb GIFs at the time]," recalls Scanlon, "but for some reason, through internet chaos theory, that one rose to the top in early 2017." Why? Maybe it had something to do with the way GIF-sharing services were cataloging images. Or maybe it's because the GIF, when taken out of context, could extend outside video game circles to... almost anybody?

It did. And it became huge -- even earning unofficial Twitter accounts. But why now? Four years later? The GIF itself is a little more complex than the more image-macro, Impact-font memes that ruled 2013 (Grumpy Cat, Philosoraptor, and Ermahgerd girl to name a few). "I think the pervasiveness of it also has to do with the fact that there are so many crazy things happening in 2017," Scanlon says. "If it was more of a calmer year maybe we wouldn't see it as much." Fair.

The first major use of the meme Scanlon saw in the wild was this biology example, which cracked him up.

It's still one of Scanlon's favorites. "That showed the perfect way for [the GIF] to be used," he says. "It was just a really well-crafted tweet." Twitter users took the template and ran with it, catapulting Scanlon's blinks into the meme Hall of Fame. Cosmopolitan quickly called it the "most relatable meme ever," and by the end of 2017, it would become Tenor's most-used GIF of the year. The Giant Bomb audience still lets Scanlon know whenever they see their moms use it on Facebook. "That's how this stuff starts, right?" Gerstmann wonders. "The right person, the right place, the right time, and that stuff just takes off."

So, does being the face of a massively popular meme have its perks? Surprisingly, Scanlon is rarely recognized on the street or hounded for autographs. He provides a theory: "People don't expect memes to be real people. People understand that actors are real people that play in movies. But people don't expect that from me. Memes just come from the internet. That GIF is also so many times removed that when you see the original source it doesn't make any sense."

While there's little monetary gain in GIF virality (the original video is the property of CBS Interactive), being a famous meme does help with Scanlon's current project, Cloth Map, a Patreon-supported video series that examines the "similarities between cultures through the lens of games." You can't write his name without an obligatory parenthetical: Drew Scanlon (aka The Blinking White Guy). "That can only help," he says, "in terms of reach."

The fame also comes with a reminder. "When you're on camera so much, as part of your job, you develop a sort of filter," he says. "Or at least a sort of awareness of what you're saying." If you slip up, the internet lets you know. Users can sometimes take comments, or in this case, facial expressions, out of context. Thankfully, Scanlon's is fairly innocuous. "[Memes] can be really useful and interesting forms of expression," he adds, noting that they're almost like a language that has developed on the internet. When you're talking to someone in person, for example, you can respond with body language that contains nuance or subtext. You couldn't really do that in the days of AIM. Now? You can. Scanlon just hopes that -- like many good things on the internet -- his face isn't one day used for evil.