More often than not, when the Greek gods are portrayed in pop culture, they are mostly reflections of the Judeo-Christian God, omnipotent and perfect beings who show up only to reward or to punish severely before disappearing into their heavenly domain. At their worst, they are arrogant, like when Liam Neeson's Zeus threatens to murder all citizens of Argos so they'll worship him in Clash of the Titans. But Netflix's latest anime-style series, Blood of Zeus, will change how you look at the Greek pantheon by recognizing the gods are simply characters in an epic soap opera full of infidelity, violence, and giant monsters.

Showrunners Charley and Vlas Parlapanides take us back many eons ago to a time of gods, heroes, and giants. The two are no strangers to tales of Greek mythology, having worked on the Henry Cavill-starring Immortals in 2011, and use the classic hero's journey to lure you into a sense of academic familiarity with Blood of Zeus, bringing out many of the major gods and showing off their otherworldly powers. At just eight episodes, the story follows Heron, a young man ostracized by his community, who one day discovers he's actually the latest bastard son of Zeus, and it is his fate to save the world from an awakened ancient evil that threatens to destroy the world. In many ways, this feels like a retelling of other stories you've heard before, but by framing it as an ancient myth lost to time, Blood of Zeus is able to focus on what really makes this special: its dramatic depiction of the gods and their more human foibles.

While our protagonist is in a classic epic adventure, the show pulls back and dives into an aspect of the Greek pantheon that's essential to the mythology, but hasn't been explored much in pop culture: Zeus's many, many affairs. Zeus, for all his might, is not infallible, and the god can't seem to be able to keep it in his pants, and the fact that he keeps bringing his bastards home to Olympus causes great anger among the other gods who consider his behavior shameful. Then there's Zeus' wife, Hera, who is considerably angry and resentful, not only of the infidelity itself, but of the disrespect Zeus shows the Queen of Olympus through it. 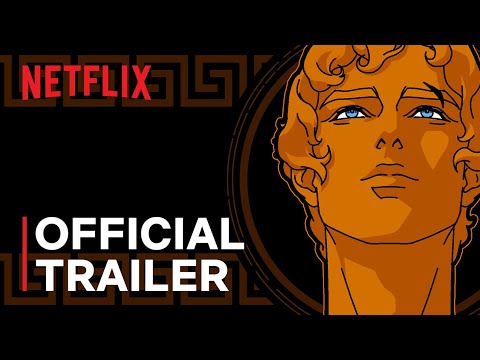 Just like a soap opera, or even Game of Thrones, these gods are constantly scheming and using each other as chess pieces, which only means trouble for the poor mortals on the ground that suffer the consequences. Powerhouse Animation, the studio behind other Netflix anime series Castlevania and Seis Manos, delivers their best work in Blood of Zeus, with action scenes worthy of the epic poems about heroes and gods. Taking the studio's signature style of hyperviolence to new heights—there's a brutal beheading about 45 seconds into the first episode—the show features big set piece after big set piece, with at least one beautifully animated action scene in each installment, without making it feel repetitive. Whether it's flashbacks to battles of gods and giants or introducing terrifying classic monsters like Cerberus, the action in Blood of Zeus keeps building up until it reaches its big payoff in its last couple of episodes. The addition of monsters and ample gore also makes this a fantastic late addition to your Halloween watchlist.

It also helps that the action is complemented by an appropriately theatric orchestral score that highlights the grand nature of Heron's journey. That the music also incorporates astonishing choral chants add to the feel of a mythical movie of old, like Ben-Hur or Jason and the Argonauts, while the animation makes the show feel intense enough that it simply couldn't be replicated in live-action.

The character designs in Blood of Zeus look unlike anything Powerhouse Animation has done so far, with the characters—particularly Heron—looking like they come straight from ancient Greek vases and sculptures, adding to the feel that this story could only be done properly in animation. Even more so, Blood of Zeus feels distinct from all the live-action epics that influenced it by having a distinct variety of skin tones for its characters. The ancient Greek world was vast and included people of many backgrounds, so it's refreshing to have an anime that avoids the genre's big race problem by having diversity of skin tone in a nuanced way that reflects the reality of the world.

By now, Netflix is becoming a powerful player in the anime space, and Powerhouse Animation is a key part of it, but with Blood of Zeus it seems to reach new heights. This Greek epic feels just familiar enough to seem like an actual myth lost to time, but fresh enough to surprise audiences familiar with Greek mythology. With great characters, massive set pieces, and enough twists and turns to keep audiences on their toes, by Zeus, this show deserves a second season.