Everything We Know About 'Bosch' Season 7

The final season is out now, but it won't be the last time we see Amazon's favorite detective.

When the first episode of the excellent detective drama Bosch premiered in 2014, it arrived as part of Amazon's first wave of pilots, which debuted on Prime and could then be voted on by viewers. While that crowdsourced development process never really caught on, Bosch did, and the entire first season premiered in 2015, with a new season following every subsequent spring like clockwork. Like the Michael Connelly novels that Bosch draws inspiration from, consistency is part of the appeal: Whether he's investigating the death of a sleazy pornographer or foiling a shady drug ring, Bosch always gets the job done.

While pandemic delays have disrupted the pattern, the seventh season of Bosch, announced back in February 2020 and now available on Prime, will be the series' last—at least in this iteration. Amazon's longest-running original series is finally drawing to a close, putting Bosch on one more endlessly complicated, seemingly unsolvable case. Will this really be your last chance to see actor Titus Welliver sporting his signature rope bracelet? Investigate further into this article to find out.

Is Season 7 of Bosch on Amazon Prime now?

Yes! Bosch's final season is now available to stream on Prime. Unlike the previous seasons, which consisted of 10 episodes, the last season only has eight episodes. The first episode is titled "Brazen" and was written by executive producer Eric Overmyer.

Bosch was renewed for a seventh and final season in February 2020, before the sixth season premiered. In the announcement, author Michael Connelly, who has co-written multiple episodes and serves as an executive producer on the series, expressed some disappointment in seeing the series come to an end. After all, there are over 22 novels in the ongoing Bosch book series, which began in 1992 with the publication of The Black Echo.

“I’m proud of what we have accomplished with Bosch and look forward to completing the story in Season 7," said Connelley in the announcement. "It’s bittersweet, but all good things come to an end, and I am happy that we will be able to go out the way we want to."

When did Bosch Season 7 premiere?

Though new seasons of Bosch typically premiere in April, the final season premiered on Amazon Prime on Friday, June 25. Like many shows, production on Bosch was delayed because of the ongoing pandemic. In fact, the series was filming in Los Angeles last fall but, according to Deadline, had to be shut down for a week because of a positive COVID test. 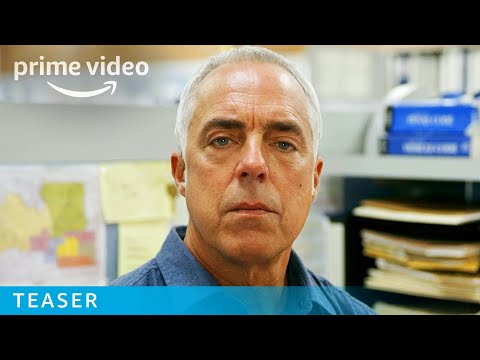 Is there a trailer for Season 7 of Bosch?

Yes, there's a teaser trailer for Bosch Season 7. It doesn't exactly have a lot of footage in it, but it's got some bits of drama and some good Bosch scowling.

The show is still called Bosch, so expect to see Hieronymus "Harry" Bosch (Titus Welliver of Deadwood and Lost) doing normal Bosch things, like solving crimes and listening to jazz records. Bosch's daughter, Madeline Bosch (Madison Lintz), will continue to be part of the rich tapestry of Bosch's life, and so will Bosch's partner Jerry Edgar (Jamie Hector of The Wire). Expect to see familiar faces from the cast like Amy Aquino, Lance Reddick, and Mimi Rogers playing former Bosch-foe attorney Honey "Money" Chandler, who will have a larger role in the upcoming spin-off. (Yes, there's a Bosch spinoff—more on that below.)

Season 7 will also introduce some new faces to the Bosch cast. Back in October, 2020, Deadline reported that Gino Vento (Mayans M.C.) and Carlos Miranda (Vida) will have recurring roles. Vento will play a character named Mickey, while Miranda will play Det. Chris Collins.

What is Season 7 of Bosch about?

Bosch seasons often draw on multiple storylines from Connelly's novels, weaving plot threads together and allowing them to converge at the end of a season. The last season won't be messing with the tried-and-true formula very much. According to the Season 7 announcement, the final episodes draw on The Concrete Blonde, the third Bosch novel published in 1994, and The Burning Room, the seventeenth Bosch novel published in 2014. The older novel involves the hunt for a serial killer known as "The Dollmaker" and the newer one involves the death of a mariachi performer and solving of an arson case.

Here's the synopsis from the initial announcement: "The seventh and final season of Bosch will have Harry Bosch (Welliver) and Jerry Edgar (Jamie Hector) pursuing two separate but perilous murder investigations that will take them to the highest levels of white-collar crime and the deadly depths of the street-level drug trade."

It's perhaps worth noting that The Burning Room follows Bosch as he prepares to retire from the force. The subsequent Bosch novels have followed Bosch in retirement, and it sounds like the new Bosch spinoff in development will do the same.

What do we know about the Bosch spinoff?

When Season 7 was announced as the final Bosch season, something felt off. In theory, Bosch is the type of reliable show that could run for at least 10 or 12 seasons. Why stop at seven? There are always more Bosch stories to tell, the show appears to be quite popular, and Welliver seems to really like playing the role. Could this really be the end?

It turns out, the people involved with Bosch had a similar reaction to the show ending. In March 2021, Amazon announced that a Bosch spinoff, following the adventures of Bosch, his daughter Madeline, and attorney Honey "Money" Chandler (Mimi Rogers), will soon land on Amazon's ad-supported IMDb TV streaming platform.

"To say I am ecstatic is an understatement! To be given the opportunity to tell more Harry Bosch stories is a tremendous gift,” said Welliver, in the spinoff announcement. "The process of shooting season seven with the shadow of it being our final loomed heavily, so when the idea was presented to continue with the possibility of a spinoff, without hesitation I said, 'Let’s go.' To all of our Bosch fans, thank you for your incredible support for all these years and I can promise you the ride will only get better."

Much of the creative team involved with Bosch, including series creator Eric Overmyer and author Michael Connelly, will also be involved in the new series, which follows our favorite grizzled detective in the next phase of his career. So, basically, even though Bosch (the show) is ending, Bosch (the character) isn't going anywhere.