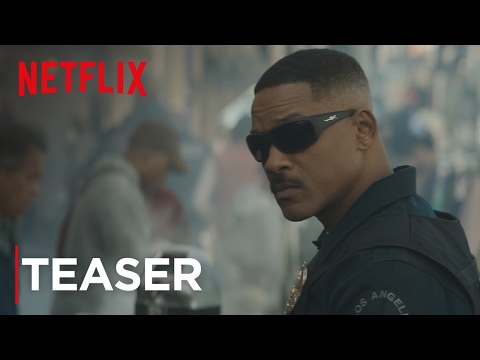 We've seen Will Smith fight aliens many times, but can he hold his own against orcs, elves, and fairies? That's the question at the heart of Netflix's Bright, which finds the Men in Black star re-teaming with his Suicide Squad director David Ayer for a cops-versus-fantasy-creatures thriller. Think of it like Training Day but with a touch of Lord of the Rings. Or an episode of Cops mixed with Game of Thrones.

The brief clip, which premiered during last night's Oscars ceremony, doesn't give you many plot details, but does feature some menacing images of L.A. streets, a creaky recording of "This Land is Your Land," and a cool shot of Smith wielding what looks like a wooden sword. (Should he be worried about splinters?) Joel Edgerton, Noomi Rapace, and Ike Barinholtz also star in this gritty action thriller, which was penned by Chronicle writer Max Landis.

You'll be able to find out if this is a return to form for the one time Bad Boy -- or a fascinating dud like Collateral Beauty -- when Bright hits Netflix in December.

Dan Jackson is a staff writer at Thrillist Entertainment and he hopes Will Smith says "Welcome to Earth" in this movie. He's on Twitter @danielvjackson.
Thrillist TV
History of
The History of Tailgating