The phrase "bye bye" likely reminds you of that one SNL skit with David Spade, the incessant cooing of Ann-Margret, or that *NSYNC ballad. But The Bye Bye Man, a "based on true events" horror film now in theaters, hopes to disrupt the baby-talk farewell space by introducing movie audiences to a menacing boogeyman doing business by that name.

Does the movie deliver the goods? At a lean 96 minutes, The Bye Bye Man -- directed by Stacy Title (Snoop Dogg's Hood of Horror) from a screenplay by her husband (and former Survivor contestant!) Jonathan Penner -- is certainly a short, jump-scare filled thriller. But it's fighting an uphill, PG-13 battle against its title from the very first frame. No matter how scary the trailers are or how chilling the poster is, a villain named "the Bye Bye Man" with a big CGI dog sidekick (yes, in the movie, the Bye Bye Man has a big CGI dog) simply lacks the elegantly unnerving quality of a moniker like Slender Man.

But don't giggle too hard at the Bye Bye Man or he just might hunt you down. Because he's real. Sort of. How "true" is the so-called true story he's based on? We donned a frightening cloak and did some digging to find out. 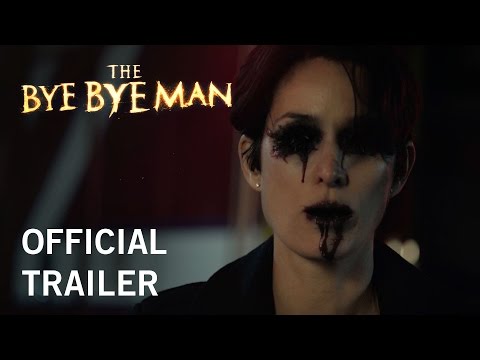 The Bye Bye Man comes from a book

The creators of this film did not coin the idea of the "Bye Bye Man." The concept for the movie comes from a collection of strange but true tales called The President's Vampire by Robert Damon Schneck, a writer who specializes in the paranormal and has written for publications like Fortean Times. With the movie coming out, the book is being sold with the Bye Bye Man on the cover. It's finally his chance to step out of the shadows.

The rebranding is an interesting choice because the story that inspired The Bye Bye Man, originally titled "The Bridge to Body Island," is an anomaly for Schneck: according to this Bookslut interview from 2014, most of his work comes packed with footnotes and heavily-sourced research. "This is real history," he says. "I treat it with respect, the same respect as a historian writing about the Battle of Gettysburg. A lot of this stuff is dismissed. I'm trying to give it some weight so people realize there's value."

However, the story of the Bye Bye Man readily blurs fact and fiction.The version of the tale in the book arrives with a warning: "This story is different from all the others in this book. First, the source is a close friend. Second, though this might sound dramatic, readers who are genuinely frightened by the paranormal or troubled by obsessive thoughts should consider skipping this chapter."

Like the movie, Schneck's version of the tale is also set in Wisconsin, but it involves a Ouija board, which the film does away with -- perhaps because there's already a Ouija franchise out there. Obviously, the story of the Bye Bye Man should be taken with a grain of eerie salt. If you go searching for newspaper clippings, magazine articles, or true crime documentaries about this particular killer, you'll be disappointed. He's not exactly the most media savvy ghost out there.

What's the Bye Bye Man like in the movie?

In a plot that should sound familiar to fans of The Ring, Final Destination, or the 2014 indie hit It Follows, The Bye Bye Man focuses on a group of college students in Madison, Wisconsin, who find themselves under the psychic influence of a mysterious force that can be passed to other people. The movie's Joy Division-shirt sporting hero Elliot (Big Love's Douglas Smith) moves into a large, spooky house with his girlfriend Sasha (Cressida Bonas) and his best friend (Lucien Laviscount), and soon discovers a nightstand with the the title of the movie scrawled on the inside. Yes, The Bye Bye Man is a parable about the dangers of off-campus housing.

After a late-night seance-session led by a psychic goth friend, the group makes contact with the Bye Bye Man, a cloaked figure who looks like one of those dipped-in-milk Westworld hosts, only one with scars on his face. From there, he lingers in the background of shots. He scratches up the house. He lurks. But most importantly, he causes the young protagonists of the movie to have life-like visions of worms, horrific accidents, and, in Elliot's case, his best friend having sex with his girlfriend.

There's no elaborate flashback that explains the origin of the Bye Bye Man, but the movie opens with a quick prologue set in 1969 involving a deranged, shotgun-wielding reporter. In the present day, we eventually meet this reporter's wife (who is, amazingly, played by screen icon Faye Dunaway) as well as a tough-talking detective (The Matrix's Carrie Anne-Moss) who can't crack the case. But mostly we get lots of scenes of people mumbling "don't say it, don't think it" to themselves. As the body count starts to pile up, you might ask yourself, Why does he call himself the Bye Bye Man? Were all the other names taken? Did he lose a bet?

People love scary stories with a hint of veracity. Like any internet-age urban legend, there are accounts of the Bye Bye Man floating around on web forums like ParanormalSoup, AmityvilleFAQ, and eBaumsworld. If you have a taste for the GeoCities aesthetic, check out a telling of the story on a website called Unsolved Mysteries. These accounts explain that the Bye Bye Man was a blind albino orphan born in early 20th century Louisiana who eventually became a serial killer. He would leave his victims by the train tracks, a detail the movie makes (confusing) reference to in a few scenes. Unsurprisingly, black magic was involved.

Why do filmmakers and storytellers keep going back to these urban legends? As even the Coen Brothers can tell you, a "based on a true story" note can add a sense of authenticity to any twist-filled tale. For studios producing horror films, it's also clearly a marketing angle: no matter how outlandish your premise sounds, an aroma of "truthiness" can make your supernatural movie stand out in a crowded market place. Ask the creators behind The Conjuring, The Blair Witch, or even The Exorcist.

That connection to the real world doesn't guarantee the movie will work. As a way of creating suspense, it's a scattershot method -- The Bye Bye Man isn't any scarier because of its origin as an urban legend -- but as a sales tactic, it's an effective way to get skeptical viewers in the seats. If The Bye Bye Man can get you to say "bye bye" to your money, than he's doing his job. You might snicker at his name, but he's laughing all the way to the bank.

Dan Jackson is a staff writer at Thrillist Entertainment and dares you to refer to him as the Hi Hi Man. He's on Twitter @danielvjackson.