The Creamed Spinach and Poached Eggs in 'Carol' Sounds Delicious

The hotly debated dish ordered by Cate Blanchett's Carol in the movie 'Carol,' along with a martini, is NOT disgusting, as people have suggested.

With temperatures dropping and holiday decorations starting to go up, it's officially Carol season. Five years ago, Todd Haynes' Carol came out and was immediately hailed as a new classic of queer cinema. The wintery romance based on Patricia Highsmith's novel The Price of Salt stars Cate Blanchett as the titular Carol, a self-possessed housewife who woos shopgirl Therese Belivet, played by Rooney Mara. It's a gorgeous, heartbreaking film, available to watch on Netflix, that has also stirred up a culinary debate. Creamed spinach and poached eggs: good or gross?

Obviously, the answer is: What the hell are you talking about? That meal sounds amazing and I would eat it in a heartbeat. But let's back up a second.

After leaving her glove at the department store where Therese works, Carol invites the younger woman out for lunch at a darkened bar, the air heavy with smoke and presumably the smell of 1950s hair products. Immediately upon sitting down, Carol places her order: "Creamed spinach over poached eggs and a dry martini with an olive." Therese, slightly flabbergasted, puts in the same order.

At the 2016 Independent Spirit Awards, hosts Kumail Nanjiani and Kate McKinnon parodied the scene, with McKinnon playing Carol and Nanjiani playing the clueless waitress at the restaurant. When she puts in her order, Nanjiani responds: "Very good choice, that is our most disgusting meal." Look on Twitter and you'll find other people voicing their distaste for Carol's go-to lunch. For example: "I'm absolutely not sorry to say this, but creamed spinach and poached eggs is a [sic] awful order. No, just no, absolutely no." And: "carol orders the grossest lunch. who wants fucking creamed spinach over poached eggs?" 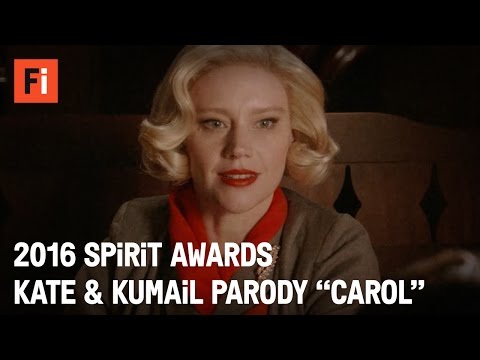 There are dissenters, like this smart person: "wish everyone would grow up and admit that a martini with poached eggs over creamed spinach sounds good, actually!" Hell yeah, it does!

Truthfully, I've never been totally sure what grosses people out about this order. Is it the "creamed" part of the spinach? Because eggs and spinach are a common combination. If so, what do you have against creamed spinach? It's one of the most delicious side dishes there is! You can't go to some place like Peter Luger's and not get the creamed spinach as one of your side dishes with a hunk of steak. Pair that with poached eggs, and you've got the decadent yolk bleeding into the greens' buttery sauce. Sure, it's rich, but it tastes good.

Maybe, for some, it's the martini that does it. But think of the tart, cold vodka cutting the soft, luscious mush on your plate. Delicious! Plus, people pair incongruous alcohol with food all the time. I'll never understand ordering, say, a Bloody Mary and pancakes, for example. But people do it. Are people just anti-egg? Then you'll be banished into the egg hater corner along with known egg hater Guy Fieri. Is it the texture, in that it is essentially texture-less? This dish is basically just slime, I'll admit that. Add some toast points! You'll be fine!

This is all to say: Over the holidays, it's your duty to watch Carol. Not just because it's a near-perfect movie that conjures all the longing and loneliness of the time, but also because it features a dish that I would eat right now if you gave it to me. Can someone give it to me? Thanks.